In the legal sense, a writ is a written order, issued by a court, ordering someone to do or stop doing something. It has authority, the power to enforce compliance. We all enjoy many rights such as the Right to life, Right to education, Right to Dignity, etc. but we can only enjoy these rights if they are protected. Thus, writs are the constitutional remedies to protect our fundamental rights. 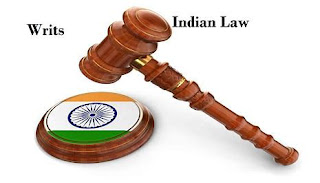 Rudul Sah v. State of Bihar (AIR 1983 SC 1086)
In this case, an individual who already completed his period of imprisonment was illegally detained in jail for extra fourteen years. The writ of Habeas Corpus was used and the individual was immediately released from detention and was awarded exemplary damages.

It is a Latin terminology that means ‘we command’. It is a kind of command which can be used on constitutional, statutory, non-statutory, universities, tribunals, etc body for performing their public duty. This writ is used to make a public official perform the public duty assigned to them. The only condition to apply this writ is that there should be a public duty.
Gujrat State Financial Corporation v. Lotus Hotels (AIR 1983 SC 848)
In this case, the Gujrat State Financial Corporation had an agreement with Lotus Hotels and stated that they will release their funds so that they can continue with their construction work. But, later they did not release the funds. So, Lotus Hotels appealed its case in Gujrat High Court which issued the writ of mandamus which stated that Gujrat State Financial Corporation has to fulfil its public duty as promised.

There is a very limited difference between the writ of prohibition and the writ of certiorari. The proverb ‘Prevention is better than cure’ shows the perfect difference between the two writs. Here, prevention is related to prohibition which means ‘to forbid’ and certiorari relates to cure. If a judgement is delivered and it is illegal then to rectify that mistake it is quashed and writ of certiorari is issued which is termed as a cure but if the judgement is yet to be announced and to stop that mistake to occur then the writ of prohibition is issued. This writ can only be used until the judgemnent has not been delivered.

The power of issuing writs is also given under Article 226 of the Constitution of India, 1949. Under Article 226 of the Constitution of India, 1949 an individual whose fundamental right has been violated can approach any High Court of the country. This power has been restored in our Indian Constitution so that any individual can go to the highest authority with their concerned problems. But if any individual directly approaches the Supreme Court of India without going to the High Court then proper valid reasoning has to be stated.