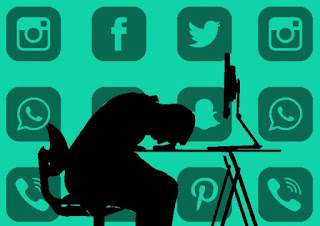 Social media platforms have acquired centre-stage in the 21st century period. It has varying impacts on each and every section of the society which includes individual, national and global levels. On one hand, social media platforms provide the means to exchange views, gather information, increased outreach and connectivity across the globe, and on the other hand, they haveled to increased gender vulnerabilities, cyber-crimes, anonymity, and internal security issues, social censure, stringent regulation, and global cooperation.

Social media attributes to interactive digitally-mediated technologies that facilitate the users to create, share content, socialize, and participate in social networking. Social media fosters encouragement, openness, communication, community participation, and connectedness across the globe. In everyday parlance, social media is usually seen as synonymous with Facebook, Instagram, YouTube, WhatsApp, LinkedIn, etc. but in actuality it has a much wider scope.

HOW HAS SOCIAL MEDIA DEVIATED BASIC NOTIONS OF FREE SPEECH AND EXPRESSION?

Freedom of Speech and Expression is the basic fundamental right available to all the citizens of the country and is enshrined under Article 19 of the constitution of India.[1]The Freedom of speech is a pillar on which our democracy stands. It promotes debates, discussions, scientific inquiry, and political dissent. It is the basic tool to make democracy more participative in nature. It also acts as a harbinger of innovation. The Freedom of Journalism and the Freedom of the Press are all inherent under the ambit of free speech and expression.

But nowadays, social media has changed various notions, it has increasingly encouraged bigotry, divisive norms, terrorism activities, lone-wolf attacks, political advertising, and security threat. It is not really balanced. Also, social media has become one of the fastest medium of fake information and fake news, sometimes leading to riots and fights between different segments of the civilization. Social media has led to increased religious fundamentalism or radicalism which hinders societal cohesion.

Furthermore, with the increasing use of social media platforms for spreading information and news, a lot of online content is generated due to which the incentives of investing in the bonafide information are declining. Now, the media is focusing more on the exclusivity of the content rather than its authenticity. The 24/7 news platforms running continuously on social media has increased the ‘breaking-news culture’, ‘sensationalism’, ‘less authentic data’, ‘less evidence-based information’, etc. Fake news is becoming more popular and is spreading like wildfires in society.

The economics of information generation and its distribution has also changed. Conventionally, the information was controlled by the writers but in contemporary times, it is all controlled by the tech and coders. It has gone beyond the control of the reporters and is now controlled by the search-engine optimisers, coders, etc. A lot of our assumptions about free speech and expression have also been challenged. Because of the abovementioned dynamics, the traditional notions of free speech are now crumbling. The lack of rules and regulations is actually impacting ‘Freedom of speech in spirit’. Today, free speech is eventually misused and monopolised by giant tech-companies like Facebook, Amazon, Apple, Netflix, Google, and Snapchat. In fact, online mediums have the capability of ‘micro-targeting their users’ which is done by using cookies, preferences, biases by utilizing the previous searches of the users and targeting particular information to particular users. This has been done in Russia and the United States election. Also, the suggestions provided on the YouTube home page on the basis of previous searches made by the users impose opinions on the minds of the people using it. Rather than developing ideas and opinions, they promote their views and beliefs.

In the older times, the anti-social and abusive behaviour would get socially penalized in diverse ways which include, social censure, social penalties, isolation, and strict sanctions. This all could take place because our norms were rigid, the identity of the perpetuator was known. But now, our norms are more fluid and there is the anonymity of users. Due to this, anti-social behaviour can find its kind very easily and can form their community.

HOW SOCIAL MEDIA IS A DOUBLE-EDGED SWORD FOR WOMEN?

Nowadays, social media has become a channel for empowering the broader attention of the community at large. It provides a level playing field by allowing all the individual voices froman extensive range of backgrounds to be heard.Various movements like #MeToo movement for public attention to sexual harassment, #LikeAGirl campaign to curb gender stereotyping and increase confidence among girls, #HeForShe campaign to highlight the need for the involvement of men for achieving gender equality, are some examples to illustrate the powerful effect of social media. It has become a tool for women to campaign against various issues like gender stereotyping, gender suppression, etc. While social media has played a significant role in enabling women’s voice to be heard, it fails to curb the harmful and toxic contents by its users. Women are subjected to slut-shaming, name-calling, and abuse, distasteful comments, etc. Women are the most vulnerable to cyber abuses like online harassment, stalking, hate speech, and so on. Rapists use social media as a tool to threaten their victims to not report the crime. Whenever any woman tries to break the misogynistic social norms, social media platforms are used to silence their voice by giving them rape and death threats. Furthermore, some women are even vulnerable to cyberstalking because of their online presence. Often fake profiles are made to malign the reputation of the victim by uploading vulgar or obscene photos of the victim.

HOW CHANGING SOCIAL MEDIA DIMENSIONS IMPACT THE SOCIAL SECURITY OF A COUNTRY?

Social media platforms are being used by security and law enforcement agencies for sustaining internal security. The organizations use them to gauge the mood of the citizens on various issues, predict the possible flashpoint of disturbances, and prevention of cyber-crimes. The social media platforms act as actionable intelligence that may support human efforts and could be used by various agencies for maintaining peace and harmony in the nation. Social media also increases the speed of information-sharing procedures and hastens the decision-making processes. It can be used to engross with the citizens to build safe and secure communities.

However, social media causes a huge challenge to the internal security of the realm. Few illustrations include London riots, Moldavian twitter riots, Arab freedom movements, etc. The increasing use of social media platforms by terrorist organisations for ideological radicalisation, recruitment, communication, and training is a global threat. The terrorist groups release videos of mass killing, beheading on social media platforms to show their power and presence.

Additionally, social media platforms have been used extensively for spreading riots. The reckless forwarding of messages without checking their authenticity, the unregulated social media posts, spreading misinformation, using morphed images, and doctored videos, which may or may not relate to the incident are increasingly used and circulated to propagate and provoke the anti-social sentiments. Such incidents are then used by the sleeper cells, and other terrorist organisations to create massive damage and threaten the national security of the country.It has a potential for disrupting public order through the unchecked spread of rumours with an intention of creating enmity between the groups.

HOW HAS THE OPEN SOCIAL MEDIA LIMITED THE MENTAL EVOLUTION OF THE YOUTH?

Social media can also have adverse impacts at an individual level. In recent times, the use of social media among children has increased drastically. There are diverse problems associated with increasing social media exposure which includes psychological and health problems such as vision problems, improper sleep, fatigue, lack of exercise, etc., addiction to social media platforms, problems of FOMO (Fear of Missing Out) heading to jealousy, trolls, abuses, the commodification of public life as all the aspects of life are open for public consumption, feeling of depression, problems of cybercrime and privacy issues. At an individual level, a person’s life has become limited to social media only, there is no face-to-face interaction and communication. People are just struggling to maintain their class and standards on social media by showing off things and also getting affected by continuously comparing their lives with others.

WHAT IS THE WAY FORWARD TO TACKLE SOCIAL MEDIA PROBLEMS?

In recent times, social media has shown various double standards. And it becomes necessary to restrict and regulate the various platforms of social media. Situations have worsened to such a level that the judiciary had to intervene to tackle the problems that have emerged from social media. The Supreme court has expressed its concern for mean-spirited comments, trolls, and aggressive reactions on social media platforms on almost every issue including Judges and judicial proceedings.

Under the existing legal frameworks, Sections 69 and 69(A) of the Information Technology Act, 2000[2]authorizes the government to give directions for blocking information for public access and monitor the information through any computer resource when situations threaten public order, defence, security, sovereignty, and integrity of India. The issues of privacy are being tackled by technology and better laws.

Now, the government needs to ensure better policy formulation and implementation of strict privacy laws, a strict cybersecurity system with better law enforcement, and awareness among the citizens. Social media needs regulation. There is a need to decide what is acceptable behaviour on social media platforms and how to penalise and censure. Neither government nor private censorship alone will work. We require a fine balance between the two in order to have a more citizen-friendly social media environment.