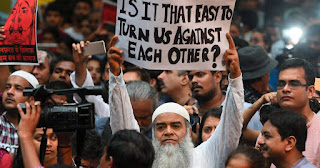 Blasphemy law prohibits Blasphemy, which is insult or disrespect to God, religious texts, or feelings. It is derived from the Greek term “blasphmia,” translated from Latin to Old French to Middle English[1]. Blasphemy is commonly defined as the act or action of speaking sacrilegiously about God or sacred objects, which is associated with irreverence and disdain for God or Christ. In AD 325, the concept of Blasphemy was initiated and originated in Greece. Its evolution was accelerated as the concept of monotheism was formed. Jews provided the idea of Blasphemy a relatively fixed form about the 12th or 13th century[2]. It became legal in Europe in the 13th century, with the critical case of John Taylor in 1675 encapsulating the definition of Blasphemy in the framework of a state. Justice described Blasphemy as “treason against the state and the law itself.” In contemporary times, Blasphemy has been defined as ‘the action or transgression of speaking sacrilegiously about God or sacred things.[3] Blasphemy as an idea is itself strongly condemned in all religious scriptures texts and holy books. Śrīmad-Bhāgavatam verse 4.4.17 says, “If one hears an irresponsible individual blaspheme the master and controller of religion, one should cover his ears and leave if he cannot be punished. However, suppose one can kill. In that case, he should forcefully cut out the blasphemer’s tongue and kill the offender. Then he should give up his own life”.[4]The holy Quran in (Q 6:108) discourages the practice of Blasphemy by asking the believers by quoting (6:108), “Do not revile those whom they invoke other than Allah, because they will revile Allah in ignorance out of spite. For We have indeed made the deeds of every people seem fair to them. Then, their return is to their Lord, and He will inform them of what they have done”.[5]Over 25% of the countries have recognized Blasphemy as a crime and have established penal provisions against it. However, Pakistan and Iran are the only countries to have capital punishment for these acts. The term blasphemy does not come alone. It brings Hate speech along. The discrepancy lies in the interpretation of the term Hate Speech. It has not been defined anywhere in any of the law books or legislation. So, now what constitutes a hate crime? Courts have given various interpretations of this word in multiple scenarios. . In my opinion, what constitutes a hate crime may not have enough ingredients to constitute hate crime for you. Section 295A was added to the Indian Penal Code in 1927 to prohibit hate speech[6]that insults or makes an attempt to insult the religion or religious beliefs of any class of citizens, as well as the purposeful and malicious intention to uproar their religious sentiments; however, the primary purpose of the law was to maintain “public order in a multi-religious and religiously sensitive society.”[7]

The publication of tracks such as Rangeela Rasool, which insulted the prophet Mohammed, took place in the 1920s, primarily as the first time collision between Hindus and Muslims in the context of Blasphemy. Then, in response to Muslim community pressure, the British administration adopted a new amendment and added section 295-A to the Indian penal code in 1927. In 1927, the subcontinent’s British colonial rulers made it a crime to do “deliberate and malicious acts intended to outrage religious emotions of any class by insulting its religious belief.” The law made no distinction between religions. The law made no distinction between religions. The statute was kept after Pakistan obtained independence in 1947, under the moderate leadership of the country’s founder, Mohammad Ali Jinnah. Then, in 1977, Mohammad Zia Haq, who ruled for 11 years, added to the country’s blasphemy laws, including life imprisonment for individuals disrespecting the holy Quran. In 1986, the death sentence was imposed on anyone found guilty of defaming Islam.[8]

The word “secular” was added to the Indian constitution by the 42nd amendment[9], which states unequivocally that India is a secular country and that the state will not interfere in the religious affairs of the people because all religions are equal in the eyes of the state or the state does not have its religion. Blasphemy law prohibits Blasphemy, which is contempt or insult to religious images, religious groups, sacred artefacts, rituals, or beliefs. Specific provisions from the Indian Penal Code are used to protect the interest and believes of the spiritual, particularly Muslims, Christians and Hindus. Apart from those, the country does not have any specific legislation or rules against Blasphemy. Section 295 A section 153A read together makes laws for Blasphemy for the nation. In Ramji Lal Modi vs. State of U.P[10]., a Constitution Bench of the Supreme Court upheld the constitutionality of the previous section in 1957. The Court ruled that Section 295A of the IPC does not punish any act or attempt to insult any religion or the religious beliefs of a class of individuals. The Court stressed that only acts of abuse or attempts to insult that is committed with the deliberate and malicious goal of outraging the religious emotions of that class can be punished under this Article. The Court went on to say that the clause would only apply to severe forms of religious insult likely to disrupt public order.[11]Maintenance of public order and free speech comes in with specific reasonable restrictions in article 19(2) in the constitution. Section 295A of the Indian Penal Code, enacted by the British Raj in 1932, is a highly draconian blasphemy law. Section 124A of India’s sedition statute, likewise introduced by the Raj, prohibits “anti-national” remarks[12]. As a result of religion, free expression has frequently been restricted; furthermore, there has been a tremendous backlash against the blasphemy law within the framework of the modernist tradition, which strives to go beyond the irrationality of religion. Section 153A of the Indian Penal Code criminalizes hate speech and prescribes punishment for offences.The promotion of animosity between sections of society on grounds such as religion and race, place of birth, residence language, and so on, and actions that are detrimental to maintaining harmony are punishable by imprisonment for up to five years a fine.[13]

The idea of free speech in India comes in with reasonable restrictions as per the constitution. The provisions were added to maintain public order and unity among the citizens and protect individuals’ rights. The British brought laws relating to Blasphemy and hate speech in India, which to date has the same interpretation and is taken as its literal meaning.  As Indian citizens, we abide by all the reasonable restrictions imposed. We have never questioned these reasonable restrictions in the context of laws related to Blasphemy and hate speech being specific provisions like 295A and 153A in place.   J.S. MILL in “On Liberty” and Milton in “Areopagitica” advocated for making the globe a free marketplace of ideas where one type of thought shall not be restricted by state or society to help society attain its full potential. Hate speech lacks a concrete definition that distinguishes ‘hateful’ from ‘not hateful,’ hence it has been a contentious issue in our constitution about the scope of freedom of speech and expression. The problem does not end here. In recent times, we have witnessed many politicians being accused of hate speech during elections. Strict laws are necessary to prevent hate speech in future. Hate speech has also become an issue on social media platforms, as the propagation of misinformation on these sites is frequent these days. Trolls on social media are another significant source of concern for social networking platforms. To conclude, I would like to leave it up to the reader to decide whether the state shall be given the power to interfere with a personal matter of religion in a secular state or to what extent the state should be given power to decide upon the matters relating to hate speech.

[7]Cis-india.org. 2021. Section 295A of the Indian Penal Code — The Centre for Internet and Society. [online] Available at: <https://cis-india.org/internet-governance/resources/section-295a-indian-penal-code> [Accessed 4 August 2021].