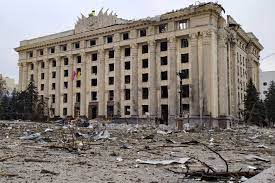 We all are aware about the incidents taking place in Ukraine. The acts of Putin in Ukrainian cities such as Kiev, Kharkiv, Mariupol, Donetsk, has caused immense damage to people and property. People are now compelled to flee from the country which includes Indians as well. The people of Ukraine are paying price of animosity between the animosity between West and Russia. Many people were speculating the commencement of Third World War between NATO Powers and Russia and its allies. As a result, multiple economic sanctions were levied upon Russia in order to choke its economy and to teach them a lesson.

Meanwhile the conflict is taking place, many politicians and statesmen including President of USA, have called Putin a War Criminal.

Also the father of Pulitzer Prize winning journalist, Danish Siddique, who was killed in Afghanistan while reporting in Afghanistan, has approached InternationalCriminal Court regarding all against Taliban regime.

In this article we will understand what is war crime,the trials conducted upon those who committed these crimes during World Wars and what punishment was awarded by the respective courts and Tribunals.

What is a War Crime?

Various statutes have given numerous definitions to war crimes. A simple definitionof war crimes can be given as;

a) Planning, preparing, launching, or fighting an offensive war, or a war in breach of international law conventions, accords, or assurances, or participation in a shared objective or conspiracy to carry out any of the following are all offences against humanity.

b) War crimes are breach of the rules or agreements governing war. Mass killing, ill-treatment, or expulsion to slave labour or for any other reason of civilians in occupied land, murder or suffering of prisoners of war or persons on the international waters, killing of captives, loot and pillage of public or private property, utter destruction of cities, towns, or villages, or carnage not explained by military means are all instances of such violations.

c)Murder, annihilation, servitude, expulsion, and other inhuman treatment against civilian areas committed before or during the war, as well as pogroms on political, racial, or religious grounds in the implementation and operation of or in correlation with any wrongdoing within the Tribunal’s purview, whether or not in infringement of the nation’s domestic legislation.[1]

There were attempts taken after World War I when countries joined together and signed the Treaty of Versailles in 1919 to ensure peace, but they were insufficient to prevent nations from fighting another world war. The world was more evolved at this time, with superior technology and more destructive weapons.

Many people were killed or injured all across the world. Nations have lost soldiers, and civilians have been drawn into the conflict. Rapes and genocide were committed in large numbers all throughout the world. Religions were singled out and slaughtered in the most brutal manner possible[2].

A global conflict could not be prevented or stopped since there were no international laws in effect. The world was not yet a mature society at that period.

The United States deployed nuclear weapons on Japan in order to win the war. This was the most heinous act ever perpetrated against civilians, as well as the consequences of the nuclear attack are still being felt. In 1945, World War II came to a conclusion. Following the war, various nations came together to draught the Geneva Conventions and agreed on its provisions.

Violations of international humanitarian law were dealt with harshly soon after World War II. During WWII, Germany and her allies, particularly Japan, were determined to be liable for significant violations of international humanitarian law. The crimes they committed outraged the international community, and it was decided that the perpetrators of the crimes should be held accountable. On October 30, 1943, the Moscow Declaration was issued in order to prosecute and punish them.

In accordance with the Moscow Declaration, the United States, the United Kingdom, France, and Soviet Russia signed an Agreement for the Prosecution and Punishment of the Major War Criminals of the European Axis on August 8, 1945. An International Military Tribunal was established as part of the Agreement. The provisions relating to the tribunal’s constitution, jurisdiction, and responsibilities were written out in a Charter attached to the 1945 Agreement. The Charter included clauses on the defence of superior orders, individual responsibility regardless of official rank, and the right to a fair trial, among other things.

The tribunal’s jurisdiction was established in Article 6 of the Charter as (i)crimes against peace, (ii) war crimes, and (iii) crimes against humanity[3].

The Charter made it explicit that a defendant’s official position, no matter how high, would not absolve him of culpability or lessen penalty, and that commands from the higher officials would not constitute a defence, but might be used to mitigate punishment. It was also stipulated that the Tribunal would have the authority to declare any group or organization a criminal organization, putting any member of such group on trial before national, military, or occupation courts, which would be unable to challenge the Nuremberg Tribunal’s findings. The Court indicted twenty-two German and Nazi leaders, as well as six organizations. Only two of the latter were acquitted: the Reich Cabinet and the General Staff and High Command. Among the three alleged leaders were arrested. Twelve were sentenced after being acquitted, including one who was tried in absentia. Three were sentenced to death, three to life in prison, and the remaining four were sentenced to death. were sentenced to significant periods of incarceration[4].

During the war, the British tried three Australian army officers for war crimes, and after the war, a Boer accused of misusing a white flag was tried. During World War I, both sides committed violations of the law of war, known as war crimes, and held trials.

The Treaty of Versailles, which concluded World War I, included a provision for Kaiser Wilhelm II of Germany to be tried by an international court “for a supreme violation against international morality and treaty sanctity.” Individuals accused of committing war crimes during the conflicts were also required to surrender to the former Allies for justice under the Treaty. The Allies subsequently decided that such trials should be conducted by the Supreme Court of Leipzig for political reasons. The Allies stopped sending cases to the German court after a dozen cases were tried at the request of Belgium, France, and the United Kingdom, the majority of which resulted in unjustified acquittals or drastically inadequate punishments[5].

Despite the fact that the Versailles Treaty’s provisions were never implemented, their historical relevance in the formation of international law should not be overlooked. It may be argued that the section of the Versailles Treaty dealing with war crimes and their punishment aided in the conversion of certain principles of international morality into legal norms by providing legal punishments for transgressions of moral laws[6].

The Allies formed a tribunal to try the rulers of Japan, an Axis power, during World War II. Japan began a quest to acquire or rule Southeast Asia and the Pacific Ocean in 1931, when its soldiers conquered the Chinese territory of Manchuria. Six years later, Japan invaded China’s Shanghai-Nanjing region and conquered Nanjing. In a terrible campaign of rape, torture, and mass killings, Japanese forces massacred Chinese citizens and prisoners of war. Similar crimes were committed by Japanese soldiers in various parts of China and during their wartime occupation of Manila, Philippines.

Allied leaders decided on a postwar policy for Japan at their penultimate war summit in Potsdam, Germany, in July 1945, and declared their interest in holding the Japanese responsible for war crimes, especially the horrific abuse of allied prisoners of war[7].

International law is nevertheless constrained by international politics, and each is reliant on the other for progress. However, it is critical to understand the distinction between legal and political techniques in international affairs. War avoidance is a political obligation, but violating the peace through aggressive war is a criminal offence.” However, the essential idea of peace is upheld in the Nuremberg judgement: a man who starts or plans to make an aggressive war is a criminal[8].