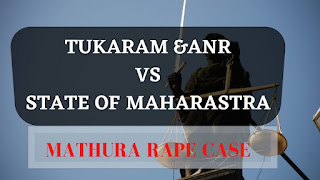 The case named Tukaram & Anr. v State of Maharashtra[1]was a landmark case as far as rape and its laws are concerned. The incident took place in 1972, Chandrapur district of Maharashtra which shook the nation. The decision was given by the Supreme Court was something that caused outrage within the nation. Several protests were organized by many activists such as Vasudha Dhagamwar (who submitted an open letter to the Chief Justice of India about this matter) and Upendra Baxi Raghunath Kelkar Lotika Sarkar)against the decision. Also it led to further introspection and lead to review of rape laws in India and the definition of consent was redefined.

Mathura, a sixteen-year-old girl, who was an orphan who worked as a house help at the Nushi’s place. She was in love with Ashok, Nushi’s nephew. Also she developed sexual relations with him. She wanted to marry him, to which his brother objected. As a consequence of which he filed a kidnapping case against Ashok and Nushsi’s husband. The head Constable Baburao recorded the statement. Ashok as well his family was brought to Police Station. Approximately around 10:30 AM, everyone was heading out of police Stations post recording of their statements.

The accused Ganpat asked Mathura to stay while everyone was leaving the station. The accused turned the lights off, shut the door and allegedly raped her after asking to disrobe herself, thus outraging the modesty. After he was done, another accused Tukaram, who was heavily intoxicated, could not rape, but fondled with her private parts.

Mathura told her family and friends about the incident. Her hymen exhibited previous ruptures, but she had no other injuries on her body, according to the medical examination. She was between the ages of 14 and 16, and her hymen revealed old ruptures.

The Issue before the court was whether there was any activity of rape was committed by the accused?

The case went through the due judicial process. The judgement given by the three courts i.e. sessions court, high court and supreme court. The sessions court went on to give an erroneous decision leading to acquittal of the accused. When the matter reached to Bombay high court, the decision given by sessions court was reversed and the accused were convicted. On further appeal to the apex court the court went on to give absurd decision which led to wide spread protest and eventually lead to necessary amendments in various legislations.

Sessions court acquitting the accused said that the guilty was habituated to sex and her consent was obvious in order to satisfy Ganpat, one of the accused. According to them sexual intercourse did take place but it was not rape.

He referredto medical reports and concluded that there were no body marks on the body of the victim, thus use of any kind of force is automatically ruled out.

Also the medical reports mentioned that the girl is between 14-16 years of age, thus amounting to rape irrespective of consent[2]. But the judge went on to say that the evidence for the same is not sufficient.

Unlike the session’s court, the High Court held the accused guilty for rape. They were of the opinion that what happened over there was a passive submission. And the same cannot be correlated with consent.

Also, the fact that no resistance was shown by the girl cannot be concluded as consent. The policemen were obviously at a superior position, thus showing any kind of resistance to them would have been detrimental for her and her family.

According to the High Court, the girl’s lack of semen on vaginal smears and pubic hair was due to the fact that she was checked twenty hoursafter the incident occurred and that she must have bathed at any point between the incident and the medical check-up.

The policemen were complete strangers to the girl. So it is highly unlikely she was consenting for the act by the policemen.

But High court did admit that the medical evidence produce is ‘weak evidence’ and it cannot be admissible.

In 1979, the supreme Court gave its verdict and they overturned the High Court’s decision. The Apex Court had a similar view with that of Session’s Court. They were of the opinion that this is a case of consensual sex and the girl did consent for the same.

Also they didn’t find any injury marks on the victims’ body, thus there was no resistance from her side.

Aftermath of the Case

a) Medical Test: Medical evidence is admissible in court under Section 45 of the Indian Evidence Act, which allows medical experts’ opinions to be used in judicial procedures. The Supreme Court, however, determined that because this is a sort of ‘opinion evidence,’ it should be considered a ‘poor type of evidence.’ In criminal prosecutions, medical evidence has always been crucial. It tries to prove that either the accused was guilty of rape or that such evidence can be used to prove that the plaintiff’s testimonial was forged, proving that the victim was a bad person[3]. As an outcome, the sentence of the offender is lowered. As a result, the Evidence Act’s provision 155(4)[4]was revoked.

In Pratap Misra v. State of Orissa[5], the victim was referred to as a “concubine” since she was in a relationship with a married man and later wedded him in a bigamous marriage. Three men raped her when she was on a vacation with her husband. The court, however, acquitted all three on the grounds that the victim had no visible injuries and thus must have given her consent. Furthermore, throughout intercourse, she had just wept rather than yelled.The victim of gang rape miscarried after a few days, and the court stated that if the intercourse had been forced, she would have miscarried immediately rather than after a few days.

b) Testimony of the victim in the court: It is extremely difficult for the victim to establish the absence of consent, particularly in cases of incarcerated rape. The victim bears the burden of proof in proving that she was raped against her will. But then, under the Indian Evidence Act, Section 114A[6]was inserted, which provides that if victim denied the consent in any cases of rape, the court shall presume that she did not consent for the same and the burden of proof of will shift to the defendant[7].

The Supreme Court ignored the precedent set by Justice Krishna Iyer in Nandini Satpathy[8], in which he criticised the practise of summoning ladies to the police station and declared it a serious breach of Section 160(1)[9] of the CrPC.

Despite the fact that India’s rape laws have been revised over time, the number of rape cases continues to rise year after year. This act not only causes significant bodily harm to the victim, but it also has catastrophic psychological consequences such as PTSD, depression, flashbacks, sleep difficulties, and more. Improving the protection and security of women in the state would be one step toward eliminating this crime. More than strict rules to punish wrongdoers, men’s attitudes and mentalities, such as those of the Supreme Court Judges in the Mathura Rape Case, need to be changed.