There are numerous numbers of Laws and Regulations that we have to follow. India has the longest written constitution. Each and every law has its own relevancy and importance. The laws established to stop the citizens of the respective country from doing strange things but some time the laws are inherently strange. In this blog you are going to get through some of the strangest laws in the country and across the world, which will blow up your mind. 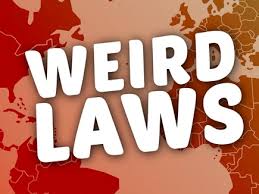 Some of the unusual laws are following:

· YOU NEED TO HAVE GOOD TEETH TO BECOME MOTOR VEHICLE INSPECTOR

For becoming an assistant motor vehicle in the Andhra Pradesh Transport subordinate service, the candidates have to brush their teeth daily twice a day for preventing tooth decay. If an inspector doesn’t brush their teeth daily the consequences can lead to the disqualification of the job. Hyderabad notification Number 21.2012 States; that colour blindness, broken limb, sick condition of an eye, and decay tooth can make you incompetent for the job.

· THE PENALTY OF THE THIRD CHILD

The law reform commission of Kerala recommended the penalty of rupees 10,000. Additionally, removal of the free education, scholarship and the healthcare facilities to the child and the couple who give the birth to the child.

· OBSCENITY: A LEGAL PROVISION IN INDIA

Obscenity is the word, art or the language that offends morality of the time. It has derived from the Latin word of “obscaenus” that means disgusting and body-ill. If we scrutinize it into legal term it partially meant offence graphics content that includes sensual activity. Section 294 of Indian penal code, stops and punishes the people for doing obscenity action before public. Section 67 of Information and Technology Act bans and punishes obscenity in electronic form. Indecent representation of women prohibition act 1986 deals with prohibition of acts related to obscenity. But strangely every action has its own definition about the word obscene but it is not specifically defined anywhere like what does it literally mean.

Only the men get punishment for adultery. However, adultery is illegal. Does it sound like India being feminist or it’s just a law? The law is slightly bent towards women’s side. This is extremely weird that as per this law only man is punished for adultery. Section 497 defines adultery; it says that the men having sexual intercourse with a lady who is married without her husband’s consent will be liable for adultery. The men can be put into the jail as a punishment but the woman herself is not anywhere accountable and liable. This is a gender-bias law which does not make sense in many ways in existing society.

Section 377 of Indian Penal Code was introduced in 1861 during the British rule. Section 377 states that the sex between the homosexual and other sexual activities are termed against the nature or it is unlawful. Isn’t it weird, like seriously! In 21 century and at this age, how can the Government and different laws can tag attraction and sexual activities between the same sex is unnatural or illegal. Everybody should have their own choices and preferences as India is called democratic and this law contradicts the majority rule.

The Treasure trove act (the unlucky lottery) the Act was enacted in 1878. It states that whosoever at any time, find treasure which has more than ten rupees value; he or she has to straight away inform this to the authorized authorities. Failing to this might result in prosecution against the finder of the Treasure.

Internet censorship is the act which; restrict some information to be publicized but, it can be viewed personally on internet. Many organisation and government commonly use this for blocking the access to the copyright information as well as, the sensitive content in the internet. This act states, that the pornography is unlawful under the information technology act 2000. Nonetheless it is allowed or you can access the sexual videos. privately.

India is a democratic state but many laws undermine the fundamental rights of an individual. The law explains that the suicide is an offence but it is not possible to punish an individual who got successful in committing. This statement concludes that the successful suicide is kind a legal but if an individual fail to do so, he/she can be land up in the jail. The fact is based on that if someone dies the reason dies with him/her but, if dies he/she have to be accountable to the authorities for the step taken.

· PROSTITUTION IS LEGAL, BUT OTHER ACTIVITIES RELATED TO IT ARE ILLEGAL!

STRANGE LAWS ACROSS THE WORLD.

· KEEP THE CHICKEN UNDER CARE!

If you own chickens in, Georgia it is totally unlawful to let them out on the road. The law simply states; that if any individual owns any chicken owner has to keep them under control. In other words, he or she have to look after it to ensure the safety of the chicken.

Milan in the Italy states force the people to smile, except in funerals. This is the weirdest law, that prescribes the citizens of the state to smile except in the condition of ill-health and funerals.

· DON’T LET THE DONKEY SLEEP IN THE BATH TUB!!

· CAN’T DENY TO LET USE THE TOILET.

In Scotland, if anyone knocks your door and ask to use the toilet you have to let him/her in. Yes! you have read it right if you denied to let use your toilet, to anyone, it would be unlawful.

It is unlawful to forget your wife’s birthday in Samoa. Interesting know!!! It made my day so funny after I read this. The punishment of this is unclear but aside to this, the husband have to compensate to her, primarily.

· BAN ON KISSING INSIDE THE CAR.

Lovers are banned from kissing inside the car, in Eboli.

In 1992 the chewing gum were banned in Singapore. If somebody eat chewing gum he or she will be charged. It is believed that it will be Deteriorating the environment and health. In fact no gums are sold in the Singapore.

1 thought on “Strange Laws In India”