Social media which was formulated to connect people is now one of the reasons tearing people apart from inside as well as outside. Social Media has impacted the perception of the world and has acted as a double-edged sword. On one hand, it has helped in connecting people and giving the like-minded a place to interact and on the other hand, it has had several pitfalls such as the dissemination of fake news, hate speeches, inculcation of severe mental health issues, and many other issues 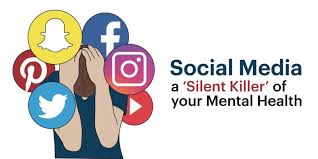 It has been observed that the number of social media users has increased in India since the first lockdown due to COVID-19. Similarly, the number of users worldwide has also increased due to the pandemic. Even the existing user’s time spent on social media has increased due to a break from the hectic schedule. This has led to an increase in the mental health issues that one goes through due to comparison and other factors.

These social media sites such as Facebook, Instagram, Snapchat, Whatsapp, Twitter, etc. were initially created to enhance human communication, but as technology has been advancing the same has started raising objections to the ethical and moral concerns of such media. Moreover, though the online presence and communication of an individual might have increased the time spent with family and other people has decreased, thus hampering the development of an individual and the interpersonal relationships as well. It has started causing mental trauma not only among teenagers but also amongst adults.

The ones born before the advent of social media had enough time to develop these interpersonal skills, but for the present generation, their social presence is more important than these interpersonal relations, thus affecting the way one looks at the world. This also leads to a comparison of each aspect of life and thus disturbs the family time as well. Such a disturbance further leads to symptoms of depression, anxiety, and various other mental health issues that have to be addressed before they fully develop and take over an individual’s life.

The constant use of filters in photos has proved to affect the self-esteem of an individual. It makes a path for the insecurities in one’s life and keeps on digging it. The superficial comparison is yet another way that highly affects an individual’s self-esteem and starts creating self-doubt. “When we derive a sense of worth based on how we are doing relative to others, we place our happiness in a variable that is completely beyond our control”[i].

Social comparison fundamentally affects the well-being of an individual. The key to happiness is to focus on yourself rather than comparing yourself with others. Relativity triggers low self-esteem in an individual which further affects confidence. Thus to stay happy and to avoid such situations one should focus on what he/she has rather than focusing upon relative happiness.

Cyberbullying and online abuse exist in various forms from sharing malicious content to leaking information, sending illicit photos, etc. The cases of cyberbullying have also been increasing with the increase in the use of such platforms. There is a “cogent relationship between cyberbullying and negative adolescent health outcomes”[ii]. The same has a huge impact on the mental health of an individual due to the fear of the public.

In India, around 8 out of 10 teens have suffered from some kind of online harassment. Though Section 66 and 67 of the Information Technology Act, 2000[iii], Section 292A, 354D and 509 of the Indian Penal Code, 1860[iv] and the Protection of Children from Sexual Offences Act, 2012[v] provides certain remedies against cyberbullying, there is no specific act solely focusing upon it. This points out the lack of modern legislation in the country.
Moreover, schools should teach children how to tackle the problem of cyberbullying rather than running away from the same. Laws should be informed to the students and help should be provided to them to ensure justice. Further, the evidence should not be deleted since it would substantiate the claim in the court of law. Cyberbullying is a serious threat and that can have a severe impact on the mental health of a child compelling them to take adverse steps such as committing suicide.[vi]

THE OUTCOMES- DEPRESSION, AND ANXIETY

Due to the increasing technological advancements, there is an urgent need to regulate the content available on social media which may cause a severe impact on the way an individual sees the world. The same must be done without impacting the Right to freedom of speech which has been enshrined under the constitution of India. Social media regulation would help in curbing the dissemination of fake news and hate speeches, thus removing polarisation.

Mental Health is yet another aspect that has to be included within the insurance due to the increasing concerns of the same. The pandemic has affected the mental health of a lot of people due to isolation and the same has to be considered while making policies. Social media is going to be the future of a lot of crimes and hence regulation of the same is the need of the hour. Without regulating the same the mental health-related issues would just keep increasing soon.

While the positive impact of social media has been life-changing, the negative impact of the same cannot be ignored. Mental health is of utmost importance and social media has left no stone unturned in effecting the same. Therefore, rules and regulations have to be made to control social media so that the negative impact of the same can be curbed. There should even be a stricter implementation of the existing laws under the IT Act, IPC, and POCSO act. The use of social media should further be restricted by family members to ensure the healthy development of the child. Thus, the genie which has been let out of the bottle has to be controlled before it takes over the world.