We are living in times where natural resources are scarce, and regardless of its impact on our future we continue to abuse Mother Earth ruthlessly for our greed and desire. Today’s story is about the beautiful forests of Hasdeo Arand located in Chattisgarh and Dehing Patkai situated in Assam. 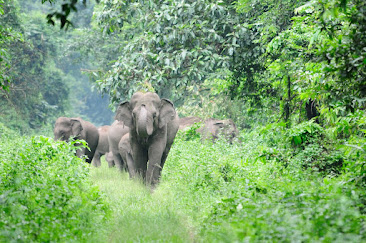 Hasdeo Arand is a dense forest, with luscious flora and fauna. It is located in Chattisgarh, spread over an area 170,000 hectares. It is the home to the Gonds, one of the ancient tribes of India. It has rich coal reserves and since 2011, the people of this region are fighting to save their homes and their livelihood. The images of the lush dense forest transforming into a mining land is overwhelming. In the year 2009, it was declared as the “no go” mining zone by the Forest Advisory Committee (FAC). However, in 2011 the permission for stage-I of the mining was given by the Ministry of Environment not heeding to the FAC. Later in 2012, permission for stage-II was given. On June 24, 2014 National Green Tribunal gave a judgement against mining and in protection of the flora and fauna. Due to the delay and abuse of legal procedure this forest is now under the risk of losing vast areas of forest cover. In the year 2018, it was observed the mining activities continued and it is expected that the number of mines are yet to increase. The result of mining will have a deep ecological impact.

Hasdeo Arand is an elephant corridor and uprooting and clearing the forest would result in increased conflicts between humans and animals, we are now at stage where we have to forcefully and ruthlessly take the homes of these animals. Also the waste generated is now being dumped to the water bodies making it unfit to consume and can be the source of various diseases. The destruction due to mining has resulted in large scale displacement and loss of livelihood of the tribal community. Over the years the poor have been misused and taken advantage, just as the saying goes “the rich are becoming richer and the poor have become poorer”. It is indeed sad that the land they worship and solely depend on slip away from their grasp. They are promised compensation for relocation and displacement but it does not always reach the necessary people. In June 2020, about 41 coal mines were put for auction to boost the economy by the way of sales. This was India’s first ever coal auction set forth by the Union Coal Ministry. The areas include the dense forest of Hasdeo Arand. The elected Sarpanchs of these areas have expressed their concerns and have written a letter to the Prime Minister, ironically the focus is to make India self sufficient but the communities who solely depend on this forest are going to be stripped of their livelihood.

The Dehing Patkai Wildlife Sanctuary located in Assam also referred to as the “Amazon of the East”. It is home to many species such as Asian elephant, Barking Deer, Tailed Macaque, a hundred varieties of orchids, etc. In April 2020, the National-Eastern Coalfields (NECF) was granted permission by the National Board for Wildlife (NBML) for the utilization of 98.59 hectares of land that is a part of this wildlife sanctuary. However, these lands include areas that they have been illegally mining for years. A penalty was imposed on Coal India Ltd (CIL) by the Assam forest department for carrying out illegal mining in these forests. This exploitation has severely impacted several indigenous communities.

The Gauhati High Court has taken up suo moto case and issued notices to the stakeholders after hearing two PILs. The major focus of the PILs is its ecological significance pertaining to the home of various flora and fauna and unique species present. It also stated that it was a violation of Article 21 of the constitution i.e. Right to life. Along with that various provisions of Forest (Conservation) Act 1980, Coal Mines Act (Special Provisions) 2015, National Wildlife Actions Plan (2002-2016) and Centrally Sponsored Scheme, 2009,Biological Diversity Act 2002 and Wildlife Protection Act 1972, and Assam Wildlife Protection Act has been violated. Many communities have been affected by these mining operations. Human rights of these communities must be protected from being abused by mining companies and firms in accordance with the standards of international law. The Guhati HC will proceed further depending upon the reports filed by the inquiry commission. These forests are rich biodiversity and resources that must be protected in order to ensure sustainability.

Issues related to mining have existed for very long time. It has played a major role in socio political, environmental issues, and has contributed to the hardships of these communities residing and depending on these forests. Stricter rules and regulations are much needed at times like these. A check must be put on illegal mining and exploitation of natural resources. The rights of these indigenous communities must be protected, they should be provided with safe environment and elimination of middlemen will ensure that the compensation is received to the deserving.

It is time we take a certain action as the citizens of this country, let us raise our voices to protect the homes of these indigenous species and the save the livelihood of those that are dependent on these forest. Nature was worshipped at one point of time now it is seen as a commodity that is worth buying and exploiting. These forests should be preserved and protected as they influence the weather, climate, and various other factors. Cutting these forest down will have greater repercussions on the ecology, and we will feel the impact of it stronger and harder only then to regret the decisions. It is better now than never, change can be small, but it can create a large impact.