Questions on the Right to Protest

The first question which comes into the picture when the topic ‘Right to Protest’ is introduced is- Do the protestors face the risk of legal action and police action? The second question is to find out that in case the protestors face any kind of legal or police action then what protection do they seek from the law? Thirdly, are the ongoing protests a threat to the country’s democracy? Lastly, does the government actually listen to the demands of protestors? 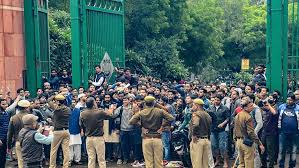 The term protest here means to make a strong objection. The right to protest though not separately mentioned as a fundamental right under our Indian Constitution but it is protected, guaranteed, and assured under certain provisions laid down.

In India, ongoing dissents, protests, and movements are usual here and without which India would not have been a free country. Ever since the British rule, the general public of India has been revolting against any wrong done towards them. In our country protests, movements, revolts, etc. can be dated back to events like the Quit India Movement, Swadesi, Satyagraha, etc.

In December 2019, there were protests all over the country relating to the Citizenship Amendment Act. Similarly, this year which is 2020, farmers in huge numbers are protesting in Punjab and Delhi against the Farms bills passed by the Indian Government.

Importance of the Right to Protest

The most important aspect of a democratic country is its people and their say in matters of national importance. About 70 years ago, the British system ruled India, and Indian citizens were deprived of all their rights. Thus, after India was independent, fundamental rights were given to all the people of our country so that they can stand for what is correct, and raise their voices for fulfilling their demands.

The major question is why is the right to protest essential and of utmost importance. The response to that is our government brings in new policies from time to time to develop our country and help it reach greater heights. The policies which are formulated by the government authorities are monitored, analyzed, and loopholes are recognized by the general public. Thus, the shortcomings and loopholes in government policies are addressed by the general public via peaceful demonstrations and peaceful protests.

Here, the main focus is on the term ‘peaceful’ which means that any protest or demonstration is lawful only when it is peaceful in its essence. But, if the motive of any demonstration or protest is to bring an outrage i.e., to disturb the regular working or functioning of others, then such activities will not be termed lawful.

In India, even after independence, there were numerous famous protests and movements. The very first one was just after independence in 1952, Andhra Movement took place which was headed by Potti Sriramulu. In this movement, a new state was demanded by Telugu speaking people which resulted in the formation of the state of Andhra Pradesh. In the year 2011, Anna Hazare’s famous anti-corruption movement. In the year 2012, after the famous Delhi Nirbhaya gang-rapes started the Nirbhaya movement to ensure women’s safety. Likewise, in every democracy citizens are given certain rights so that they can raise their voices against any unjust done towards them and demand the government for the same.

How is the Right to Protest a Fundamental Right?

All the citizens of our country enjoy the right to protest so that they can inform the government about their demands and raise their voices against any unjust.
Although the fundamental rights given to the Indian citizens do not mention the usage of the word ‘protest’ even once. But, Article 19 of the Constitution of India, 1949 strongly protects the right to protest of the Indian citizens.

These three articles together provide Indian citizens the right to peaceful protest. Therefore, in any democracy free speech and the rights of peaceful protests are protected, encouraged, and respected. But these rights are not of absolute nature and Article 19 of the Indian Constitution also contains the restrictions that can be imposed on the protestors. For instance, if any protest is against the country’s sovereignty, integrity, security, and friendly relations with other states then such protests can be restricted.

Hence, the citizens of India do enjoy their right to protest but at the same time administration does have the power to restrict such protests.

Power of the administration to restrict protests

The administration has the authority and power to restrict the movements or protests which are against the country’s sovereignty, integrity, security, and friendly relations with other states. As a result of restricting the protestors, the protestors sometimes have to bear excessive force from the authorities such as police brutality, excessive force, or usage of strict laws which result in arbitrary detention- Unlawful Activities Prevention Act (UAPA), Sedition Laws, National Securities Act (NSA), etc. Due to such conditions in the last few years, approximately 1000-5000 people have been detained or arrested and more than 30 people died. On account of the happening of such events, the ranking of India in Human Rights Standard has taken a huge downfall.

Amit Sahni vs. Commissioner of Police (CAA Protests Shaheen Bagh)
This case relates to the ongoing protests in Shaheen Bagh against the Citizenship Amendment Act. In this case, the Supreme Court held that the protestors do not have any right to occupy any public place for an indefinite period. Due to the ongoing protests, the roads were blocked and the general public faced a lot of problems and led to chaos. Thus, the administration has the right to clear the obstructions or the area. In this case, the Supreme Court also referred to the judgement of Mazdoor Kisan Shakti Sangathan vs. Union of India and Another, where there were protests in the Jantar Mantar of Delhi due to which the local residents faced a lot of trouble. Thus, in both the cases of Shaheen Bagha and Jantar Mantar, to maintain a balance between the local residents right to commute and protestors right to hold a demonstration, the Supreme Court directed the Police to use proper mechanism and allot a limited area to the protestors for peaceful protest and make clear guidelines in this matter too.

Ramlila Maidan Incident vs. Home Secretary, Union of India and others (2012)
In this case, in the year 2011, Baba Ramdev took permission to put a yoga camp at the Ramlila Maidan. In this camp, thousands of people arrived but they all started a protest against black money. Numerous negotiations took place to put an end to these protests but the protests continued. Thereafter, Section 144 was imposed, and immediately police raided the Ramlila Maidan and used excessive force to drag out the sleeping protestors at the Ramlila Maidan in the night. The Supreme Court held that the citizens have a fundamental right to assembly and peacefully protest which cannot be taken away by an arbitrary executive or legislative action and the action taken by police officials was incorrect.

Hence, Recently the newspapers and news channels are flooded with the news of farmers protesting against the Farmers bill 2020 and marching towards the capital city from various places in Punjab and Haryana. Looking at the Constitutional provisions, Article 19(1)(a) states that freedom of speech and expression is guaranteed to every citizen, and Article 19(1)(b) assures citizens with the right to assemble peacefully and without arms.