Marriage is a wedlock wherein two different sexes get married and is culturally recognized as a union. Marriage gives rise to a very tender but complex interrelationship between the spouses from which a plethora of rights and obligations emanates.[i] It is very important institution because the families in the society are formed through it only. 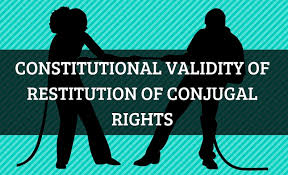 Section 9 of HMA states provisions regarding restitution of Conjugal rights. Restitution means restore and conjugal rights means right of married couple to stay together. The rights and obligations which arise between a husband and wife due to a marriage and it form the essence of the matrimonial alliance. The basic rule of a marriage is that either spouse deserves the consortium of the other spouse. Consortium means the comfort and the company of the other spouse and includes confidence, enjoyment of association, comfort of dwelling together, intimacies of the domestic relation, etc. According to section 9, if either of the husband or wife withdraws from the society without any reasonable excuse then the aggrieved party can file a petition in the district court for restitution of conjugal rights. And if the court is satisfied with statement mentioned in the petition and thinks that there is no such legal ground through which the application should not be granted may decree the restitution of the conjugal rights accordingly.

Issue which arises in context to section 9 is that whether the job of wife not being at her husband’s place amounts to desertion. And if it is so then her withdrawal from the society without giving any reasonable excuse will entitle the husband to sue his wife for restitution of conjugal rights. In the case Tirath Kaur v. Kartar Singh[ii] it was held that husband can content himself by visiting his wife whenever he feels like. Whenever the husband wishes to live or cohabit with his wife then he can live with her or she can go to him occasionally for living. But the thing is that there must be a mutual consent of the parties.

This is the fact that constitutional validity of section 9 was a topic of debate from the year 1983- 1984. Some had the viewpoint that restitution is an uncivilized, barbarous, etc. whereas some did not. In the case T Sareetha v. T Venkatta Subbaiah[iii] Justice P. Chaudhary of the AP High Court held that restitution is uncivilized, vulgar, uncouth, engine of oppression and barbarous and section 9 is violative of the fundamental rights i.e. article 14, 19 and 21 of Indian Constitution. He held that the remedy which was provided by Section 9 was savage and barbarous which violated not only the right to privacy but also the human dignity under Article 21 and as Section 9 violated the fundamental rights guaranteed by the Constitution under Part III it requires to be void under Article 13 of the Constitution. Section 9 denied a woman her. free choice of her body and served no public purpose and thus should be held void.

In the case, Harvinder Kaur v. Harmendra Singh Choudhary[iv], Justice A.B. Rohtagi of Delhi High Court held that, the view of the Andhra Pradesh High Court was too narrow as it didn’t take into account the provision of Section 13 of the Act.[v] He held Section 9 to be valid and constitutional. He reasoned it by stating that Section 9 preserved marriages as sexual intercourse was only an element and not the summum bonum of a marriage. The remedy provided by Section 9 only aimed at consortium and cohabitation and not just sexual intercourse. It would be a fallacy to hold restitution of conjugal rights as government’s invasion into marital privacy.

In the case, Saroj Rani v. Sudarshan Kumar Chadha[vi], which was presented with the constitutional validity of Section 9 upheld the view of the Delhi High Court and held that, conjugal rights is not a mere creation of a statute but the right of a husband or wife to the society of each other. If this essence was not protected then it would lead to the irretrievable breakdown of the marriage. Order 21 Rule 32 attaches the property of the respondent spouse if he/she wilfully disobeys the decree and provided he/she owns a property. This does serve a social purpose and is also an aid to prevent the break-down of a marriage, rejecting the position held by the Single Judge of the AP High Court.

In the case Kharak Singh vs. State of Uttar Pradesh[vii], it has observed and states that right to privacy does not exclude the protection of intimacy. The Bombay High Court however disagreed with the decision and, said that a wife can’t be forced to live with her hus band against her will, this decision was also upheld in the case Bai Jiva vs. Narsing Lalbhai[viii][ix]

The author believes that for everything there are few exceptions. The same way restitution of conjugal rights is only applicable and works out in some exceptional cases. If there are fights and quarrels among the partners then though for that time being it may help them if they opt to stay away from each other. But after some time it will bring distance between the partners and then ends their marriage. Hence, according to the author this concept does not help in most of the cases. The author feels that the concept of restitution of conjugal rights are infringing the principle of natural law as it does not support the justice and fairness ground.