Many of us have seen China seeking to dominate the World economies with its enormous investments in various countries/businesses/economies. Recently accusation has been raised against China for not sharing the information regarding the spread of COVID-19 (the novel coronavirus SARS-CoV-2) In this epidemic more innocent civilians were killed than died in a series of wars. It takes years to restore economies, and the social and psychological effects can never be overlooked or accepted. In addition to the economic harm done by the coronavirus, the mortality and suffering done to the inhabitants of the planet cannot go unresolved. 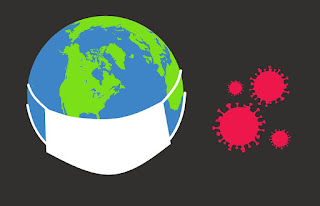 In 2002, the Guangdong province of China spread the SARS outbreak and by 2003 infected 29 country-states. Seven hundred seventy-four people were affected by the epidemic. The World understood that this cost of innocent lives could have been saved if China had not for several weeks, censored important information on public health and safety. This unfortunate incident resulted in the implementation of the International Health Regulations (I.H.R.) by the World Health Organization (WHO) and its constituent nations in 2005. Allegations were raised against China to have consciously refused to abide by the I.H.R. guidelines in attempting to stop this novel coronavirus from spreading.

In November 2019, Wuhan was the site of the outbreak of the currently identified Covid-19 virus in the Hubei province of China. The national government of China has managed to patch up the details of the epidemic by targeting doctors who might advise of a new infection. If China had taken prompt steps to take account of the fact, it would have contained the virus in sooner December 2019 itself. Li Wenliang, an ophthalmologist, revealed the information online on December 30 at Wuhan Central Hospital. While the public health authorities in Wuhan requested details on the spread of ” pneumonia unclear-cause,” Li Wenliang’s warning on the latest disease had been suppressed by Government officials. The Municipal Health Commission of Wuhan misrepresented on December 31 that the COVID-19 is non-transmitted diseases. China delayed until February 14, 2020, to reveal about 1700 positive cases of COVID-19. It is evident that for almost two months, China’s administration withheld and refused crucial public health information.
China’s Liability under International Health Regulations with compliance with WHO’s Constitution

The pandemic does the worldwide harm to individuals, the environment, and culture. The severity of the injury has contributed to allegations that China is liable globally for the disease outbreak. Article 6 of the WHO Constitution refers to Public Health Emergencies of International significance (PHEIC). PHEIC, State shall notify the WHO of all public health facts and activities within its jurisdiction within 24 hours of the evaluation. Article 7 obliges all-party nations to exchange all crisis data with the WHO regularly. After verification, Article 11 requires the WHO to transmit that much information with other nations for implementing reasonable precautions. China has disrupted the transmission of data on the outbreak, and China had also shown sluggish behavior for authorizing the WHO team to investigate the Wuhan circumstance. These activities have made it exceptionally challenging for the World Health Organization (WHO) and foreign governments to strategize effectively for this disastrous outbreak.

Concerning violations of I.H.R. guidelines, that is not an unusual situation. Many treaties had not dealt with the compensation for damages caused by the breach of their provisions. Furthermore, treaties do not address that. Moreover, no government has reported that China has contravened its I.H.R. notification responsibilities. The I.H.R. provides a dispute settlement clause, meaning that a foreign government may bring legal action against China that China has breached the I.H.R. and has a duty, in line with the standards of State liability, to provide reparation for damages incurred by the unlawful act.
Liability arose under Customary International law and why such liability is not able to appear any action.

Customary international law states that a State that violates international law “has a responsibility to adequately pay the damage incurred by an external act that is inappropriate.” Nations have not actively sought penalties against countries accused of refusing to comply with contractual agreements to disclose diseases or to refrain from implementing trade or travel restrictions that have no medical basis. Due to the convergence of political and epidemiological interests, Countries have not been willing to enforce the customary legislation on state responsibility in terms of contagious diseases.
Allegations by Foreign Governments and their Institutions

The U.S President Trump also welcomed China’s reaction to the COVID-19 and even attempted to warn China behind this disease outbreak. U.S President wanted the U.N Security Council Resolution to identify China as the source of the coronavirus.

However, one of the State of U.S. had sue China over economic loss due to COVID-19; however, U.S. courts do not hold any of these civil liability jurisdictions.

Freedom Watch, U.S.A. lodged a lawsuit with the International Criminal Court (I.C.C.) on the development and eventual release of novel coronavirus classified as a biological weapon, against the People’s Republic of China (P.R.C.), the People’s Liberation Army, Wuhan Virology Institute (WIV) and its head, Shi Zhengli, on April 1 under Article 15 of Rome Statute. French President Emmanuel Macron also criticized the way the disease was treated by China, stating that it had naively assumed that the situation was well managed.

Many governments were claiming that China has breached the I.H.R.and has to negotiate reasonably. On the other hand, WHO lauded China’s achievement during the outbreak. The WHO does not determine how state parties view the I.H.R., but the I.H.R. itself grants the WHO such importance and power that no one can overlook its acts in this sense.
China’s liability under ARISWA (Draft Articles on Responsibility of States for Internationally Wrongful Acts)

Article 2 of the ARSIWA (Articles on Responsibilities of States for Internationally Wrongful Act) 2001, defines ‘wrongful acts’ as ‘attributable to the state’ and that ‘constitute a breach of an international obligation.’ After the leakage of the virus, the responsibility got transferred from Wuhan Virology Institute (WIV) to President Xi, and all the local Wuhan authorities and all of the Chinese state bodies are responsible for China’s misconduct.

China also violated Article 14 ARSIWA by failing to adequately disclose relevantly and transparently information with the WHO in compliance with the I.H.R. and by then prolonging its violation over the full duration during which it proceeded and stayed not in full compliance with its international obligations. The State is obliged to repair the damage caused by wrongful acts as per Article 31 to the whole, both materially and morally.
China’s liability under the International Criminal Court

As the Chinese health authorities show the recklessness, China should be held guilty, under Article 7(1) of the I.C.C., of ‘other inhuman acts of a similar nature that cause intentionally serious bodily suffering, or physical injury, or body damage’ under the ‘crimes against humanity’ as mentioned.
China’s liability under the International Court of Justice in compliance with the U.N. charter and WHO constitution

The WHO Constitution provides organizations with an often-overlooked provision that allows disagreements on the implementation of requirements to the I.C.J. The failure of China’s disclosure could probably fail under Articles 22 and 64 of the Constitution, mandating the enforcement of the International Health Regulations and demanding the dissemination of data by government officials. Besides, China’s wilfully incompetence in regulating trade in wildlife implies a violation of the WHO’s ultimate objective, as enshrined in Article 1. Although untested previously, this pathway assures us to invoke I.C.J.’s controversial competence to evaluate Chinese liability. Article 75 states that the International Court of Justice (I.C.J.) shall refer to any dispute regarding the interpretation of the WHO Constitution. If holistically this is read as a whole, it might allow the I.C.J., unless anything, evaluate Chinese liability, omissions, or commissions, to invoke its contentious jurisdiction.

A pandemic of this magnitude has not been encountered and brought before the I.C.J. All of this can be used to make China accountable as a strong analytical and diplomatic pressure tactic. The approval of the disputing parties is not necessary to call on the advisory jurisdiction of the I.C.J. According to Article 96 of the UN Charter, an advisory opinion on any legal matter could be sought in the United Nations General Assembly, the United Nations Security Council or any other U.N. body. However, it does not have binding authority to give an advisory opinion from the I.C.J. It also requires good faith to be enforced.

It is hard to bring a country like China to the I.C.J. or any other international court. China’s submission on the disagreement in compliance with norms to an international forum is extremely rare. China’s reaction was not positive, and World had seen this behavior in the South China Sea Dispute, which brought before the International tribunal. The challenge is even more complicated if the perpetrator-state is stable in terms of military and diplomatic relations. China is a core member of the U.N. Security Council, which is vital to remember, and that shall be permitting China to bring up veto power for its cause. Therefore, collective intervention, including trade sanctions against China by member nations, could be one of the possible ways.
Image Source
Author: Piyush Thanvi, Institute of Law Nirma University, Ahmedabad,