Different colours, different cultures, different traditions and different religions forms the diverse India. With such diversity comes the problem of governance. In the British era, some of the matters such as inheritance, succession, divorce, maintenance and marriage were left untouched to be governed by the English laws. But when India got independence and the debate on Hindu Code Bill got pushed, then the debate on Uniform Civil Code or ‘Saman Nagarika Samhita’ got up-surged. It is based on the idea of “one nation, one law”. Thus, there is a shift observed in the thinking of the administrators of the country where they initially relied on the religious laws to be applied on certain areas but later they admitted the need of uniform civil code in the country. Goa has successfully implemented the Uniform civil code in their state. 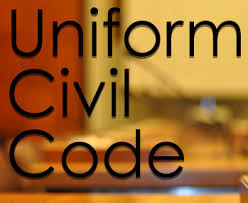 The constitution of India in [i]Article 44 provides the direction to the state to formulate the uniform civil code for the citizens across whole territory of India.
On one hand the [ii]Article 14 provides for the equality before law and equal protection of laws to all persons within the territory of India. Further, the [iii]Article 15 provides that there will be no discrimination on the basis of gender, race, caste etc. Following personal laws of any religion acts as a dent on these fundamental rights.

On othe hand [iv]Article 25 provides the freedom to the citizens to propagate, profess and practice any religion of their choice. But the question arises whether the Uniform civil is the subject falling under religious matters. The question to this question is in negative. The religion is more spiritual and devotional in nature and moreover Uniform civil code has nothing to do with the personal laws.

The uniform civil code is the need of the citizens of India. But it is for sure not the desire of the orthodox religious people.
The Uniform civil code is necessary for the gender justice. The different personal laws based on the ancient time period may be against the concepts of the equality and other fundamental rights. The uniform civil code helps in the elimination of this impediment in the realization of the goal of securing justice to all people. With the advancements in the society there is a requirement to leave the thinking behind the personal laws i.e. of the dominance on women and gender inequality in all terms.

The preamble of the constitution includes the word ‘secular’ which was added by [v]44th Constitutional Amendment Act, 1978 which indicates to the fact that the common law country must have the law which is common to all the citizens without any discrimination between the persons on basis of the religion. The Uniform civil code can help us in achieving this objective.

The judiciary at many times attempted to mend the discrepancies prevailing in the personal laws but the attempts have proved futile at times. For example, In [vi]Mohd Ahmed Khan v. Shah Bano Begum (1985) the supreme court gave a historic judgment to provide the respectful status to the Muslim women in respect of maintenance but the parliament attempted to negate this judgment through the legislation namely Muslim women (Protection of Rights of Divorce) Act, 1986. Thus the attempts of judiciary were suppressed when it tried to move the nation towards the uniform civil code.

In certain cases the Hon’ble court has also issued the directives to the legislature to frame the religion neutral laws.
In [vii]Pannalal Bansilal Pitti & Others, etc. v/s State of Andhra Pradesh & Anr, it was held in this case that the legislature must pass the legislations which apply uniformly to all the religious communities.

The path of implementing the Uniform Civil Code will never be easy. As India is a diverse country and there is sure to be resistance from the orthodox religious people on its implementation. This reminds us of the protests of Hindus against the Hindu Code Bill. No doubt at that time the government had to partially give up their idea of enforcing it as a law due to various political reasons. However, it was finally implemented by splitting it into four different acts. Thus, it shows that such reforms in relation to religious laws may face resistance in India but the strong political will can finally implement it. But this move is still criticized on the basis that it was for only one religious community which facie discriminatory in nature. But as the history can only be written and not mended thus the lessons can be learnt from the past and take actions accordingly.

Recently the government in its statement before the Parliament said that the government is bound to come up with uniform civil code as provided by constitution of India but the matter still requires certain consultations. Further the law minister, Ravi Shankar Prasad, also clarified that the minority status of any community will not be taken. The present government had promised in the manifesto to bring the uniform civil code and the government is showing the intent to do so in the Parliament as well. Moreover this government has abrogated the Article 370 also which shows its political will. Thus, we can expect the implementation of the uniform civil code as the dream which is going to be realized but it is still a dream which is not going to be realized in immediate future as its implementation requires preparation from side of government as well as from the side of the citizens. Thus, whenever it will happen it will be the gradual process only.