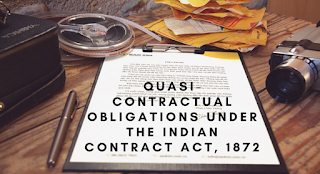 A retroactive agreement between two parties who have no prior responsibilities to each other is known as a quasi-contract. It is made by the judge to fix a situation in which one party benefits at the expense of the other. This agreement is meant to keep one party from taking advantage of the situation at the expense of the other. If the goods or services are accepted but not sought by either party, these contracts can be imposed. Acceptance justifies the payment expectation. A quasi-contract outlines a party’s responsibility to another if the latter owns the original party’s property. These parties are not required to have previously agreed-upon terms. If Person ‘A’ owes something to Person ‘B’ because Person A indirectly or accidentally owes Person ‘B’, the agreement is imposed by law by the judge as a remedy. The contract becomes enforceable if Person ‘A’ decides to keep the thing in question without paying. The contract is legally enforceable because it was reached in court, and neither party needs to consent to it. The goal of quasi-contracts is to produce equitable outcomes in instances when one party has an advantage over the other. The defendant (the party that acquired the property) is obligated to pay the plaintiff, the aggrieved party, a return for the value of the items.[i]

The origins of quasi-contracts can be traced back to the Middle Ages when they were referred to as debt assumptions. During this time, the law compelled the plaintiff to get the amount determined by the court from the defendant, as if the defendant had always agreed to pay the plaintiff for the goods or services.

Courts utilized the Indebitatus assumpsit procedure to order one party to pay the other as though the two parties had signed a contract. The law inferred the defendant’s willingness to be bound by a contract requiring compensation. Such contracts were utilized to enforce reimbursement obligations in the early days of quasi-contracts.[ii]

1.     It’s usually the right to geta remedy, and it’s usually (but not always) a monetary quantity.

2.      Rights are imposed by law rather than resulting from an agreement.

3.     The law does not apply to everyone in the world; rather, it only applies to certain individuals. As a result, it resembles a contractual right.[iii]

When parties are enrichedwithout their consent, yet do not seek redress, this is known as unjust enrichment. Enrichment is a positive aspect of a person’s life. [iv]A physical exertion is an option, but it is not required. Unjust enrichment can occur in a variety of settings. as an example:

·       The painter made the mistake of painting the wrong house. When a profit is made, the resident becomes wealthy. The resident will be unjustly rewarded if he or she decides not to compensate the painter.

·       Professional wedding planners can assist your friends with last-minute nuptials. She has gotten wealthy if her acquaintance accepts this assistance for her benefit. If the acquaintance refuses to pay for the service when it is billed, the acquaintance will be unjustly enriched.

·       A qualified doctor happens to pass by and saves her neighbor’s life by doing emergency surgery. Neighbors’ lives were enriched through emergency surgery. If the doctor then seeks formal invoice service and is not compensated, this is unjust enrichment. No one planned to provide the service in the example case, but it happened and brightened the lives of the receivers.

The Latin word quantum meruit refers to the Indian Contract Act, 1872. It means “what one earns” or “what one deserves.” Simply expressed, it shows the true cost of the product or service given.

Although there is no formal contract, the law does require payment of reasonable compensation for the work and materials delivered.[v]

Various standards must be evaluated or granted by a judge for quasi-contracts.

·       Recipients of unjust enrichment must be aware of their situation and accept the benefits they have received.

·       The uncompensated party must show that there has been undue enrichment.

·       The exchange must be held until payment is received.

If the incapable person doesn’t have any property, then the supplier will not be able to get reimbursement.

Reimbursements are permitted under Section 68 if the following conditions are met:

·       The items which have been supplied must be the condition in life or essential for survival.

·       People to whom necessaries have been supplied musthave impairments and be incapable of acquiring such necessities. Incompetency to the contract has been defined in section 11 of the Indian Contract Act.

Not only the supplies should be necessary, but also, they must be important to support people in their living environments. It also relies on the person’s condition and needs at the time when the goods in the name of necessaries are delivered.

Example: A person has supplied necessaries to an orphaned child such as shelter, food, clothing, etc, and also beard all the expenses for his education. Then, he can demand reimbursements from the property of the minor (if any).[vi]

Those who want to pay money that others are legally obligated to pay and do so are entitled to recompense from others.

B, for example, rents Bengal land from A, the Zamindar. The income that A owes to the government is past due. As a result, the government put the land up for sale under tax legislation, resulting in the termination of B’s lease. B pays the money that A should pay to the state to avert the sale. The amount paid to B must be refunded by A.

·       The plaintiffs are willing to pay. He doesn’t require formal ownership of the land in exchange for payment. It is, nevertheless, frequently used to determine whether a plaintiff is interested.

·       Section 69 prohibits the court from restricting that a person who is uninterested in property may be interested in paying for it.

·       Defendants should not be forced to pay. He should only be concerned with making payments to safeguard his interests.

·       The defendants must be legally bound to make restitution.

·       Instead of paying himself, the plaintiff should have paid someone else.

Example: Whenever some person donates anything to the poor, he has no intention of doing this with charge. Hence, this act will be said to be done gratuitously and he cannot demand any compensation for the same. But, whenever supplies have been given non-gratuitously and the supply was lawful, one can get the compensation.

The following three elements must be completed before asserting the right to a proceeding under Section 70.

2.     The act should not have been done gratuitously by the person.

3.     Those who act must have reaped the benefits.

SECTION 71- RESPONSIBILITIES OF THE ITEM FINDER

When it comes to locating and managinglost assets that belong to others, the following criteria should be observed.

2.      There is no legal right to deliver the object that has been already located.

3.     Ensure that the item is returned to its rightful owner.

For example, Karthik owns and operates anelectronic shop. Ankita went to buy a laptop from him, but she left her wallet at the store. Unfortunately, Karthik is unable to authenticate her identity using the documents in her suitcase. Karthik places her wallet on the cash register and waits for her to return. Karthik clerk Ajay discovers a wallet on the counter and places it in the closet without informing Karthik. He completes his duties and returns home. When Karthik arrives, he is unable to locate Ankita’s wallet. He is responsible for damages because he did not treat the wallet with the care that a reasonable person would.[viii]

When someone receives something as a result of “extortion,” they must repay it.

For example, Navrana and Rajkumar, share an apartment and split rent payments in half. Navrana has paid the landlord again, even though Rajkumar has already paid the full amount of the rent. The landlord is liable for restoring the money provided by the renter in this situation.[ix]

THE DIFFERENCEBETWEEN A CONTRACT AND A QUASI-CONTRACT IS AS FOLLOWS:

The quasi-contract concept is frequently overlooked, yet it nevertheless holds a significant position because it is founded on the values of justice and impartiality. Even though in Indian contract law, quasi-contracts have a new name, however, the principle’s basic character and substance have not changed significantly. Quantum revenue is a concept used in the context of quasi-contracts. This determines the extent of the plaintiff’s pain. If someone breaks the contract on purpose, the chances of the quasi-contract being used are slim. If the employee intentionally violates the contract, however, this form of penalty is frequently less severe. The quasi-contract is an important aspect of contract law, and the aggrieved will get compensation if someone is unjustly benefited as a result of it.

This blog is authored by JAY KUMAR GUPTA, a student of School of Law, NMIMS Bangalore, currently in the first-year pursuing BBA LL.B.(Hons.)