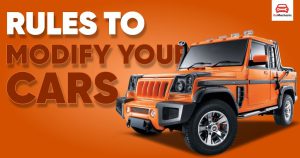 It is difficult to travel a day without seeing at least one vehicle that has undergone modifications from the automotive aftermarket sector because automobile modifications have become such an intrinsic part of car culture. However, the mere fact that modifications are common does not imply that all of them are within the bounds of the law. Over the course of its history, the aftermarket business has developed a reputation for making changes that violate several state and central government regulations. This article seeks to make a comparative review of the status of modification laws, both in India and the USA.

The automobile modification Industry in India is estimated to be worth about 50 crores ( 500 Million in rupees), and it is seeing strong year-on-year development, with the exception of the last year. The cost of modifications may range anywhere from a few lakhs to a few crores, depending on the nature of the work being performed.

The Automotive Research Association of India in Pune, the Vehicle Research and development establishment in Ahmednagar, and the Indian Institute of planning and management in Dehradun are the three testing centers that are permitted to evaluate modified automobiles in accordance with the norms established by the government. However, the government must take into consideration the possibility of making these inspections accessible on a local level. In order to carry out these kinds of certifications, however, the municipal and regional transport agencies need to enhance their infrastructure.

According to Section 100 of the Central Motor Vehicles Act (CMVA) of 1988, the minimum visibility through the glass of the windshield and rear windows of all automobiles in India shall be at least 70 percent. Additionally, when operating a car, the owner is required to have auto insurance in accordance with the Motor Vehicle Act. Further, the side windows of automobiles are required to have a minimum visibility of fifty percent. This is a legal requirement under the statute, and it is a different issue altogether that this rule (among others) is being flouted.

This is one of the most typical illegal modifications that individuals make to their vehicles, and a lot of car-owners do it, regardless of whether they have any other modifications. Hence, where it is against the law in India to install tint film on the window panes of your vehicle if it limits visibility by more than 50 percent; the exceptions to this rule are only made for VIPs and VVIPs. According to the most recent legislation on this matter, the owner of a car is not even allowed to use sunshades on the window panes of their vehicle.

However, in the USA, tinted windows may be beneficial during periods when the sun is very intense; however, tinting on the rear and side windows may, in many instances, be so dark that it creates a safety hazard. This is especially true during times of snowstorms, when the driver’s visibility has already decreased.

When it comes to how much tinting may be done to the side and rear windows of a vehicle, the laws in each state are different and have various restrictions. However, it appears that these restrictions are based on a rational nexusbetween the permitted level of  tinting and the weather conditions of the state in question. Should they be judged to be too dim, the driver runs the risk of being pulled over by the police in your community. For example, window tinting in Alaska must allow for a minimum of 70 percent light transmission through the front side windows and a minimum of 40 percent transmission through the rear side windows.

To improve the overall appearance of their vehicle, many individuals choose to replace the tyres and lights on their vehicle. However, in order to do so, the automobile owner must first have a solid understanding of the relevant traffic rules and regulations. A car’s tyres may be replaced in accordance with the regulations of the CMVA; however, the size of the replacements must fall within the allowable range for the particular category.

For instance, if one drives a vehicle that falls somewhere in the middle of the price spectrum, you have the option of purchasing tyres that are designed for more expensive iterations of the same make and model of automobile. In a similar vein, you are able to modify a car’s headlights and taillights; however, you are not permitted to break the limits placed on color variations. The headlight of your vehicle may be upgraded from halogen lights to white LED lights, but you are not able to choose among red, green, or blue lights as an alternative.

However, in the USA, modifying a vehicle’s lights is arguably the alteration that is done on a car the most often and treated with the most leniency. In these jurisdictions, it is previously established that using lightbars on frequented roads and highways is against the law, but fortunately, lightbars are lawful to use in locations with less people and in the realm of off-roading. Regrettably, the use of red, white, and blue lights, sometimes known more colloquially as “police lights,” is prohibited. If a person is found driving an unmarked vehicle while employing police lights, they could expect to pay a hefty fine and it is likely that more severe cases of usage could invite prison sentences.

Light Bars in particular are renowned for their ability to provide an exceptionally strong and brilliant light. That is good news for drivers if they are off-road or in dark areas without traffic; however, if they use light bars on populated roads and highways, they are inviting danger for others and trouble from law enforcement authorities.

Earlier, a division bench of the Kerala High court said that the structural modifications made to motor vehicles are acceptable according to the provision of the Kerala motor vehicles rules of 1989. These regulations were established in Kerala. As a result, Kerala is home to a large number of customized automobiles, and the number of people who like these kinds of vehicles is quite high even now.

The verdict of the Supreme Court, which overturns the judgment of the Kerala High Court, was specific in some instances, yet unclear in others. After careful consideration, the court came to the conclusion that the Division Bench of the High Court of Kerala in the decision at issue failed to give effect to the requirements contained in Section 52(1) and instead placed emphasis primarily on the Rules. This ruling was handed down by a bench consisting of Justices Arun Mishra and Vineet Saran of the Supreme Court of India.

As a result, the judgment that was handed down by the Division Bench cannot be considered to be one that appropriately lays out the law. The Act’s requirements take precedence over the Rules, and the information included in a certificate of registration may also be altered, with the exception of any entries that were included there in accordance with the specifications that were first drafted by the manufacturer. Circular No. 7/2006 should also be viewed with this frame of reference in mind.

Rulings on modification in the USA:

On the other hand, 2021, recently saw an inadvertent ban on vehicle modifications. In the case brought by the United States Environmental Protection Agency (EPA) against Gear Box Z. Inc (GBZ), The United States District Court for the District of Arizona, although accepting the basic problem that was highlighted by SEMA, chose not to make a judgment on the matter. The Environmental Protection Agency (EPA) made statements in its court filings while pursuing GBZ for allegations of tampering that the Clean Air Act (CAA) does not allow a motor vehicle to be converted into a racing vehicle used solely for competition and that the equipment installed to make the conversion is illegal.

These statements were made while the EPA was pursuing GBZ for allegations of tampering. This apparently incorrect reading of the CAA was first stated by the EPA in 2015, and it is now being repeated in the court file. SEMA contested this interpretation.

The court decided that the EPA had presented proof indicating the items at issue, which were marketed by GBZ, were being used on highway cars, but the EPA failed to show evidence that the products were being used on motor sports vehicles. As a result of this, the Court did not make a decision regarding whether or not the CAA prohibits the conversion of street vehicles into dedicated racing machines because there was no evidence that road vehicles had been converted into race cars. If there had been such evidence, the Court would have been required to address the issue.

SEMA’s submission of the amicus brief was significant for a number of reasons, despite the fact that the street-to-race car conversion problem was not resolved by it. First, it demonstrates that the United States Congress needs to pass the “Recognizing the Protection of Motorsports Act” (RPM Act), which is a piece of legislation that is supported by both parties and makes it clear that it is legal to produce, market, and install racing equipment as well as make conversions of this kind. Second, the opinion of the Court in this case did use language that was not entirely hostile, with the Court confirming that it is the burden of the EPA to produce evidence that emissions-related equipment is being used illegally on highway vehicles when making such a claim. This was one of the more positive aspects of the opinion.

The industry of automotive manufacturing in India is massive. It is speculated that the automobile manufacturers of India may approach the government with a request to modify the motor vehicles Act in order to permit some degree of customization. As of right now, the Supreme Court of India guarantees the highest possible level of safety in the cars and need to be aware that none of the alterations are inherently harmful. Additionally, these manufacturers should also promote aftermarket components that do not push their vehicles’ safety standards beyond what is considered acceptable for such vehicles.

This Blog is Authored by Shruti Avinash, a third year student of the NALSAR University of Law.