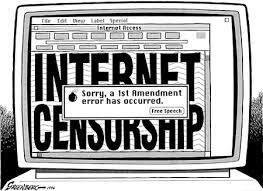 Modern democracies have long held that freedom of speech is a foundational concept, one that must be upheld in order for individuals to grow and flourish.

What’s wrong with the internet these days?

When it comes to free speech and the internet, it’s not just a matter of “same old issue, new technology.” Almost everyone in the Western world may theoretically use the internet to communicate with people across the world and hear what they have to say, thanks to its low entry fees and worldwide reach.

It is possible for online speech to have a significantly bigger influence than conventional media discourse. One of its greatest strengths is that it is completely unaffected by any media organisations. It has the ability to reach considerably more people than the largest satellite TV station or the most widely read worldwide newspaper, and to do it via video, audio, images, and text. Interaction between people is also possible, bringing divergent groups together or allowing them to provide their own knowledge or assistance.

Traditional media, on the other hand, has a far lower capacity for promoting or inciting action. In this sense, it exacerbates the issues that arise from the freedom of expression. This tight connection between freedom of speech and freedom from fear in modern democracies is most likely to be fought out on the internet.

Can the internet’s global reach withstand restrictions on its content?

Even though it can be difficult to track down who is accountable for what sites when they originate from and are hosted in several countries, different nations’ laws now govern internet communications and content.

Countries like China have been able to block its population from accessing a large amount of pro-democracy content on the internet. As a result, it is only a partial success, as consumers find inventive methods to break through awkward technical barriers.

Aside from authoritarian regimes like the one in China, which has just jailed Chinese businessman Lin Hai for two years after he supplied addresses to the democracy newsletter VIP Reference, there are many other groups and individuals who seek to restrict free speech from the top down by blocking or filtering out undesirable websites.

Internet freedom has been severely restricted by governments in the United States, India and Germany and France. And internet idealists are particularly concerned about a developing “censorship from within” as firms such as Microsoft, desiring the legitimacy of the censor, incorporate censorship capabilities in their software that consumers are unaware of.

How is free speech on the internet governed?

There is a great deal of uncertainty in the law on the internet. There are no regulations restricting the usage of the internet internationally. Even though it can be difficult to track down who is accountable for what sites when they originate from and are hosted in several countries, different nations’ laws now govern internet communications and content.

Although this is the case, most countries have begun to establish new legislation to better monitor and restrict online material.

Laws protecting free expression on the Internet in India are particularly lacking. As much controversy as there was, the legislative statutes remained firm and unwavering rather than succumbing to claims that they had constitutional resonance. Despite the absence of dedicated social media legislation in India, various sections under the country’s current so-called cyber laws can be utilised to seek remedy in the event of a violation of any rights in cyberspace, the internet, or social media. The legislation and the relevant provisions are listed below.

b)     Second, Section 69 of the Act grants to the Central or State Governments the power to issue directives for interception or monitoring or decryption of any information through any computer resource in the interest of the sovereignty and integrity or defence of India, as well as security of the State, friendly relations with foreign countries, public order, and investigation into an offence.

c)     A similar provision, Section 69A, provides for a directive from the Central Government to ban public access to any material via any computer resource on the same basis.

d)     This section allows the Central Government authority to issue directives allowing any agency, including the Federal Government, to monitor and collect traffic data or information through any computer resource for cyber security purposes.

e)     Section 79 allows for intermediary responsibility. Any data, information, or communication connection provided or hosted by an intermediary is free of any third-party liability.

The Information Technology Act of 2000, section 66A.

Section 66A, the most controversial of these regulations, has been making headlines recently. It’s a good idea to have a look at Section 66A in its entirety before diving into the meat of the matter. It was included to the Information Technology (Amendment) Act of 2008: Section 66A of the Information Technology (Amendment) Act, 2000 establishes penalties for transmitting insulting communications via communication service and states

a)     Information that is obscene or frightening in nature, for example:

b)     Information he knows to be false, but which he uses repeatedly via the use of computer resources or a communication device to irritate, inconvenience, danger, obstruction, insult, hurt, criminal intimidation, hostility. hate.

c)     Electronic mail or email communications sent for the aim of irritation, inconvenience, or to deceive the receiver or addressee about their origin will be penalised by imprisonment for a time that can extend up to 3 years and fines.

Article 19 (1)(a) of the Indian Constitution has been expanded by the Supreme Court of India to cover online speech.

After stating the Suspension Rules provide for judicial review of internet shutdown orders, the court instructed that the order be examined by a committee instead of declaring the shutdown unconstitutional in the union area.

In Anuradha Bhasin vs Union of India and Ors, where the petitioner contested the internet shutdown in the Union Territory of Jammu & Kashmir, the three-judge bench of Justices N V Ramana, R Subhash Reddy, and B R Gavai rendered the judgement.

In Jammu & Kashmir, the internet was shut down for the longest period of time ever recorded in Indian history, for five months. After Article 370 of the Constitution was repealed, an internet blackout was implemented on the union territory on August 5, 2019.

according to reports from the Software Freedom Law Center, supplied under the aforementioned laws and guidelines.The Supreme Court’s key concerns and observations are as follows:

Section 144 of the Criminal Procedure Code (CrPC) gives the state government the authority to impose limitations in order to keep the community safe and secure.

It was in August 2017 that India’s central government released a set of rules allowing authorities to order an internet shutdown under Section 144 of the Indian Telegraph Act, 1885. The rules provided authorities with the legal foundation to do so. Internet access in any region of the country can be cut off at any time under these guidelines.

“The power under Section 144, CrPC cannot be used to suppress legitimate expression of opinion or grievance or exercise of any democratic rights,” the apex court held today, and asserted that the magistrate, while exercising power under Section 144, was duty-bound to “balance rights and restrictions based on the principles of proportionality and then apply the least intrusive measure.”

This cannot be used to invoke Section 144 of the Criminal Procedure Code unless there is adequate evidence to establish that there is likely to be an incitement to violence or threat to public safety or danger,” the supreme court stated.

Using Section 144, CrPC too often would be an abuse of power, the court argued.The court ruled that the Shutdown Rules stated that the internet may only be shut down for a short period of time, not indefinitely.Additionally, the court asked for a quarterly review of orders to shut down the internet in compliance with the Shutdown Rules. Suspension Rules currently do not allow for periodic review or a time restriction for an order made under the Suspension Rules. ” It’s time to address this vacuum, therefore we’ve ordered the Review Committee created under Rule 2(5) of the Suspension Rules to conduct a periodic review in accordance with the criteria of Rule 2(6).”

Protection of the Right to Free Speech and the Media

It was also examined by the Supreme Court if Anuradha Bhasin’s press freedom as Editor of the Kashmir Times had been infringed by limitations.

From August 6, 2018, until October 11, 2018, Bhasin claimed that she was unable to publish her newspaper.Court maintained the right to use the Internet while observing “there is no question that the value of the press is well established under Indian Law.”. An efficient functioning democracy requires that all citizens have equal access to the media.

Article 19(1)(a) of the Constitution guarantees freedom of the press as a sacred right. In every modern democracy, this freedom is essential for the exchange of knowledge and the necessary dialogue that is necessary for a democratic society.

In order for governments to be responsible, they must always respect the freedom of the press.” A sword of Damocles shouldn’t be allowed to hang over the press indefinitely. Journalists should be accommodated in reporting.

‘We declare that Article 19(1)(a) and Article 19(1) safeguard the freedom of speech and expression, along with the freedom to engage in any profession or conduct any business or occupation on the internet’ (g). Article 19 (2) and (6) of the Constitution mandates that restrictions on basic rights must meet certain criteria, one of which is proportionality. The court noted this in its ruling.

The Universal Declaration of Human Rights also includes the right to internet access (UDHR). U.S. Constitution Article 19 guarantees “the right to freedom of thought and expression” for everyone, “which includes the freedom to hold and express one’s own views unrestricted by any kind of censorship.”

‘When the Human Rights Council of the UN has found that the right to access to the internet is a fundamental freedom and a tool to ensure the right to education, a rule or instruction which impairs the said right of the students cannot be permitted by law,’ said the Kerala High Court in Faheema Shirin R K v State of Kerala & Others recently.’ The court’s decision made it clear that those in society’s most marginalised groups suffer disproportionately and disproportionately from a lack of internet

The High Court of Kerala in a recent judgment in Faheema Shirin R K v. State of Kerala & Others, stated that “When the Human Rights Council of the UN have found that the right to access to the internet is a fundamental freedom and a tool to ensure the right to education, a rule or instruction which impairs the said right of the students cannot be permitted to stand in the eye of the law.” The judgment pointed out that the lack of access to the internet had a differential and higher impact on weaker sections of the society who depend on it for life and livelihood.

The internet has been boon as well as bane for the society. The pegs on which the freedom of speech rest is to how the authorities manage to respect the space for the people to express themselves. The speech is a way for the people to represent their opinions and idea in the public domain and thus progressing the society as a whole. We will not be successful in regulating global free speech issues that are impacted by emerging media until we are a more humane society. Right now, we’re accessories to the crime of the Internet’s slow obliteration of free speech.