The term wildlife actually includes all the living organisms, i.e., all plants, animals, and micro-organisms living in their natural habitat in wild state other than cultivated plants and domesticated animals. They do not have any human control. In order to conserve the wildlife and maintain them, it is very essential to provide an appropriate environment and support system. 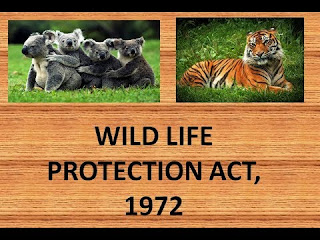 Under Article 252[i] of the Constitution of India, the Parliament passed the Wildlife Protection Act, 1972, at the request of 11 states.[ii] It was intended to provide for the national legal framework for wildlife protection. The Act adopts two conservation strategy: –
1. All species are protected in specific areas.
2. Specified endangered species are protected regardless of location.

AUTHORITIES CONSTITUTED UNDER THE ACT: –

PREVENTION AND DETECTION OF THE OFFENCES UNDER THE ACT: –

Section 50[v] of this Act confers power of entry, search, arrest and detention on the Director or any other officer authorized by him or the chief wildlife warden or any other officer but not below the rank of Sub – Inspector.[vi] The procedure for Section 50 is described under Section 100 of Code of Criminal Procedure, 1973.[vii]

POWERS GRANTED FOR PREVENTION AND DETECTION OF OFFENCES: –

Compensation:- According to the Section 54[viii] of the Act, On the information given by the Parliament, the central government may authorize the Director of Wildlife preservation or any other officer not below the rank of Assistant Director of Wildlife Preservation to accept compensation in terms of money from the person who have committed the offence or the person who suspected to be.[ix]
Release from offence:- By paying the compensation with regard to the offence made by a person against provisions of the Act, such suspected person if in custody can get a release from the custody and no further proceedings will be laid upon against that person for his offence.[x]
Cancellation of license: – The officer on compounding of any offence has the power to order the cancellation of any license or grant permit under the Wildlife Protection Act to the offender of provisions under Act. If an officer is not capable, then approach an officer who is authorized, for the cancellation of license or permit of the offender.[xi]
Punishment: – The sum of money taken as the compensation against the offence done by any person against the provisions of the Act, shall not exceed the sum of Rs. 25,000 as long as that offence, for which a minimum period of imprisonment is prescribed in Section 51,[xii] shall be compounded.[xiii]

In the case of Moti Lal v. Central Bureau of Investigation and Another,[xiv] the provisions mentioned under CrPC are generally relevant to the investigation and trial of wildlife crimes and offences if not especially opposed by the Act. Section 50 is not a complete code; it has to be read with other provisions of the law.
In the case of State of UP v. Lalloo Singh,[xv] the forest authorities intercepted a tractor trolley carrying sand being dug and loaded from the end of a river within the sanctuary. The authorities arrested the person carrying the sand and seized the tractor trolley.
HELD: – It was held that when the seized vehicle is taken before the magistrate, he has the power to pass the appropriate order in respect of that according to the law. The magistrate must keep in mind that the vehicle becomes the property of the government only when the same has been used for committing an offence under that act and has been seized.

In the case of Ashwini Kumar Bhardwaj v. State of Rajasthan,[xvi] The High Court of Rajasthan repealed the legal proceedings in a case in which challan have been filed against the officer who has not especially been permitted to file the complaint for wildlife offences.
In the case of S. Bylaiah v. State by Bannerghatta Police,[xvii] The Karnataka High Court revoked the legal proceedings in a case regarding which the complaint had already been filed by the police, but not by the officer of the rank specified by the State Government according to the notification.

“We’re gradually destroying our planet’s ability to support our way of life” – Carter Roberts, president of WWF. “What is not complicated are the clear trends we’re seeing 39% of terrestrial wildlife gone, 39% of marine wildlife gone, and 76% of freshwater wildlife gone – all in the past 40 years” – Jon Hoekstra, chief scientist at WWF.

The above quoted facts are not only of devastating nature for the animals but also to the human species because eventually we are the ones who will ultimately get adversely affected and the lives of future generation will be jeopardized due to our irresponsible behavior. Only that the wildlife protection act has come into being, it solely cannot solve the problem, there should be proper implementation by the centre as well as the state government. Moreover, it is the duty of each and every individual to protect and preserve the wildlife for the upcoming generations.