“Witch-hunting is deep rooted religious practice which is still prevalent in stigmatized Indian society. It primarily targets women, setup to punish the so called “evil-woman” and exploit India’s caste system and culture of patriarchy. According to the survey by National Crime Records Bureau, 134 people were killed across country, and 123 lives were put to end for alleged sorcery in Jharkhand specifically. Apart from this data there have been must were several instances which were not complained because of fear and tacit response of the panchayats at ground level. Sociologists view that Witch-hunting is driven by a strong motive of murder by men who capitalize on deeply rooted superstitions and system built on misogyny to lay blame on females.” 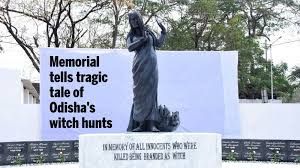 Is witch-hunt an essential religious practice?

“Under Article 24 and 25 of the Indian Constitution, a citizen enjoys the freedom to profess, propagate and practise any religion. Yet it is cardinal to consider whether the practise of Witch–hunting which is so detrimental to a class of individuals, would be included in ‘essential part of one’s religion’. For instance, the Bodo community of Assam believe that the reason for a person falling sick or the harm befalling the community is an alleged witch and her evil acts.

It is believed that remedy of any disease caused by such evil spirit or black magic can only be cured by a traditional medicine man (Ojha) who possesses the power of driving away this evil force sacrifices or tortures her during the Kherai Puja, one of the biggest religious festivals of this community. Consequentially, witch hunting cases are on the rise in the state of Assam owing to age-old and orthodox religious superstitious beliefs. Such a practice is based on extraneous superstitious beliefs, violates right to life right to live with dignity and also affects health of that individual. In the case of Durgah Committee Ajmer v. Syed Hussain Ali & Ors, the supreme court was of the opinion that any religious practice that stems from superstitious beliefs is extraneous, and exempted from protection under the Constitution.”

“Witch-Hunting is not a new phenomenon in India. It has been prevalent since decades and moreover has resulted into mob lynching and murders. Witch-Hunting is still thriving because of the Superstitious beliefs and lack of knowledge in far flung isolated areas. But it cannot be denied that the root cause of this menace is patriarchy; women being subjected to all ills because of no explanations. To control this unlawful practice and deter this appalling crime, some states enacted laws to penalise the perpetrators:

1. Odisha Prevention of Witch Hunting Act, 2013: “Any person who degrades the dignity of a women termed as ‘witch’ and is paraded with painted face or any act incidental thereto is punished with imprisonment of 1-5 years and/or with a fine Rs. 1000.””
2. The Assam Witch-Hunting (Prohibition, Prevention and Protection) Bill, 2015: “If a women commits suicide after being stigmatized and defamed in the society after being accused of turning into a witch, then the perpetrator(s) shall be punished with life imprisonment and/or be fined upto Rs. 5 Lakh.”
3. The Rajasthan Prevention of Witch-Hunting Bill, 2015: “Section 4 of this act provides for punishment of 1 to 5 years and minimum fine of Rs. 50,000 if a woman is tagged as a witch and is asked to consume inedible substances, paraded naked or is displaced from her property.”
4. Prevention of Witch (Daain) Practises Act, 1999 in Bihar: “Section 4 of this act provides that in case of any physical or mental torture inflicted on women identified as ‘daain’ either deliberately of otherwise shall be imprisoned for a term ranging from 3 months to 1 year and/or fine of Rs. 1000-2000.”

Need for developing a centralized legislation

“Although the states have enacted legislations to combat this phenomenon but central legislation is of utmost importance, to give it a deterrent effect. The state legislations provide a very meagre punishment and fine which will not suffice the loss of innocent lives. Moreover, under IPC, brutal acts of torturing women are often trivialized as “simple hurt” which is measured only in terms of physical harm caused to victim, completely disregarding the mental harm suffered by her. In the year of 2016, The Prevention of Witch Hunting Bill was introduced in Lok Sabha by Shri Raghav Lakhanpal, which specifically dealt with activities relating to witch hunting and categorized them as cognizable, non-bailable and non-compoundable offences. It has provisions of providing free medical aid to the victims of witch hunting. Since last 4 years the bill has been pending the actual culprits go on the loose without retribution. Therefore, there is acute need of adopting this kind of legislation with stringent provisions, to provide relief to innocent women who are boycotted from the society in the name of ‘witchcraft’.