According to Article 1[1] of The Constitution of India, “India, that is Bharat, shall be a Union of States.” The term ‘Union of States’ implies the ‘Federation of States’. In a federation, the power of administration is divided between the Centre and the regions in such a way that neither level of government becomes dominant to an extent where it can dictate the decision of others. 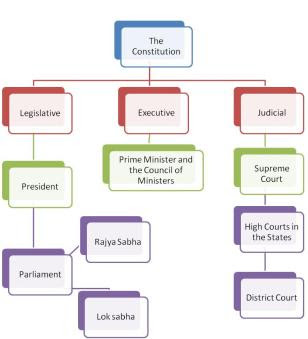 K. C. Wheare puts it forward as, “the method of dividing powers so that the general and regional governments are each within a sphere; co-ordinate and independent”.
The division of power can be viewed from the purview of[2]:
a) Territory, and
b) The subject-matter.
The powers are demarcated in such a way that there may be a common or concurrent area for both the Centre and State Government to operate simultaneously.

According to Article 245(1)[3], the Parliament may make laws for the whole of India or a part thereof and the Legislature of State may make laws for the whole or any part of the State. The established concept underlying the sovereignty of States is that laws made by one State cannot be functional in another State. Nonetheless, the extra-territorial operation of state legislation is sustainable on the ground of territorial nexus. [4]

When it comes to the Parliament having extraterritorial jurisdiction, it is stated in Article 245(2)[5], no law made by Parliament shall be deemed to be invalid on the ground that it would have extraterritorial operation. However, if such law has no nexus with India, the Parliament shall be incompetent to make law having extra-territorial operation. There is no straight-jacketed formula of defining what ‘nexus’ is sufficient for the application of the law to a particular object.
Given the extent of laws, we can conclude that territorial nexus involves deliberation of two elements[6]:
a. The connection between the state and extraterritorial jurisdiction must be real and not illusory; and
b. The liability imposed must be relevant to such a connection.
One must note that article 245 does not apply when acting under a Centre law. Also, under Article 298, a State can carry on business outside its territory and is not confined within its boundaries.[7]

The aim of the Constitution in the ambit of legislative relations is to secure a constitutionally strong Centre having adequate powers both in extent and nature so that it can maintain and protect the unity and integrity of the country. Under our Constitution, the legislative powers between the Union and the States entail a three-fold distribution, made by the three lists in the Seventh Schedule of the Constitution.[8]
The Indian Constitution pursues to construct three functional areas[9]:
i. An exclusive area for the Centre;
ii. An exclusive area for the States; and
iii. A concurrent area in which both the Centre and the States may operate simultaneously.

According to Article 247[12], notwithstanding anything under this chapter, Parliament may regulate the formation of additional courts for finer administration of laws made by Parliament or of any existing laws concerning a matter listed in the Union List.

Power of Parliament to legislate with respect to:

A matter in the state list in the national interest-

According to Article 249[14], if the Rajya Sabha (Council of States) passes a resolution supported by not less than two-thirds of the majority that it is necessary for national interest that Parliament should legislate with respect to any matter in the state list, then it shall be lawful for Parliament to make laws for the whole or any part of the territory of India with respect to that matter.
Such resolution shall remain in force for such period not exceeding one year.
Also, these parliamentary laws which parliament would not but for the passing of a resolution under clause (1), to the extent of incompetency cease to have an effect on the expiration of a period of six months.

According to Article 252[19], when legislatures of two or more states pass a resolution with respect to the matter they want the centre to make a law on, it shall be lawful for Parliament to pass an act for regulating such matter accordingly, and any act so passed shall apply to such states.
Such an act shall be amended and repealed by Parliament and not by the State legislatures.

According to Article 253[20], the Parliament has the authority to make any law for the whole or any part of the territory of India for:
a) implementing any treaty, agreement or convention with any other country or countries or,
b) any decision made at any international conference, association, or other body.
Requirements as to recommendations and previous sanctions to be regarded solely as procedural matters:

Given the distribution of power between the Union and the states, it is quite evident that the Parliament is vested with more power as compared to the state legislatures. This centralizing feature is inconsistent with the idea of federalism, however, the framers of the constitution were concerned with the unity of our nation, thus, differed from the traditional requirements of a federal constitution. Also, “Central control was considered necessary for achieving rapid economic and industrial progress”.[22]

1 thought on “Legislative Relations between the Union and the States”