“Our children are the rock on which the future will be built” – Nelson Mandela
Our children are viewed as the treasure of our nation. This national treasure should be guarded at any expense. A child passes into multifarious stages of life; out of these, the most momentous stage is adolescence. This stage is also usually conjectured as being related to norm-breaking behavior. The progenitors have to guide them on the right path. Yet due to the environment in which they brought up, they opt for the erroneous path which leads to juvenile delinquency. Juvenile delinquency is not just a social problem but also a legal problem. In the last few decades, the crime by children under the age of 16 years has increased. This booming rate of juvenile crime in India is a very concerning issue. The Indian legal system to tackle the problem has introduced various acts related to juveniles. 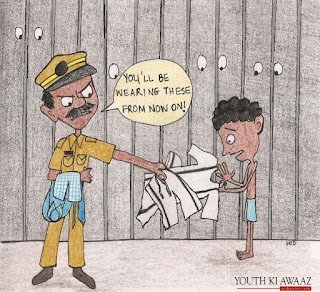 If any person who has not attained the age of majority committed an offense is considered as juveniles. In terms of the law, there was inconsistency in determining the legal age limit for juveniles. It has undergone many changes.
Under The Children Act 1960, a child indicates a boy and a girl who has not attained the age of sixteen years and eighteen years.
Under sec 2(h) of The Juvenile Justice Act, 1986 juvenile refers to a boy of sixteen years and a girl of eighteen years.

The first act in India which deals with the delinquent conduct of the child is “The Apprentice Act, 1850”. Children who are found liable under this act will undergo vocational training rather than sending to jail. It was supplanted by “The Reformatory School Act, 1876” under which reformatory school is built for young offenders.
Madras was the first province to enact juvenile legislation known as “Madras Children Act 1920”. It had proviso relating to custody, trial, and punishment for the juvenile. The aforementioned pattern was followed by Bombay and Bengal. Several states had divergent definitions for children. There was no conventional definition for a child under this act.

The first central legislation regarding juvenile was enacted in the year 1960 known as “The Children Act, 1960”. This act extends only to union territories. It aims to protect and maintain ‘neglected’ and ‘delinquent’ children. In 1986 throughout the country uniform juvenile justice legislation was passed. It is identified as “The Juvenile Justice Act, 1986”. It outmodes any state acts concerning the juveniles and children act 1960.
The Indian government has endorsed the Convention on the Rights of the Child on the 11th of December 1992. Therefore it repealed the juvenile justice act 1986 and enacted “The Juvenile Justice (care and protection) Act 2000” based on the standards prescribed in the Convention on the Rights of the Child. On 15th January 2016 “The Juvenile Justice (Care and Protection of Children) Act, 2015” was enacted. Under this act, if a child between the age group of 16 to 18 years commits a heinous crime then the child is tried as an adult before the court of law.

To stop children from engaging in a crime it is vital to know the purpose of involving in those activities. If this issue has been discussed beforehand it can hinder juvenile delinquency from the beginning.
The major reasons are:

Poverty is a state where a person cannot meet his demands due to insufficient money. It is a reality that we cannot survive without money. In many circumstances children’s main motive to commit a crime is money. As a result, they step into the erroneous path to develop their economic condition.

The main component of one’s happiness is family. It provides moral support, love, value, concern, and protection. Generally, a child who commits a crime does not have a proper family. If a family is involved in violence then the child is also bound to involve in violence. It is the burden on the parents to lead them on the right track.

Adolescent age is similar to a roller coaster ride where you can encounter both storm and blissful stage of life. At this age, their mind can be easily manipulated to commit a crime.

Commonly, crimes committed by young people are due to a lack of education. Education act as a key in one’s life. It grants knowledge and teaches discipline. Lack of education makes people choose the wrong track.

If young children get into contact with anti-social components of society they will involve in unlawful activities like prostitution, usage of drugs, etc.

It is composed of a Metropolitan Magistrate or a Judicial Magistrate of First Class and two social workers out of which at least one should be a woman.

It has the power of the Metropolitan Magistrate or a Judicial Magistrate of First Class conferred by CrPC.

1. If they were found liable for misusing the power bestowed on them.
2. If they failed in attending the Board proceedings without valid reasons consecutively for three months.
3. If they failed in visiting less than three-fourths of the sittings in a year.
4. If they become ineligible under subsection (4) as members during their term.

1. Article 21- free and compulsory education should be granted to children below 14 years
2. Article 24 – children should be safeguarded from hazardous employment
3. Article 47- good nourishment and standard living should be provided
4. Article 15(3)-state has the special power to make laws for the betterment of women and child
5. Article 39(e) – children should not be exploited and forced to enter into a job which is unsuited to their age and strength

Juvenile crimes cannot be omitted from society. However, the increasing crime rate can be lessened by eliminating the causes of juvenile delinquency. It is in the hands of the government to take inevitable steps to reduce the grounds for juvenile delinquency. Since society is becoming upgraded, the laws regarding the juvenile should be renewed. The law should include punishment that reforms the juveniles and transforms them into a proper human being. Juvenile crime is a grave issue in society. Everyone has a significant role in solving and controlling those issues.