The term Devadasi has been adopted from the Sanskrit language which deciphers to “female slave of the God”. This system is generally practiced in India, where low caste women and girls given in marriage to Hindu gods and dedicate themselves to those temples and perform as dancers to satisfy the gods. Those who are devoted to as Devadasis to the goddesses are the devotees of Yellama who are predominantly Dalits and Bahujan’s from the Valmiki and Madiga castes. Young girls who still haven’t attained puberty are also offered to the temples by the performance of marriage which is done by the priest of that temple. Once the girl becomes an adolescent, an additional ceremony is conducted under the assistance of wealthy landlords belonging to the upper class. When a woman is being married off to the local temple, her right to marry a mortal man and her status of a wife is precluded. She and her children will cease to enjoy the right to inherent any such property.[1] 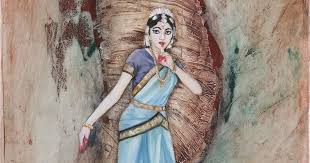 These Devadasis are sexually exploited by individuals belonging to the higher caste and the temple priests. Across the world, many reforms have a rampant demand to eradicate the Devadasi system as it leads to sex slavery and child prostitution where women and children are offered to the temples by their parents as means of income.[2]

The Emergence of Devadasi System

The Devadasi system emerged under the Dynasty rule of Keshari during the 6th Century in parts of Southern India. The practice of the Devadasi system came into begin when one of the queens belonging to the Keshari dynasty decided that few women who were exemplary classical dancers should be married off to the almighty in order to honor them. The devadasis had a very important socio-economic status in the community and they played a crucial role in which lead to the transformation of dance and music culture.[3]
The main idea behind this system was embedded with a lot of recognition as the women who were chosen to become devadasis were precisely being married off to the god, and being the wives of the god, they were to be treated as goddesses as well. Secondly, they were regarded as very honorable women, as they were able to completely devote themselves to the god and keep their most important senses and humanly instincts in control as were treated as auspicious. Their major responsibilities included taking good care of the temple and be able to dance gracefully, most commonly Bharatanatyam, which would be displayed by them at the various temple occasions.[4] The devadasis were not only particularly from the poor or the Dalit background, but girls from higher class families were also dedicated to the temples. [5]

When the temples were destroyed the customs related to dance and music emerged as a direct route towards prostitution which has been severely eroded. The devadasis present started getting involved in the commercial business of sex industry and few others began to run their own brothers in their villages and houses as the means to earn income. A survey[6] was being conducted in Karnataka by an NGO called the ‘Joint Women’s Program for NCW’ which displayed that around 60% of the young girl has to become devadasis because they were forced by their parents, 30% of them devoted themselves due to custom and the rest of them were in it because of their family heritage. They were looked at like objects which belonged to the temples in those villages and were considered as “public property”.

According to a study[7], it was revealed that more than 30% of the devadasis migrated to the red light areas present in Bombay. What we can now witness is how the transformation of the Devadasi women has changed from those highly accomplished dancers who were respected and had a high social status to those who have now become common sex slaves and are looked down upon by the community and their very one families.

Throughout their lives, the devadasi girls have always faced discrimination and injustice on the mere basis of their caste and always subjected to prejudice and oppression by the people belonging to the higher-class members of the society. In majority of the rural areas, the devadasis are always being suppressed to public humiliation and mockery.

In other cases, the reason behind dedicating a woman to god was that these families would get the support from the upper-class families. Hence, the parents would take care of their daughters and ensure that they look presentable as she may attract more powerful men. Most commonly, when the devadasi women’s youth disappears, she is no more being desired for sexual pleasing therefore not being economically protected. The uncertainty and ambiguity during the lifetime of the devadasi starts beginning once she gives birth and her patron deserts her leaving her alone with the burden to take care of herself and her child. The devadasi women are forced to remain unmarried and when they are not of the desired age, they have to start looking for odd jobs and sell their bodies away to the rich people and also turn begging.

Apart from the other risk that the devadasi women face, the threat of getting AIDS is the most dangerous. The women who sacrifices herself to this custom has many sexual partners which is a serious concern regarding personal health and hygiene. As a consequence to this, women suffer and undergo a lot of reproductive complications and also attract various infections and other deadly sexually transmitted diseases. According to statistics around 25% of the devadasi women have been infected with the disease of HIV and always disregard their health conditions assuming it to be her life. The usage of contraceptives is considered to be a strict taboo that is not permissible. In order to avoid unwanted pregnancies, women are forced to place a stick that is being coated with various things inside their uterus. The harsh effect that is have on the reproductive health and other deadly diseases that shall follow are taken into consideration.

Even the children of devadasis do not face better living conditions as they do not enjoy the hereditary rights and are not legal heirs and successors of any property as they are being devoid of their rightful father and cannot claim any legitimacy.
The system of devadasi violates various clauses that are mentioned in the Universal Declaration of Human Rights as well which completely prohibits the practice of sex slavery and sex trade.[8] It also is against the Indian Constitution which stands for equality and dignity of individuals in the country and this system completely disregards it.

The Devadasi system has turned out to be a custom that degrades the honour of the women who are a part of such a system where they are being exploited sexually and which also encourages and provides traditional sanction for the prostitution of young girls. Even though the practice of this system in not prevalent in India as it has been abolished by the international and domestic legislations, there are numerous girl who are still devoted to the customs of the devadasi system due to economic, social and religious explanations. These women seek to this approach as it is their only way to earn a livelihood and to also gain social status in the community and be showered with the blessings of gods to prosper in the future. Even though this system still continues to prevail through history, the abundant increase in the crimes of sexual violence has led to introduction of legislations to punish the people promoting and following the devadasi system. There are legislations which shall be enacted and display vigorous punishment which will end the social pressure to still follow this tradition. Very simple steps can be undertaken to complexly abolish this system which further continues to subjects hundreds of young girls and women to a lifelong punishment of sexual exploitation and prostitution.

1 thought on “Devadasi System: Social Justice To The Temple’s Wife”