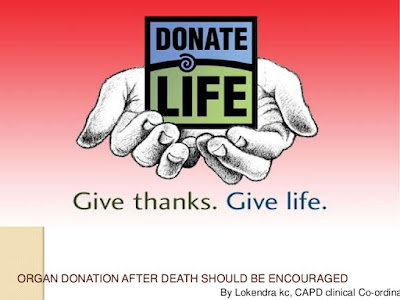 Organ, eye and tissue transplantation brings a happy and healthy life to a healthy body. Sometimes, a needy person gets a new life just because to getting an organ. The biggest contribution to humanity. It brings a new hope for the thousands of people awaiting transplants. Every day several people die because of a defect in an organ because they were not lucky to find a donor.

It is a process where an organ is taken from the body of a person, provided that person is healthy enough and transplanted into someone else’s body who needed it to save his life.

Why do people fear donating organs?

When it comes to the topic organ donation, 90% of the people support the fact but surprisingly only one-third of the people register for donation and become donors. Many people have a belief, if the doctors know that you are a registered donor, then they won’t try their best to save your life, says Brian Quick.[1] Often people hate talking about death as no one wants to die, as most of the times this process takes place after the death of a person. Sometimes people find it a taboo as it prohibits their cultural practices and they don’t want to become one to destroy or to harm their culture.

Lack of awareness ‘a chaos’

The role of fake rumors and misconceptions against the process of organ donation affects those who have a positive approach regarding this activity. It affects the mindset of a person who had took a decision to give life to someone else, plays with trust of the people who are a part of such tremendous job thereby prohibiting people to take part in such incomparable activities. It is a well known fact that a true, a good rumor takes more time than a fake rumor to spread as it is the role of the society. This creates a chaos, resulting in a facade.

A big decision can save many lives

It is truly hard to take any decision. We have to go through pros and cons of the matter while taking a decision. When it comes to a decision of donating organs to give someone a new life after you, it requires a big heart and a positive approach. Patience is required to make such a bold decision. It not only saves lives but also touches as well as changes the lives associated with the one who receives the organ. Most of the times brain dead patients are most suitable for organ donation. If harvested within the critical time, a person can donate and save up to 5 lives.

Organ donation finds no place for discrimination whether its on the basis of caste, creed, gender or religion. It supports and promotes the should be eternal theme of equality. It also gives a lesson to us, “we all are the creatures of god, we all comprise the same organs then why to discriminate on social and physical issues”.

Here are some incidents where by a single bold decision lives were saved:

·         The All India Institute of Medical Sciences (AIIMS), Delhi, received organ donations from the families of two brain dead patients in a span of past 48 hours. The two hearts, four kidneys, two livers, four corneas and bones of a 26-year-old man from Uttar Pradesh, and a 61-year-old Delhi man helped in giving a new life to seven people[2].

·         A recent case in Surat, Gujarat where Kamini Patel, a 46 year old brain dead woman, who’s lungs were damaged having lung transplantation as the only option to get her life saved, died but further gave lives to 7 people including one suffering from Covid-19.[3]

A  recent UK based study, where researchers studied the organ-donation systems of 48 countries over 13 years[4]and found that Spain, with an opt-out style of consent, had the highest rate of organ donation of the countries and it further represents a successful model to emulate. Further the Spanish model is held up as the ideal, says Eamonn Ferguson, a professor of health psychology at the University of Nottingham and one of the researchers on the study. The presence of an opt-out system, along with coordinated, hierarchical and interlinked system of well-trained organ-transplant professionals helps to carry out the process. Adding to the complexity of the issue is a fact that the rate of live organ donations is lower in countries with opt-out systems.

The legislation of the Transplantation of Human Organs Act, 1994 [5]and its amendment[6]was aimed at regulation of removal, storage and transplantation of human organs for therapeutic purposes and for prevention of commercial business relating to organ dealing. This legislation found the base for the illegal trafficking of children, people who were trafficked to illegally sell their organs at a high commercial rate.

In India, organ donation is not a crime but donating organs for commercial purposes is a crime under the mentioned act. Several cases came out in past few years where illegal kidney trafficking was practiced. “Kidney transplant if voluntary, non-commercial is not illegal” said, the Delhi High Court in a case under the Transplantation of Human Organs Act.

Organ donation is a way of giving someone else a life when your life is no more. Someone else remembers you and blesses you for such a help. Organ transplantation needs awareness, we all should donate organs. One thing should be kept always in mind that organ donation should be for the welfare of someone and not for the purpose of a business. The laws have helped to stop the illegal businesses relating to organs and we should also contribute in spreading awareness regarding legal organ donation and preventing illegal trafficking.

‘Donate your organs; you’ll get a chance to be alive even after death in someone’s body’