This article portrays the picture of farmers struggling through various issues through the Farms Act 2020. The primary provision of the proposed legislation is intended to help small and marginal farmers who have no means of either negotiating for the better price of their farm produce. 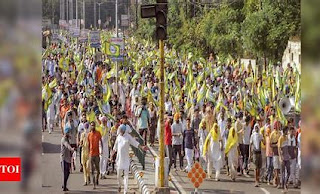 The farmers who were suffering from Pandemic are now protesting against the Farms Act, ignoring the risk of their lives. The exploitation through which farmers were suffering has started again. “Dealer” of the Mandis and state could lose commissions and Mandi fees respectively. This article portrays the real picture of the act which looks so smooth on the paper.

On 27 September 2020 the President of India gave his approval to the three farms Bills; those were proposed and passed by both the houses of Parliament. The name of these three new farms act are- The Farmer’s Produce Trade and Commerce (Promotion and Facilitation) Act,2020, the Farmers (Empowerment and Protection) Agreement on Price Assurance and Farm Services Act,2020 and the Essential Commodities (Amendment) Act, 2020, known as “New Farms Act”.

Initially, these three new Acts collectively known as NEW FARMS ACT 2020 , were introduced as ordinances in the month of June, 2020 and then drafted as bills to produce in front of Parliament. Subsequently, these bills became Acts, despite of huge opposition from many corners of the Country. Mostly the resistance came from the states like Punjab, Haryana, and some parts of Madhya Pradesh and Chhattisgarh, against these new bills. Various Farm Organizations like Kishan Sabha and Political Parties expressed their Discontent on the passing of this act. Every stake holder has their own grievances and issues regarding the new Act. But Government of India has a different view from the opposing parties. The Government has envisaged that the new Act will bring revolutionary changes in the Indian Agricultural sector by providing them freedom to sell agricultural produce to any one and anywhere and also authorizing them with proper bargaining power through contract farming.

1) The Farmer’s Produce Trade and Commerce (Promotion and Facilitation) Act will permit sale of agriculture produce outside the mandis regulated by APMC of State Government.
2) The Farmer’s (Empowerment and Protection) Agreement on Price Assurance and Farm Services Act will provide legal support to contract farming.
3) The Essential Commodities (Amendment) Act will deregulate the production, supply and storage of food items like- cereals, pulses, potatoes, onions, edible oil seeds etc.

The first Act i.e. the Farmer’s Produce Trade and Commerce (Promotion and Facilitation) Act will bring down inter-state barriers for Farmers to sell their Agricultural Produce. It allows trading outside the premises of Agricultural Produce Market Committee (APMC) Markers such as Farm gates, factory premises, ware houses, silos and cold storages. The private players like big retailers, corporate have been given a free hand to enter into the agricultural Sector and can do the business deals directly with the Farmers. So, it will create the competitive environment where farmers have the choice to whom they wish to sell their farm produce and at what price. It will boost farmer’s earning through open market system.

The second Act i.e. the Farmer’s (Empowerment and Protection) Agreement on Price Assurance and Farm Services Act promote contract farming, although this system is not new but the Act will provide a national level framework for it. So, new Farmer’s can sign an agreement with private companies, exporters, retailers and processing industries to sell their farm produce at a mutually agreed price before harvesting.

The third Act i.e. the Essential Commodities ( Amendment) Act pull out cereals, pulses, potatoes, onions, edible oil seeds etc. from the list of essential commodities, so it remove the cap on string limits of these items and give more liberty to the processing units and other private sectors. But Government can regulate in exceptional situation such as natural calamity, high inflation in price, famine and war, etc.

So overall these three acts are intended to promote both the farmers and the private sector in order to go for holistic developments. Government facilitates farmers with Minimum Support Price (MSP) and system of APMC Mandis.
So, the problem arises is that what the three bills have to impart on MSP and system of APMC. So the answer is that these Acts have not ended the MSP and the APMC will not stop functioning.

WHY THE ACT IS SO CONTROVERSIAL?

The bills are brought into act in the time of pandemic when the whole country is suffering. As the act has a direct impact on farmers, economy, centre- state relations, APMC Mandis. The farmers are raising questions on the constitutional validity of these acts due to many reasons. As the government had nowhere strongly mentioned about the MSP in the act,

Taking into the consideration, the condition of Indian Farmers, for farming on their fields, they used to take loan from the zamindars and when they could not pay their loans on time, the zamindars used to buy their Farm produce with very low amount. And again they take loans from the zamindars for farming to earn their living with their farm produce and the cycle goes on with the exploitation of farmers done by the zamindars. So, for solving the problem of farmer exploitation, government interfered in it and introduces APMC Act( Agricultural Produce Market Act), which says that Farmers cannot sell their produce directly to the consumer nor anyone can directly purchase from them, all the sales of the farmer’s produce will be done through the APMC Mandi.

Every state government has its own APMC and state divides the Mandi according to their area and each area has its specific Mandi. if any trader wants to purchase anything from the Mandi he has to take the license of that particular Mandi. Similarly, the farmers of that area are allowed to sell their production in that particular Mandi. This system of selling and purchasing things from the particular Mandi is mandatory for the Framers and the traders. Now, if a farmer wants to sell his product through APMC, there will be an auction to sell that produce and the auction is divided into two parts 1) MSP 2) Price Discovery.

This MSP is decided by govt. of India, and not all crops have MSP, there are only 22 crops on which Govt. provides MSP. MSP is the initial point (Fixed Amount) from where the auction will start taking place, the product or produce can’t be sold at a lesser price. Except those 22 crops which come under MSP all the other crops are sold under “Price Discovery”. It can be interpreted as on the basis of demand and supply of that produce in the market, the price is discovered for that crop. So, the product or produce is sold in APMC through a supply chain which means when the farmer produces something, there is lots of middle man before it reaches to the consumer and hence, end up taking the lesser profit than they deserve to get for that produce.

But now, the APMC mandis have also started to exploit Farmers. What APMC mandis are doing is, that they have started making their own cartels and don’t purchase the product at MSP and farmer’s could not wait for much time as their crops could not be stored beyond a particular time and hence, farmers are compelled to sell their farm produce as decided by the cartels made by APMC Mandis by bearing their own loss.

One more issue is that Government has not given strong clarification on continuation of MSP. So it is creating a sense of mistrust in the mind of the farmers against the Government. And it is not a good sign for country like India whose Farmers are the backbone of the country. Government has significantly deregulated its authority on agriculture market by giving private companies a free hand to deal with the farmers and as we know the private enterprises are only profit oriented. So the problem arises for the small farmers who don’t have much land. Suppose if there is the 2 to 3 tones of farm produce and the private companies offer them the low amount than what they had spend, the farmers will be compelled to sell their farm produce at the rate decided by the private enterprises and will bear losses.

This farms act is good for the big farmers who own much land and 85% of farmer in India are small farmers who don’t own much land and aren’t able to produce an ample amount of farm produce. The absentee landlords now mostly go for direct contract with retailer, corporate rather than the tenants which again disturbed the income of small farmers. And finally, the farmers raised the issue of completely throwing agriculture into open markets as during economic crisis the sluggish market will not provide profitable price to the farm produce and the farmers will be compelled to bear losses.

The issue has been raised by many farmers that how can the centre take decision on something which has been listed under the State list. In Indian Constitution, the 7th schedule has defined the subjects of jurisdiction for union and state Governments. List 1 has subjects reserved for union Government (Union List), List 2 has subjects reserved for the state Government (State List) and List 3 has the subjects reserved for the both state and Union government (Concurrent List). Agriculture has been listed under the entry no. 14 of State list. Now while formulating the Farm Act union Govt. has invoked the entry 33 of list 3 which says that parliament can make laws in Public Interest on the matters involving trade, commerce, production, supply and distribution of industrial Products. Article 249 of Indian constitution deals with “the power of Parliament to legislate with respect to a matter in the state list in the national interest.” This article gives the power to the parliament to make laws with respect to any matter enumerated in the state list if it comes to the national interest.

It is a reality that none of the systems on the earth is perfect, so as our APMC mandi System. It has many faults which need to be addressed. But replacing one faulty system with other one (Farms Act 2020) is not a wise solution. In a progressive country like India, it is very necessary that both Government Sector and private sector coexist together, work peacefully and should maintain a balance in the system. It is the job of the Leaders, who formed the act, to give proper and enough clarification on MSP, APMC and other back-up plans like- fast resolution of conflicts between farmers and corporate, if any takes place. Because the trust of the farmers need to be more active and direct assistance from authorities like direct cash transfer, universal basic income and food and nutrition availability. So agriculture which is a way of life for many Indians, decisions taken on behalf of it, should be properly scrutinized and designed by the policy makers.