Cyberspace alludes to the virtual computer world, and all the more explicitly, is an electronic medium used to frame a worldwide Computer organization to encourage online correspondence.[1] 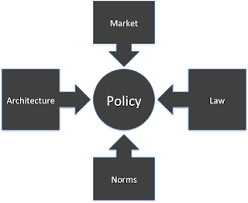 Modes of regulations in Cyberspace are:

In order to function and be accepted in a society, a person will live by its norms. You believe in the role of educating people so that new norms may develop as new technology is used.

As an example of the change of attitudes that result from education programs you might look back on smoking ads that once portrayed cigarette smokers as beautiful, sophisticated, sexy people with the ads of today, where a blackened sponge is wrung out to show the impact of smoking on the lungs.
Once education creates a new norm, community behavior it is regulated by peer and social pressure. Norms can involve the adoption of “rules” for regulating behavior. These rules may not have the force of law but they create a level of behavior that anyone wanting to be accepted in that group ought to adopt.

People that breach norms may incur sanctions. These sanctions do not have the force that penalties or custodial sentences might have in a legal setting. The sanction when imposed may result in an infringer being placed outside a norm group. On showing contrition, particularly where there contrition is matched by entry into a re-education program about the norm, the infringer may be readmitted. Usually a body or entity that is a part of the group will make findings about any infringements and the sanction that ought to apply.
The norms that come about as a result of education may need to be put into writing. In a technological era this writing might take the form of Acceptable Use Policies, Terms of Engagement and other polices that act as a norm but may not be legally enforceable like a contract.

You believe in parliament’s capacity to make laws to regulate the behavior of its citizens. Where parliaments are silent, the courts will make precedents.
People who break the law suffer sanctions – these can be civil penalties of loss of money when an infringing party is ordered to pay damages to another. There is also criminal law through which you believe society establishes what constitutes acceptable and unacceptable behavior. Unacceptable behavior is regulated through a sentencing regime – lesser offences might incur fines and bonds, more serious ones some form of custodial sentence.
You are satisfied that if parliament makes a law then it is made by the people. What is parliament if nothing other than a representative body of the people as expressed at elections?
Once a matter becomes law the law itself ought to be black letter – it ought to be clearly understood, free from doubt and dispute. Breaches should result in similar punishments.

You believe in the power of human to design systems that regulate behavior. To control speeding in a back street you would design and build speed humps. In a digital world you believe in the power of software code to be able to create a form of regulation. For example, you might design a technological protection measure in your software that prevents a program with a license of ten users from allowing an eleventh user to open it over a network.

You find education / norms too slow to bring about change. You find law too expensive. You can design the world you want and have people regulate their behavior because such restrictions in behavior are inherent in what you have created. You consider yourself a geek and technological master of non-technical people who use other forms of regulation.
You also realize that if you can regulate behavior through design then your product will be more valuable. You usually work in the private sector though increasingly your skills might be sought in publicly owned entities wanting to develop monitoring and surveillance systems.

You are convinced that market forces regulate behavior. If a manufacturer creates an unsafe product this will become known to the market and consumers will not purchase these products. If a software designer wants to copyright and license his or her work, then the market will determine if the software is worth buying as compared with that of competitors. Markets will determine what survives and what doesn’t in the market place. Market forces also use price as a form of regulation.
Out of all these four modalities code has prevailed over other modalities of regulation online as The Internet Watch Foundation is responsible for deciding which material should be blocked from public access for criminality, but is a private body a desirable form of regulation.
It is the revolutionary tool that has gripped our society with such omnipresence – we literally are capable of entering into cyberspace anywhere and at any given moment – that man forgets of its youth. Few can acknowledge quite the impact it has had in demolishing the old world and sculpting the new, but for all that it has done, the internet has been perennially coupled with a crucial problem: how exactly is it to be regulated?
Thinkers in the “age of the internet” have disputed over this key issue for years, and although it is important to look at regulation of the internet from a theoretical viewpoint, it is equally important to analyze what is being done in society today and to determine how effective these current mechanisms are. We will study the role of the Internet Watch Foundation as it attempts to regulate Britain online, and examine the advantages of having this private organization regulate the internet, whilst outlining the concerns of such a form of internet regulation.

Lessig describes in his book, everyone’s behavior can be described as a “pathetic dot” and is being constrained by four modalities of regulation: law, norms, market and architecture[2]. In other terms, regulation is the complex interaction of the above mentioned forces.
In order to better explain these concepts, we will make reference to Lessig’s own example of smoking. If one wants to smoke, they would face some constraints, which affect their decision.
Firstly, the law. If you are 15 and your country forbids selling cigarettes to minors, no shop would sell you any cigarettes and, thus, you will not be able to smoke.
Secondly, norms existing in any society, namely a set of social rules that govern an individual’s behavior. In the case of smoking, there is an informal rule that a smoker is not supposed to light a cigarette in a confined space without asking for permission first.

Thirdly, the market. If, for instance, the price for cigarettes went up, it is likely that some smokers would be discouraged to smoke and would potentially quit.
Lastly, the architecture, which is the technology of cigarettes. Your will of smoking could be limited, for example, by reducing the quantity of nicotine contained in them.
Based on these concepts, it becomes clear society is regulated through different limitations.[3]
However one great difference exists between the situation of Bukovina and the one that society is facing now online: the private companies. If there is no government that has the competence of regulation, companies owning the services online will take matters into their own hands and regulate at their own will since the consumers online can be exploited economically. This was also pointed out by Lessig. Such an argument leads to the conclusion that the answer to the question is no. A totally free, self-­regulating market can and will not work.

We can call each constraint a “regulator,” and we can think of each as a distinct modality of regulation. Each modality has a complex nature, and the interaction among these four is also hard to describe. I’ve worked through this complexity more completely in the appendix. But for now, it is enough to see that they are linked and that, in a sense, they combine to produce the regulation to which our pathetic dot is subject in any given area.
Law regulates behavior in cyberspace. Copyright law, defamation law, and obscenity laws all continue to threaten ex post sanction for the violation of legal rights. How well law regulates, or how efficiently, is a different question: In some cases it does so more efficiently, in some cases less. But whether better or not, law continues to threaten a certain consequence if it is defied. Legislatures enact prosecutors threaten courts convict.

Markets regulate behavior in cyberspace. Pricing structures constrain access, and if they do not, busy signals do.
Areas of the Web are beginning to charge for access, as online services have for some time. Advertisers reward popular sites; online services drop low-population forums. These behaviors are all a function of market constraints and market opportunity. They are all, in this sense, regulations of the market.
Finally, an analog for architecture regulates behavior in cyberspace— code. The software and hardware that make cyberspace what it is constitute a set of constraints on how you can behave. The substance of these constraints may vary, but they are experienced as conditions on your access to cyberspace. In some places (online services such as AOL, for instance) you must enter a password before you gain access; in other places, you can enter whether identified or not.

In some places the transactions you engage in produce traces that link the transactions (the “mouse droppings”) back to you; in other places this link is achieved only if you want it to be. In some places, you can choose to speak a language that only the recipient can hear (through encryption) in other places encryption is not an option.
The code or software or architecture or protocols set these features, which are selected by code writers. They constrain some behavior by making other behavior possible or impossible. The code embeds certain values or makes certain values impossible. In this sense, it too is regulation, just as the architectures of real-space codes are regulations.
Architecture, laws, and customs maintain and represent whatever balance has been struck in real space. As we construct and inhabit cyberspace communities, we will have to make and maintain similar bargains though they will be embodied in software structures and electronic access controls rather than in architectural arrangements. Therefore, individuals are no more than a pathetic dot.