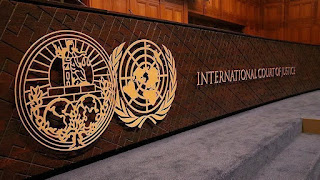 International Court of Justice (ICJ) is the highest Court of the world. It was established by the United Nations organisation in 1945. It is one of the six principal organs of United Nations. It has contributed a lot in development of international law and in maintenance of international peace and security. However, ever coin has two sides. Along with numerous contributions, it has some limitation of its own. It is mainly dominated by the other organs of UN organization which makes the states of the world feel that it is a biased body. The limitations of ICJ need to be taken into account and reforms need to be introduced in order to improve the functioning of the Court. This research paper mainly deals with the study of International Court of Justice, its contributions and limitations. Further, the reforms which need to be introduced in the present times for improving the efficiency of the Court are also mentioned.

The International Court of Justice is commonly known as ‘World Court’. It is the principle judicial organ of United Nations organization. ICJ is believed to be the successor of ‘Permanent Court of International Justice’. PCIJ was established in 1920 by the League of Nations which is believed to be the predecessor of UN. But, after the World War II, the functioning of PCIJ and League of Nations came to an end. After this, the need was felt for the establishment of United Nations organisation. As a result of this, UN set up a committee in April, 1945, ceased the functioning of PCIJ and set up a new Court which came to be known as International Court of Justice.

However, the Statute of ICJ is a copy of statute of PCIJ and Article 92 of UN Charter also provides that the statute of ICJ is based on statue of PCIJ. Further, the judgements of PCIJ are also enforceable in ICJ. This shows that ICT and PCIJ are quite similar.

ICJ was established in June, 1945 and started functioning from 18th April, 1946. Its seat is located at the Peace Palace in The Hague, Netherlands. Currently, John Donoghue is the president of ICJ. As it is an organ of UN organization, Chapter 14 of UN Charter (Consisting of Articles 92 to 96) deals with the ICJ. Apart from that, ICJ has its own statute which has five chapters and 70 articles. For easy communication among the member states, there are two official languages of ICJ i.e. English and French.

CONTRIBUTIONS OF THE ICJ

ICJ has played a significant role in the progress of international law and has maintained peace and security worldwide. The major contributions of ICJ are as follows:-

A)    Establishes ‘Rule of Law’– As remarked by Judge Nagendra Singh, ICJ is the basic necessity for the establishment of ‘Rule of law’ among the states. This means that ICJ maintains the Supremacy of law which binds the states to act in a ‘just’ and ‘appropriate’ manner and maintain friendly relations with each other.

B)    Settlement of Disputes: The Court’s main function is to settle the dispute that arise between the states and are of international importance. Till date; around 180 cases are entertained by it. By doing this, the Court contributes in maintenance of international peace and security and prevents the states from making use of arms and weapons to solve their disputes.

E)     Clarifies vague international law: Many a times, some rules of international law requires clarification as to what it wants to convey. This power to clarify the vague concepts of international law is given to ICJ. For example-In the Anglo Norwegian fisheries case (United Kingdom v. Norway, 1951 I.C.J. 8.), the Court clarified the law related to delimitation of fisheries zone and the method of measurement of the territorial sea.

F)     Interpret UN Charter and international treaties: When the dispute arises and requires the interpretation of Charter or a treaty, the Court is responsible for its interpretation. For example: In the Nicaragua v. United States Case (1986) ICJ Rep 14, which was related to military and paramilitary activities in and against Nicaragua, ICJ interpreted the UN Charter provision related to intervention and settled the dispute accordingly.

G)    Doctrine of Precedent: Although Article 59 of Statute of ICJ undermines or even Prohibits the ‘Doctrine of precedent’ by stating that the decision of the Court shall be binding only on the parties to dispute but ICJ follows the doctrine of precedent and has not deviated from its past decisions till now.

CHALLENGES FACED BY THE ICJ

ICJ has contributed much in the progress of international law but there are a number of challenges associated with its composition, jurisdiction, election of judges, etc. These obstacles stand as an obstacle in the proper functioning of the Court.

As pointed out before, ICJ has some limitations also associated with it that hinders it’s proper and effective functioning. So, the major limitations or the challenges faced by ICJ are:

B)    Election and re-election of judges– There are 15 judges at ICJ that are elected by the Security Council and the General Assembly for tenure of nine years and they can even be re-elected if they are further recommended after the expiry of nine years. A judge should be tested for his or her qualification and those who got absolute majority in both Security Council and General Assembly are elected which are not even judicial bodies.

C)    Determining its own competence– The Court has the right to decide on its own whether it has jurisdiction over a case or not. It is sometimes felt that this power is being inappropriately used by the Court. For example- In UK v. Iceland case, when Britain filed a complaint against Iceland, the Court contended that it has no jurisdiction to decide the case.

F)     Consensual jurisdiction– Mostly, the jurisdiction of ICJ is based on consensuses of the parties to dispute that is it only accepts cases where both defendant and the accused agree to present the case to the Court. This limits the Court’s power and questions the efficiency of the Court.

G)    Enforcement of judgments– The responsibility of successful enforcement of judgments given by the Court is given to Security Council but Security Council has proved its incapability in doing so. For example- In Corfu channel case, Albania refused to implement the orders given by the Court. Further, similar issues arose in the Nuclear test case.

I)       Concept of ad hoc judges– When a country to dispute does not have any representation among the fifteen judges of the Court, an ad hoc Judge for that country is appointed to represent that country’s interest. But, this concept is widely criticised as it questions the impartiality and ‘just’ nature of the other judges of the Court.

We have already talked above the contributions and the limitations of the ICJ. The limitation or the challenges faced by the Court needs to be addressed in order to enable the Court function efficiently. There are some recommendations or suggestions which can help in improving the status and the functioning of ICJ in the present times. These suggestions are as follows:

1.      There is a need of reduction of the dominance of UN organization and power given to the Security Council on ICJ.

2.      There is an urgent need to replace the consensual jurisdiction with the compulsory jurisdiction to improve the status of the Court.

3.      All the judgments of the Court should be binding on all the states.

4.      There is a need to replace the current method of election of the judges because the judges should be elected based on their qualification, talent and experience and not based on the votes. The concept of votes proves the political functioning of ICJ.

6.      The concept of appointment of ad hoc judges should be removed. The aim of all the judges is to do the justice and there is no need of representation if a State is right in its case. This provision even questions the impartial nature of the judges.

8.      There is need of expanding the Court’s jurisdiction to the individuals, groups as well as private enterprises. It should not be only limited to the States.

By this research paper, it can be concluded that the International Court of Justice is performing various functions which include settlement of all the disputes between different states, establishing ‘rule of law’, providing advisory opinions to different organizations, helping in development of international law, interpreting UN charter and treaties when required, etc. This shows that ICJ has made a huge contribution in maintaining rule of law and international peace and security across the world. But there are limitations of the Court as well. Proper efforts should be made to deal with these limitations and abolish them. Further, additional efforts should be made to improve the functioning of the Court.