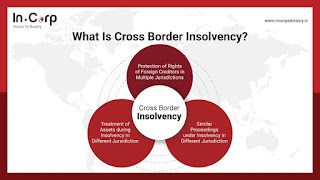 The economies of nations are linking and being integrated into a global economy as a result of increasing globalisation. Globalization has made it easier to perform cross-border economic operations, resulting in an increase in international trade. This has opened doors for investors all over the world, and many new investment routes and possibilities have arisen as a result. Investors take a lot of risks when interacting with and conducting business across borders. Multiple jurisdictions, rules and regulations apply to different nations. As a result, before making an overseas investment, foreign investors must consider a number of variables, one of which is insolvency laws. The Article will be discussing an overview of the Cross Border Insolvency in India.

When Jet Airways Private Limited [2]filed for insolvency at the NOORD Holland District Court, the idea began to take form. There were no provisions in the Code for deciding on foreign governance. Due to non-payment of dues to a European cargo firm, a Jet Airways aircraft was cancelled at Amsterdam, and the Jet Group was facing insolvency proceedings in both the Netherlands and India. The Dutch court administrator went to NCLT, where his plea was turned down, and he ended himself in NCLAT. NCLAT ordered Jet Airways creditors to file an affidavit of confirmation for cooperation with the Dutch Administrator, pay the Dutch Administrator’s expenditures, and extend credit to foreign lenders. This was a scenario similar to that of Indian creditors, who have the same right to file claims with the bankruptcy resolution expert monitoring the proceedings. The NCLAT has mandated that the Cross Border Protocol be submitted and agreed upon with the conditions and circumstances under which they would engage in the ongoing Insolvency process, with the exception of the Dutch Administrator’s participation in Committee of Creditors meetings.One of the most important cases to understand the need for insolvency provisions with different jurisdictions was the case of Jet Airways Pvt. Ltd.

• The insolvent firm may have a number of overseas creditors who want their rights protected even though they are not located in the country where the bankruptcy proceedings are taking place.

• An insolvent firm may have assets in another country that a creditor may seek through bankruptcy processes;

• Insolvency proceedings involving the same debtor may be started and proceed in multiple countries.

The first instance is addressed by the Insolvency and Bankruptcy Code of 2016, which makes no distinction between local and international creditors. Under Section 3(23) [3]of the Code, the phrase “person not located in India” is included in the term “person”, and therefore the definition of creditors permits overseas creditors to commence and participate in insolvency proceedings under the Code. When it comes to the allocation of assets in the case of an insolvent company’s liquidation, foreign creditors now have the same rights as domestic creditors. However, the Code still lacks a system for reciprocity, collaboration, and coordination across jurisdictions of an Indian court or tribunal seeking help from foreign courts or bankruptcy agencies where an insolvency case may have cross-national ramifications. Sections 234 [4]and 235 [5] of the Joint Parliamentary Committee’s Report were added to the Joint Parliamentary Committee’s Report to address these problems. According to Section 234 of the Code, the Central Government may engage into bilateral agreements with other governments for the purpose of upholding the Code. When a debtor’s assets are located outside India, Section 235 authorises an Indian court or tribunal to write a letter of request for assistance to a foreign court or tribunal.[6]

A Brief of The UNCITRAL Model Law

In 1997, the United Nations Commission on International Trade Law (UNCITRAL) developed the UNCITRAL Model Law on Cross Border Insolvency to address the insolvency of corporations with operations in many countries (Model Law). The Model Law came into force on the 30th of May 1997, during the UNCITRAL’s 13th session in Vienna. The Model Law has now been adopted by 44 countries as a common framework for dealing with cross-border insolvency.

The Model Law does not force implementing countries to harmonise their substantive domestic insolvency and bankruptcy laws; rather, it defines four elements to aid cross-border insolvency: access, recognition, relief (assistance), and company. Basic provisions, access of foreign representatives and creditors to a state’s courts, recognition of foreign processes and remedies, collaboration with foreign courts and foreign representatives, and mechanism for dealing with concurrent cases are the five chapters of the Model Law. The Model Law establishes a distinction between “foreign main proceedings” in which the debtor has a “centre of principal interest” and “foreign non-main proceedings” in which the debtor has a “establishment,” as well as the reasons for distinguishing the two. The Model Law also provides a public policy exception, which permits a country to decline to comply with the Model Law if it would be plainly contrary to its national interests. After adjusting the Model Law to their local situations, countries have incorporated it into their own legal systems.The UNCITRAL Model has several important features:

a) After the model law is implemented, India would become a preferred investment location for foreign creditors. The significant economic benefits include considerably faster information interchange between nations, assistance and collaboration in sustaining the organization’s assets, resulting in successful reorganisation and restructuring, and an effective credit recovery process.

b) In terms of processes for foreign businesses, this statute is significantly more precise than the IBC. Because a country can modify the model law to meet its conditions and local insolvency laws, this legislation is flexible.

c) Furthermore, if the foreign proceedings run counter to the country’s national policy, the proceedings’ validity may be called into question.

d) The UNCITRAL Model Law facilitates cooperation between courts and insolvency practitioners in both domestic and foreign jurisdictions.

The only provisions of the Bankruptcy and Bankruptcy Code that apply to cross-border insolvency are sections 234 and 235. These two sections were inserted as enabling provisions in response to the Joint Parliamentary Committee’s recommendations (Joint Committee on the Insolvency and Bankruptcy Code, 2016). International agreements are dealt with under section 234. It states that the Indian government may engage into an agreement with another country’s government to enforce the Code’s provisions. The Indian Government may decide that applying the IBC to assets of a corporate debtor or debtor domiciled in a country other than India with which reciprocal agreements have been made is subject to the IBC’s conditions (Section 234).

In some cases, Section 235 of the IBC covers letters of request to countries other than India. It states that if a resolution professional, liquidator, or bankruptcy trustee believes that the corporate debtor’s or debtor’s assets are located in a country with which reciprocal agreements have been made, he may apply to the Adjudicating Authority (the National Company Law Tribunal) under the Code for evidence or the initiation of proceedings. If the Adjudicating Body is satisfied that evidence or action regarding the overseas assets is necessary in connection with the insolvency resolution process, liquidation, or bankruptcy proceeding, it may send a letter of request to a court or a competent authority to deal with the request (IBC, Section 235). While the insertion of these two sections to the IBC is significant, there are still some concerns to be resolved. [7]

India has yet to receive the right legislative framework to oversee cross-border insolvency issues, which complicates the judiciary’s task of resolving cases involving Indian and international corporations. The framework for cross-border insolvency would strengthen the Indian financial system’s long-term stability. At the national and international levels, it would promote openness (data disclosure, fiscal and monetary policy), financial stability, and marketing integration. It would assist stakeholders in more effectively managing their financial risk and enterprise sectors, as well as ensuring efficient credit and resource allocation, hence increasing economic productivity and growth.

[3] Section 2(23) of The Insolvency and Bankruptcy Code, 2016: “person” includes — (a) an individual….and includes a person resident outside India

[4] Section 234 of the The Insolvency and Bankruptcy Code, 2016: Agreements with Foreign Countries – (1) The Central Government……………as may be specified.

[5] Section 235 of the The Insolvency and Bankruptcy Code, 2016: Letter of request to a country outside India in certain cases- (1) Notwithstanding anything contained in this code…………….to deal with such request.

This Article is authored by Parth Sindhwani, student of Jims Engineering Management Technical Campus, School of Law (Affiliated to G.G.S.I.P.U).