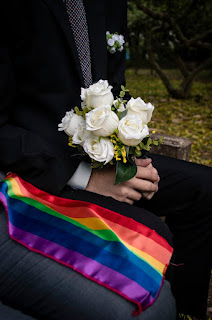 Before starting, there is a saying by Hendrik Hertzberg, “Marriage should be between a spouse and a spouse, not a gender and a gender”

The same sex marriage falls under Section 377 of the Indian Penal Code. This section makes sex or marriage with the same gender punishable in the eyes of law. But the Supreme court gave its statement and decriminalized Section 377 and made gay sex legal on September 6, 2018.

Homosexuality is a taboo in India. In Delhi High court ruling Naz Foundation vs Govt of NCT of Delhi[1], the Delhi High court on July 2009 held this mentioned provision unconstitutional and its respect to sex between same genders or consenting adults. This ruling was overturned by the Supreme court of India on 11th December, 2013. In today’s times, the attitude of people towards same sex marriage and homosexuality has changed slightly. Different organisations have come forward to decriminalise homosexuality in India. These organisations such as Naz Foundation Trust India, the National AIDS control organization, Union Health Ministry, Law commission of India, Planning Commission of India and many others have lended their support. They have worked hard to bring tolerance and social equality for the LGBTQ community lesbian, gay, bisexual and transgender people.

Recognition of same sex relationships: A boon or Ban

Same Sex Marriage is not legally recognised in our country. Not only this, even same sex couples are not offered limited rights like civil union and domestic partnership. In contrary to this, in the year 2011, The Haryana court gave its statement in favour of two women and granted legal recognition to same sex marriage which involves two women.

The marriage equality was first granted on 1st April, 2000 in Netherlands to same sex couples. This practice is performed and recognised in almost 29 countries all around the world. There are some countries where same sex marriage is not at all legal and there are laws which prevents this as a preventive measure. The recognition of same sex marriage is said to be a human right and civil right and also taken to be a political and religious issue.

There are certain issues which are faced by same sex couples or same sex parents.

The scientific literature shows that a person’s physical and psychological well being depends on the marriage and the children are benefited after being raised by both parents whether they are of same sex or mixed sex. There has been an argument that same sex marriage should be legally recognised because it will be beneficial for the children of same sex. Scientific reports have shown that lesbian and gay parents are fit as heterosexual parents. The children of same sex parents are psychologically healthy.

The option of surrogacy is there for a gay man or bisexual person. Surrogacy is a process where a woman bears a child through artificial insemination for another person or it can be that a woman carries a surgically implanted fertilized egg of another woman to birth. These arrangements for gay or bisexual may be legal but are controversial in several jurisdictions.

The state of Affairs in India

Presently, India does not have a unified marriage law and is mostly determined based on religion and culture. The only state which has a unified marriage law is in Goa. But in Indian laws, it is expressly defined that marriage is between opposite sexes. India is a country where inter caste marriage still faces wrath to be legally accepted by most parents, what more can be expected? The acceptance of same sex marriage may be a challenge to all but not an impossible one. There were two men who filed a suit in Kerala High court in 2020[3], saying that the prohibition of same sex marriage violates different constitutional provisions. There were a couple of citizens who proposed to draft a uniform civil code in 2017 which would make same sex marriage legal in India which would define a marriage of a woman with another woman, a transgender with another transgender and continues. Here any kind of gender based discrimination will be ruled out.

The faces of the Section 377 verdict Lawyers Menaka Guruswamy and Arundhati Katju stated that their next step would be to make same sex marriage legal in India. This would be a step that would take the LGBTQ rights to the new level both legally and socially.

Since generations, the LGBTQ people have struggled hard to attain their own rights as dignified individuals and the world has its fair share to let those people down. The legal recognition of the same Sex Marriage is the thing which is very much hopeful in India, is this a right to a love and isn’t love is an expression? The question arises if marriage is a bond between two people for a lifetime, then from where does gender or sexuality comes to determine this one ness? There is a wonderful line which is said my the lawyer Menaka Guruswamy quoting ,”We are not a nation that recognizes girlfriends or boyfriends or dating, we’re a nation that sanctifies one kind of relationship and that is marriage“