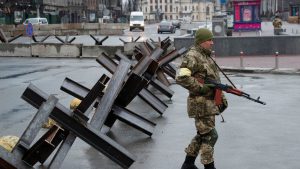 It has been seen often that countries wage war when all the diplomatic channels fail, and there is no other option to protect self-interest other than engaging in a conflict.

After the devastating effect of World War 2, governments have realised the disastrous economic implications that took place impacting the parties involved and the whole world. When the soldiers fail to protect their country, then the innocent civilians bear the consequences in the form of food crisis, rape, and forced migration, to name a few.

Mass Genocide and wiping out of community is another aspect of war leading to large scale humanitarian crisis. Same situation occurs in Ukraine failing the basic purpose of United Nations to maintain international peace and security.

Involvement of Geopolitics and Trade

Western hypocrisy and division among European countries are one of the key reasons resulting in a humanitarian crisis. It is to be noted that Russia is the third-largest supplier of Natural Gas and Europe consumes 75% of it. Moreover, Europe purchases 48% of crude oil from Russia. Thus, any sanctions on Russia hurt Europe too which could ultimately cripple its energy supplies.[1]

In 2008, Germany blocked the entry of Ukraine in NATO considering its trade relations with Russia; while other members of NATO supported the resolution. Ukraine’s repeated efforts to join NATO have been failed due to some way or the other.

Today Western countries talk about sanctions, about western solidarity. But are they walking the talk? The US imports 16% of its uranium from Russia, but their sanction does not touch Uranium, imposing a sanction on Uranium will cost US 1 billion dollar.[2]US still imports fertilizers, potash, diamond, phosphate and urea because it has been listed as vital products. As far as Russian oil is concerned during the Ukraine war, the US bought 100,000 barrels a day, which is 43% jump.[3]

The mistake that the Ukrainians have made is that they let their soil used for all kinds of geopolitical experimentation with the Western countries due to the bait of NATO. Reports of Ukraine joining NATO have rattled Russia, which took it as a serious provocation by the west to its borders.

Bucha is a city in Ukraine which was under Russian control and then later taken back by Ukrainians. Reports have been surfaced of mass grave, people with tied hands and women being brutally raped. These incidents pave the way for the international community to suspend Russia from the United Nations Human Rights Council.

Moreover, many Ukrainians have fled to neighbouring countries to protect their lives. Almost 3.7 million refugees have fled Ukraine since the escalation of conflict on 24th Feb. Among them, 374,059 have been displaced to Moldova.[4]

United Nations High Commissioner for Refugees came into action and declared Ukraine a Level 3 emergency. They are working on the ground to provide humanitarian assistance.

This conflict has appended commodity markets from oil to gas and wheat, leading to the prospects of an increase in inflationary pressure on countries trying to revive their economic growth after the pandemic. Crude oil prices continue to rise and oil companies like shell and BP are winding up their operations in Russia.

It is to be noted that Russia is the world’s third largest oil producer and second most influential member of the OPEC, plus alliance behind Saudi Arabia.

Sanctions imposed by the United States and other western countries on Russia particularly banning some Russian banks from the swift global financial payment system is expected to make it more cumbersome for many companies to do any kind of business with Russia. Europe suffers the most due to sanctions because of its huge energy purchases.

As sanction cripple Russian economy, the Russian President decided to sell Natural gas and oil with its own currency. It has also started selling crude oil at discounted rates to India to fuel his economy.

Today, the entire world is interconnected and disruption of anything from anywhere leads to disruption of the entire supply chain. Also, the transportation of oil supply and gas pipelines impact Europe as it depends on almost one-fourth of its needs. Ukraine is also a big producer of wheat, sunflower and rare earth minerals; all these situations are extremely complex for the world economy which is resulting in increased inflationary pressures.

Western sanctions have led BRICS countries to give a thought on payment mechanism. Russia emphasizes other countries to use Chinese currency Yuan for payment to its oil and gas sectors. Russia is in talks with India and China to find ways to challenge the US dollar in the future. Today, the world is moving from unipolar to multipolar, where the power has distributed among several states rather than being dominated by one.

As the war continue for over 50 days, cold war politics is also making a comeback, there are two clear power blocks on one side we have the anti-Russia camp led by the United States aided by the collective might of NATO supported by a host of democratic countries together they are painting this war as a fight between autocracy and democracy. Whereas, the pro-Russia camp Belarus, Armenia, central Asian republics also Syria, North Korea and Cuba some sworn enemy of the US. All these countries blame western hegemony and NATO expansionism for this crisis.

However, there are countries which are in neither camp and there are many such who don’t want to take sides in this war, but they’re under immense pressure to do so. On top of this pressure list is India, which share ties with both camps.

The world is trying hard to pressure India to condemn the Russian invasion of Ukraine. But, so far, it’s been firm in exercising its strategic autonomy on at least three occasions. India has abstained from voting on resolutions condemning Russia; first at United Nations Security Council, UN general Assembly and again at UN human rights council. On every occasion, India called for an immediate ceasefire, stressed on peaceful co-existence and urged for diplomatic talks.

Undoubtedly, India’s national interest also lies with Russia as Russia is its biggest defence partner and time-tested strategic ally. But unintendedly, India’s abstentions have upset the west the most, as they say, India has chosen the aggressors’ side. New Delhi says it has only acted in National Interest as its priority was to evacuate its citizens 20,000 of them from Ukraine, mostly students, and the speed at which this crisis unfolded made evacuation an enormous challenge. It could not risk the safety of its citizens, it needed security assurances from both sides to evacuate its people.

Evacuation plan worked only because India kept its lines of communication with Russia open.

India has two hostile nuclear-armed neighbours. If India sides with the US, then it will push Russia further into China’s embrace and that’s the last thing we want.

It took a campaign led by western countries into play; one to condemn Russia and then suspend it from various international organisations. Such actions will only drift away from the main purpose of the Ukrainian President to hold direct talks of President Vladimir Putin.

Voting against Russia will not stop the war, but arbitration and mediation will. Today, India is sitting on the fence and has the privilege of creating an atmosphere to mediate with both the parties.