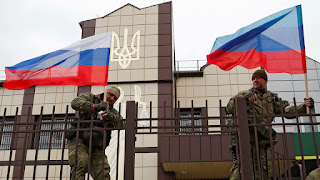 The long ‘fraternal squabble’ between two European neighbours cascaded into a global glare sooner than expected in the early hours of February 24, 2022, when Vladimir Putin’s Russia in the context of a ‘special military operation’ infiltrated the border of its sovereign neighbouring country, Ukraine. This brazen action has been described by many an analyst as an ‘unprovoked invasion’ of a sovereign country – Ukraine, which is Europe’s second largest country.[1]Orchestrating the largest armed conflict on the European Continent since World War II, Russian President, Vladimir Putin, has come under intense political pressure, economic sanctions and opprobrium from Western superpowers and many other countries across the globe.

Despite the punitive measures meted on Russia by the Western powers – majorly NATO countries and allies – to frustrate the war adventure, the Russian armed forces still continue its ghastly escapades into Ukrainian cities with deadly shelling and infrastructural destruction, mapping into Kyiv. Virtually a month into the invasion, expert studies show that nearly 7 million Ukrainians have been displaced, while over 40,000 military and civilian casualties have been recorded.[2]In the face of severe economic backlashes on the war instigator – Russia, the invasion still presses on. The question that boils for answer is – what role does the law play in this armed conflict? Also, what does international law have to do with the war in Ukraine? Is there a remedy to this human tragedy that can be proffered with the aid of the law? This article does succinctly examine Russia’s invasion under the lenses of international ­­­law.

Relating International Law to the War

International law is an aspect of law that is concerned with regulating the affairs and relations of states, while delineating their rights and responsibilities. TheUnited Nations Charter comes in handy in this respect. This kind of international constitution was devised to avert any form of war. Article 2(4) of the Charter provides that the “All Members shall refrain in their international relations from the threat or use of force against the territorial integrity or political independence of any state”. The exception to this provision is in cases where force is used as a last resort right of self-defence or used to maintain order and restore peace by the UN Security Council.

Russia, unlike as expressed in President Putin’s speech on the eve of the invasion, cannot rightly term the invasion as an act of self-defence. Russia has contended that its military operation was intended to protect itself and Ukraine’s Donbas Region, which is pro-Russia, from blitz by Ukraine and NATO. Incontestably however, no such assault has been made by those alleged. Thus, self-defence does not avail the accuser in this sense. That is, the invasion remains a flagrant breach of Article 2(4) and does not come under the manifest exceptions thereto.

In international law, judicial mechanisms are quite germane. The International Court of Justice (ICJ) – the judicial arm of the UN – is vested with the jurisdiction to hear matters that deal with disputes between states, or cases of breach of international instruments or conventions by member states. Similarly, on March 16, 2022, the ICJ delivered its order on the request for the indication of provisional measures submitted by Ukraine in the case concerning allegations of genocide under the Convention on the Prevention and Punishment of the Crime of Genocide against the Russian Government. The order is though laudable; however, it is quite infelicitous that it would neither have binding force nor be enforceable due to the singular reason of the offender’s veto power. The veto prerogative of Russia as a permanent member of the UN Security Council would consequently render the decision of the judicial body to be ineffectual.

The question of what international law has to do with NATO in this European crisis is still hotly debated. NATO, founded on a 1949 treaty, has expanded its membership to the Eastern Flank of Europe by admitting membership of former Soviet countries, contrary to a contestable agreement with the defunct USSR in the 1990s. Russia’s demands for Ukraine’s non-membership of NATO have been constantly ignored by the western powers.  This especially has spurred the Russian invasion and made the Kremlin to cite its national security interests among the rationales for its ‘special military operation’. Russia’s government has also argued that US-NATO military operations in Kosovo, Iraq and Libya are not different from its operation in Ukraine. All of these are political instigations which in the international law fora have not been analytically addressed but left with lacunae.

Based on the foregoing, one is inclined to conclude that international law has proven to be generally ineffective when it comes to checking great powers’ actions. The wrath of the breach of international law is not felt by powerful nations. Russia – as a superpower – does not seem to have regard for international law as the human carnage rages on in Ukraine. One may thus conclude that international law has little or zero impact in this war. As thus, Russia’s foes – Western powers – are also not resorting to the potency of international law to address this gunboat diplomacy. Rather, they resort to economic battle with the Kremlin, and supplying the victim, Ukraine, with modern warfare to aid its defence against the invading force. Nonetheless, international law is not totally irrelevant in the face of this crisis because countries that are condemning Russia’s actions are defending the international law principle that “relations between states should be shaped by legal principles rather than merely the balance of power”.[3] Be that as it may, one may be assured that the in a 21st century civilization, the world is not going back into the dark days when war was regarded as “an accepted tool of continuation of politics”.[4]

Authored By: Israel Adekunle Adeniyi, a fourth-year student of the Department of Common Law, Faculty of Law, University of Ilorin, Nigeria.