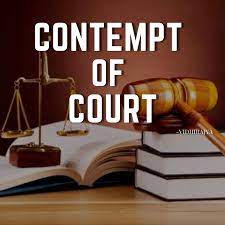 I attempted to examine and evaluate the origins of the notion of contempt of court in my research work. This article will discuss all aspects of this notion, including constitutional requirements and legal interpretations. This report also sheds insight on a number of important court decisions involving the topic of contempt of court. With the highest respect for the judicial systemthis research paper will focus on a thorough examination of the notion of contempt of court. The primary goal of this notion is to safeguard the administration of justice. In both criminal and civil situations, justice must be served.

As stated in the case of Brown vs. Allen, this famous comment was made by an American Attorney Judge of the United States Supreme Court.[1]The question here is whether a layperson who is not a member of the bench can ever make a proclamation that calls into doubt the reliability of any court, with the exception of the Supreme Court of the United States.[2]In our modern period, everyone who is found in contempt of court faces humiliation behind prison. When we look at the unclear wording defining the scope of contempt law, we see this difficult position.In layman’s terms, contempt is any purposeful disobedience to or disregard for a court order, as well as any misconduct in court.[3]

As we all know, the court has its own autonomous position and is one of the pillars of democracy, instilling in citizens a sense of faith in the omnipotence of justice by punishing the guilty. As a result, anyone who attempts to obstruct any court system or process is considered a criminal in the eyes of the law.

India’s constitutional design is based on the rule of law scheme. This means that the law has precedence over a person’s individual and collective responsibilities. The idea behind contempt of court is that citizens are obligated to obey the court’s decision, which is intended to aid in the administration of justice. In this sense, we can state that the primary motivation for contempt of court is to secure justice.

There are two types of Contempt of Court:

Civil contempt of court[4] is defined as “willful disobedience to any judgment, decree, direction, order, writ, or other process of a court or willful breach of an undertaking given to a court[5],” whereas criminal contempt of court is defined as “the publication (whether by words, spoken or written, or by signs, or by visible representation, or otherwise) of any matter or the doing of any other act whatsoever which:

(ii) Prejudices, or interferes or tends to interfere with the due course of any judicial proceeding,

(iii) Interferes or tends to interfere with, or obstructs or tends to obstruct, the administration of justice in any other manner.”

Punishment for contempt of court has a long history dating back to the 13th century. It was intended to protect the fairness process’ integrity by barring unjustified interference in the administration of justice, whether directed at judges, witnesses, or others. This contempt of court authority was formed by kings[6], who felt it was a logical extension of their settling function.The law imbues a person with discipline while adjudicating, preserving the dignity of the administration of justice.

ORIGIN OF THE CONCEPT IN INTERNATIONAL LEVEL

Before I go into the country’s foreign viewpoints on contempt of court, let me first explain their legal standing under international law[7]. The International Covenant on Civil and Political Rights (ICCPR), the European Convention on Human Rights (ECHR), the American Convention on Human Rights (ACHR),[8] and the African Charter on Human and Peoples’ Rights (ACHR) they all provide safeguards for both freedom of expression and the administration of justice.

The approach to contempt of court in common law jurisdictions is by sub judice rule, which means that a person is banned from interfering with the proceedings while they are underway and through all stages of appeal until the case is solved between the parties. The Contempt of Court Act, 1981 governs this system in the United Kingdom, and it is regarded as a serious criminal offence[9].This Act was enacted in reaction to the European Court of Human Rights’ decision in the case of Sunday Times v. United Kingdom, in which an injunction was granted to prevent the newspaper from commenting because it might jeopardize current settlement discussions. There is no comparable contempt of court statute in Australia or New Zealand, where the English common law test still applies, posing a lower danger on a person. The High Court of Austria indicated something different in Glennon, saying that contempt of court is based entirely or substantially on proof that the publication has a definite intention to interfere in practical reality. When it comes to the administration of justice In the United States, there is a distinction in the courts’ ability to punish for contempt. The number of books that can be published is quite limited.

The term “contempt of court” is derived from English law. When the British ruled India, the three High Courts of Calcutta, Bombay, and Madras had the inherent right to punish for contempt under the Indian High Courts Act of 1861.

Following that, the Act of 1926 was repealed and replaced by the Contempt of Courts Act of 1952, which defined the jurisdiction of the High Court, which was not included by the earlier Act of 1926. Chief Courts were created as a result of this law. It also has the authority to try and punish those who disobey it.

After a protracted struggle for independence, a Bill was tabled in the LokSabha on April 1, 1960, to modify the current statute of contempt of court, which was vague, imprecise, and unsatisfactory. In 1961, the government formed a special committee called the Sanyal Committee, which was led by Shri H.N. Sanyal and charged with scrutinizing the law and studying the bill (Additional Solicitor General of India).In 1963, the committee issued a report that described the restricted powers of some courts in punishing for contempt of court, mentioning criminal contempt and recommended the “process (to be followed) in case of criminal contempt of court.” After extensive consultation with all states and union territories, the Committee’s suggestion was accepted by the government.The bill was then investigated by the Houses of Parliament’s Joint Select Committee, which recommended a few revisions to the bill, including a revision to the statute of limitations for going to prison for the purpose of contempt proceedings The 1971 Contempt of Courts Act (70 of 1971) was enacted to replace the previous one. Act passed in 1952. The Act of 1952 divides judicial contempt into two categories: civil contempt and criminal contempt.

In this case, the Supreme Court looked at Section 2(b) of the Contempt of Courts Act, 1971, which defines civil contempt. It was determined that the term “Willful” means an act or omission that is done voluntarily, intentionally, and with the specific intent to do something the law prohibits, that is, with the bad intention to disobey or deregulate the law and all these case must be adjudicated according to the facts and circumstances of each case.

The case concerned the intrusion of a third party who brought certain information to the court’s attention, which was considered contempt of court. The Supreme Court ruled in this case that anyone who files a contempt petition with the court would be held in contempt. The court will provide the information, but only if you request it.

Last but not least, when it comes to the administration of justice, there are only two parties involved: the court and the contemnor.

Legal Remembrancer vs. Motilal Ghose, a case heard in the Calcutta High Court, and Vijay Pratap Singh vs. Ajit Prasad, a case heard in the Allahabad High Court, are two previous cases that dealt with the problem of contempt of court. In both of these cases, the difference between civil and criminal contempt was examined.In Vijay Pratap Singh Vs. Ajit Prasad[13], it was stated that in civil contempt cases, the goal is to make right the wrongs committed by the person in contempt of court, and to do so, sanctions are imposed, whereas in criminal contempt cases, the goal is to punish the person who has dishonored the court by his actions and has proven to be a hindrance in the justice.

Criticism is a significant component of the world’s modernistic societies, particularly in those regions of the world where citizens have the right to freedom of speech and expression and when the judiciary is not the sole source of this right. Justice, on the other hand, should be kept out of that realm.It is stated in Section 5 of the Act that legitimate criticism of judicial acts is not contempt, and that a person will not be held liable for making any fair and reasonable comment on the merits of a matter that has already been heard and determined. The only thing that people need be concerned about is that the criticism that is published is fair and does not contain malicious charges, as this would be the citizens’ power of criticism, which has been abused. Criticizing the court, judicial acts, or judges, in its purest form, will only result in more of the same. There is room for improvement on the inside, and it will be critical for the public’s investment of faith and conviction in the courts.

The judiciary and judicial processes serve the public interest by working toward the objective of providing fair and equitable justice to all, which shows a larger picture of our society’s well-being and soundness. Being a stumbling block in that process not only puts the suspect in danger, but it also takes away someone’s chance at justice.Criticizing the judiciary on its merits and in good faith, on the other hand, is an imperative requirement that should be supported and encouraged since it permits citizens who are not part of the judicial apparatus to keep a check on the judiciary’s exercise of power. It is not something to turn a blind eye to and believe anything that comes out of any source,be it the judiciary as well is not something which is expected out of vigilant citizens. As law-abiding citizens, it is our responsibility to assist in maintaining the dignity of the courts, while also reserving our rights to reasonable criticism of the judiciary as needed.

[7]The Historical Perspective Of The Contempt Of Courts In India And Abroad, Shodhganga