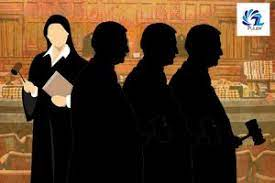 The gender ratio in India is around 48%. Even after being the second most populous country in the world and with such gender ratio; Women barely constitute 7 percent of the total sanctioned strength of judges in all the 25 high courts across the country[1].  Out of around 1080 judges in all the 25 High courts around the world only 80 are women and rest are all male. Interestingly, there is no woman judge in the Patna, Meghalaya, Manipur, Tripura and Uttarakhand high courts. These numbers are abysmal. Even after 75 years of independence, the number of female judges working at the top judicial courts is definitely low. Today out of 34 judges only 4 are female in the Supreme Court of India i.e. Justices Indira Banerjee, Hima Kohli, BV Nagarathna and Bela M Trivedi.

Why we don’t have equal representation of women?

When it comes to equal representation of woman in judiciary, the number is very low as discussed above. There are social and psychological factors behind the same. Our society is patriarchal in spirit and women are supposed to take care of the household and are believed to be naive and emotional. Times changed and women started working in each and every domain, but the mentality did not change. In an interview senior Supreme Court advocate Meenakshi Arora talks about her personal experience as a female advocate. She mentioned that once a woman has reached the top levels in the profession, she has to work even harder to avoid any slip up. “One small mistake, and the males in the profession immediately turn around and say, ‘ye to aurat hai [she is a woman, after all”. [2]

It is also presumed that women are soft spoken and are not aggressive in nature but when they show anger, they are being called by names. Former Delhi High Court Chief Justice A.P. Shah recalls having once recommended a woman lawyer as a judge, but she was rejected apparently because she was ‘rude’. “If a male lawyer replies in a certain manner to a judge, it is usually taken in the stride. But if the same things were to be said by a woman, it becomes a topic of discussion for the bar or bench, and not in a pleasant way,” he says.[3]

Senior advocate Indira Jaising observes, “There is a live and kicking patriarchy that prevents women from breaking the glass ceiling. The entrenched ‘old boys’ club mentality makes it harder for women to lobby for judicial posts”[4]

Gyan Sudha Misra J. in an interview said, “I guess lack of faith and belief in the abilities of women is still rooted in society and more so in the male psyche and we prefer to have their token presence, especially in the higher judiciary, more for the sake of symbol rather than their equal participation”[5]

Why we need more female judges?

Article 217 and 124 of the Constitution of India, deals with the appointment of judges at High Court and Supreme Court respectively.  These provisions do not discriminate on the basis of caste, creed, domicile or gender of the judges to be appointed. But from time to time, the Government of India and the Supreme Court itself have been insisting on giving weight age and consideration to deserving candidates among women also, while making recommendations for the appointment as judges[6].

Justice Indu Malhotra in her farewell speech addressed this issue by stating that “society benefits when gender diversity is found on the bench”. [7]Equal representation of women at high judicial levels reflects the sense of justice and equilibrium among the judges. When parties see equal representation of women in a court, it gives them a sense of confidence; it also enhances the legitimacy of the courts.

Victims, especially of sexual harassment feel more confident when there are good numbers of female judges at the bench as it is believed that female judges would be more empathetic towards such victims. These things improve the quality of judgment passed by the courts. In a case related to sexual harassment, Madhya Pradesh High Court asked a 26-year-old man, accused of molesting a woman, to get a ‘rakhi’ tied by her on the day of Raksha Bandhan.[8] Senior advocate of Supreme Court, Aparna Bhat and eight other women advocates filed a Special Leave Petition against this judgement. Supreme Court quashed the judgement and issued certain guidelines for the lower courts. Such judgements are really concerning as it reminds us the need of more female judges. Although the mere presence of female judges does not guarantee justice but the callousness and lack of empathy depicted in the judgements like the one above could significantly reduce.

According to Advocate Nappinai, the presence of more women as judges is important not because they are more empathetic compared to men. “Empathy is gender neutral,” she said. She wants to have equal representation of women because she wants women judges to be less apologetic. She said, “Their conduct appears to indicate that they are probably being more cautious and more fearful merely because they are women.”[9]

Judge Vanessa Ruiz, mentioned that “we do, after all, live our lives as women, with all the social and cultural impacts women face, including complex family relationships and obligations. Women judges bring those lived experiences to their judicial actions, experiences that tend toward a more comprehensive and empathetic perspective- one that encompasses not only the legal basis for judicial action, but also awareness of consequences on the people affected”.[10]

Present scenario and a way forward

The appointment of a female Chief Justice of India (CJI) is a matter of debate right now. Justice B.V. Nagarathna, is in the line to become the first female CJI in 2027 for around 36 days. But here the question arises, would the appointment of a female CJI, suffice the purpose. Simply inducting a woman CJI would not absolve the judiciary from the responsibility and accountability it holds. Reorientation and ground- level changes are required to convert the rosy picture into reality. We should bear in mind that seeing the first Woman Chief Justice would be an overwhelming moment for India. But this should be treated as a beginning to see changes that must be brought and not as the final goal. [11]

Recently Chief Justice of India Justice NV Ramana stated that after years of suppression, equality is the right of women and it is not mere a charity. CJI supported 50% reservation of women in judiciary and in law schools. “There is a need to strongly recommend supporting the demand for some percentage reservation in all law schools in the country,” CJI NV Ramana said while addressing the women lawyers of the Supreme Court.[12] If such reservation is provided, it would definitely help to improve the female representation at judicial level.

Proper laws should be made for the protection of female judges and advocates; which would ensure their safety and protect their dignity in court rooms. Certain steps should be taken to enhance the partition of women in judiciary and for that incentives should be given to female judges. Frequent transfer of female judges should be avoided so that they can continue with their work without any hesitation.

Moreover the perspective regarding women should be changed because without that any effort made by the government would be just be on papers. People should understand that female lawyers and judges are no less capable than their male counterparts. It can be seen that major judgements passed by the Supreme Court had female judges in its bench, who gave their equal contribution towards the development of laws.

These small steps would make a big difference in the society and would result into overall upliftment of women in India.