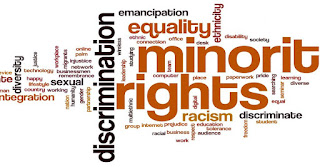 Minority are literally the group of peoples whose practises, religion, ethnicity or other attributes are smaller in number as compared to the main groups of those classification. According to the definition given by the United Nations, these are the groups which are socially, politically and economically non- dominant and inferior in population are minorities. However in our Indian Constitution, this term is only used in Article 29 and 30, nor any other effort was made to define it. It was all left to the legislation and judiciary to determine the terms which constituted minorities and parliament found Sikhs, Buddhists, Parsis, Jain, Chrisitians and Muslims as the splinter group in India, while these majority groups are in fact in majority in few states on the basis of the 2011 census. If we glimpses our views on the case of T.M.A. Foundation vs State of Karnataka[1] in which it was held that:

But there are various states in the countries where Hindus are in minority and these include- Arunachal Pradesh, Punjab, Nagaland, Jammu & Kashmir, Lakshadweep, Mizoram, Meghalaya and Manipur and because of that they are not among the beneficiaries of scholarships granted by Union Government in the field of technical education. If we take the instance of Jammu and Kashmir, the percentage of population of Hindu’s is 28.44% and Muslims are 68% of the total number of population yet they are allotted 717 out of  753 scholarships, and this is only the one instance of minority groups.[2] The reasonable share of Hindu’s is being exhausted superciliously to uncertified sections of the country’s population, and this is only because of non- identification and non- notification of splinter groups at state level. In general this is the only duty of the government to become the safeguard of the rights of linguistic and religious minorities and identify them at state level.

They were the religious minorities who forefront the minority rights concerns onto the regional and now, on international level. In India people ardently be convinced with their respective religions and an enormous number of all coterie give equal respect to the religion of other peoples. Of course it goes without saying that the Indian State has no religion of its own, nor for that matter can any religion claim superiority over another religion as by resorting to the false premise that any religion in the country is indigenous while others are foreign. This is dissension which is not sanctioned by our Indian Constitution, which gives uniform approbation to all the religions accomplished by various sections of our society. This is also said by the Supreme Court of India that the notion of secularism is that the State will have no religion of its own. It was the old tradition of India to be tolerant to all faiths and forms of worship and this is the only reason why India is the home to all the 72 “firqas” (sects) of Muslims which no other country has.[3]

This is useless to say that Muslims are minorities in India and it is also in vain to say that these minorities are not getting rights in India. In fact, India is the country with the third largest population of Muslims in all over the world after Indonesia and Pakistan[4]. If we compare the present population of muslims with the 1951 Census when India had 9.8% of Muslims and Pakistan had 1.3% of Hindu population and in the present time Pakistan has 1.85% Hindus in their country and India has 17.2% of Muslims population. But even after all of that, few Muslims are misusing their minority rights by giving hate speeches [15 crore Muslims can dominate over 100 crores of Hindus- Waris Pathan in Karnataka] against Hindus and provoking Muslims which led to the religious conflicts and riots in the Country[5], since then they got the clean chit from the court. Now the question arises: what are the remaining rights they do not have even now. They are enjoying their freedom of speech, freedom of life etc. but in spite of that they are raising the slogans of their minority statuses in India.

Are Sikhs a minority in Punjab?

This question was arisen in front of Punjab & Haryana High Court in the case of Sahil Mittal vs State of Punjab,in which the petitioner contended that opposingly of minority status Sikhs are in Majority in Punjab and they are also holding political and influential powers and position in the society hence they are not auxiliary group in Punjab.Now, there was no cornerstone for holding them as a minority group in Punjab. Respondents argued that in Punjab there are so many communities which are known to be Sikhs but are not originally Sikhs in a strict sense. But in this case the High Court held that:

The purpose behind giving some special rights to some specific religious or linguistic groups is not to give them a kind of privilege or pampered section of the population but the only reason is to give these minorities a feeling of security and confidence.[7]The main goal is to bring these minority groups on the same platform so that the purpose of Article 14 guaranteed under Indian Constitution or the goal of equality is not being ignored.[8]However this case is still pending in the Supreme court but it is now precise and clear that Sikhs are not the minority groups in Punjab and as per the T.M.A. Foundation Case the status of minority to a particular group was to be given on the basis of the condition of  these groups in the particular state but not only on the basis of their country’s population.

The Conundrum behind the Jain Community

This was contested in the case of Bal Patil vs Union of India that whether the status of Jains can be declared as minority or not under the section 2(c) of the National Commission of Minorities Act, 1992. From the Central government it was argued that this is the decision of the state government’s court to declare Jains as minority or not after the T.M.A Pai case. In this case it was observed that:

“Before the Central Government takes decision on claims of Jains as a ‘minority’ under section 2(c) of the Act, the identification has to be done on a state basis. The power of the Central Government has to be exercised not merely on the advice and recommendation of the Commission but on consideration of the social, cultural and religious conditions of the Jain community in each state. Statistical data produced to show that a community is numerically a minority cannot be the sole criterion.”

It was also said by the court that the members of the Community of Jains are affluent business mens and industrialists and they all belonged to the property class of the society which do not need the protection provided by the constitution for minorities. As these are the perks which are made to give protection and preservation to the minorities not to give them the supplementary benefits which can create inequality in the society.[9]

After reading all the entire facts and issues related to the minorities of Jains, Muslims and Sikhs, now we can conclude that the proclamation of minority group is on national level is not in conformity to the equality principle as guaranteed in our Indian Constitution. However there arises the one question in my mind that if any person of a particular community has minority status in a certain state then if he or she is budgeted towards Mumbai and settled there, then will its minority status remain with him or not. Therefore to counter this state of affair one can say that the status of SC gets changed when a SC moves from Uttar Pradesh to Rajasthan or for that matter in any states where SCs and STs are different. In fact the identification of religious minorities is being changed day by day, this is because there are various institutes in India that are opened to serve the minority groups of the country but they are not serving their main interests, especially of those of socially and economically underprivileged sections. They are admitting students not on the basis of merit or minority recognition but on the basis of their money power which fastens the process of serving the interest of the economic minority rather than the religious or linguistic minorities. So India is in great need to serve the purpose of our Constitution by giving equal status to every citizen of our country.

[5] OpIndia Staff, We will Snatch away our Azadi: Waris pathan in Karnataka, 20, Feb 2020.https://www.opindia.com/2020/02/aimim-asaduddin-owaisi-hate-speech-inciting-violence-communal-hatred-anti-caa-protests-muslims/amp/

[7] Th Ahmedabad St. Xavier’s college Society and another vs State of Gujarat and another

[8] Islamic Academy of Education and another vs State of Karnataka and others.