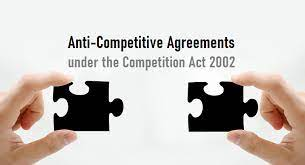 Competition is a complex terminology which does not lend itself to easy summary or concise clarification. The World Bank and OCED in its report ‘A framework for the design and implementation of competition law and policy’ defines competition as “a situation in a market in which firms or sellers independently strive for the buyers’ patronage in order to achieve a particular business objective, for example, profits, sales or market share.”

Competition is a universally acknowledged phenomenon in an economy. This allows the consumers to have same product at competitive prices. It promotes allocative and productive efficiency. Hence it is necessary to maintain and regulate a healthy competition in the market where no individual player has a dominant position. In India, Competition Act, 2002 came into force on 31 March 2003 with the aim to regulate the competition in market and protect the interests of consumers and other trade participants.

The primary objective of Competition Act is to prevent anti-competitive agreements to ensure free and fair trade in an economy.

Adam Smith once mentioned about anti-competitive agreements as “People of the same trade seldom meet together, even for merriment and diversion, but the conversation ends in a conspiracy against the public or in some contrivance to raise prices”. Such types of agreements are against competition and are hence prohibited under Section 3 of the Competition Act, 2002.

Section 3(1) of competition states that “No enterprise or association of enterprises or person or association of persons shall enter into any agreement in respect of production, supply, distribution, storage, acquisition or control of goods or provision of services, which causes or is likely to cause an appreciable adverse effect on competition within India”.Such agreements are considered as void as per Section 3(2) of the Act.

The following types of agreements entered between above mentioned parties are anti-competitive agreements;

1.      Agreements that directly or indirectly determines sale or purchase price

2.      Agreements which directly or indirectly result into big rigging or collusive bidding

Bid rigging means, “any agreement, between enterprises or persons referred to in sub-section (3) engaged in identical or similar production or trading of goods or provision of services, which has the effect of eliminating or reducing competition for bids or adversely affecting or manipulating the process for bidding.”[1]

4.      Agreement to share market or source of production or number of consumers, provisions or any other way

The factors for determining the appreciably adverse effects on competition are listed Section 19(3) of the Act;

1.      Creation of high barriers for new entrants in the market. For example, charging of high licence fee charged by patent holder

2.      Driving the existing competitors out of market

3.      Foreclosure of competition by hindering entry into the market

5.      Improvement in production or distribution of goods or services

6.      Promotion of technical, scientific and economic development utilizing production or distribution of goods or provision of services.

1.      Tie-in agreements – the agreement in which a consumer is required to purchase a good as a condition to purchase some other goods. In Sonam Sharma v. Apple & Ors, Competition Commission of India (CCI) listed out conditions which should be there to proof that the agreement is tie-in in nature.

a.       There must be two products that seller can tie together

c.       The seller must have an economic power in tying market for the tying product that it can force the buyer to purchase the tied product.

d.      The tie-in agreement must affect a substantial portion of market. [2]

3.      Exclusive distribution agreement- when parties agree to limit, restrict, or withhold the output or supply of any goods or allocate any area or market for the disposal or sale of the good. It also means that there is a single distributor for a territory.

4.      Refusal to deal- Any agreement that restricts or is likely to restrict any person or class of persons, by any method, to or from whom the goods can be sold or brought.[4]In, DGIR v. Titan industries(2001) [5]there was a clause in an agreement of Titan Industries with a franchisee that the latter will not deal in products of a similar nature for a period of 3 years within radius of 5 Kms from showroom, from the date of determination of agreement, was held to be a restrictive trade practice. [6]

5.      Resale price maintenance- Includes any agreement to sell goods on condition that the prices to be charged on the resale by the purchaser shall be the prices stipulated by the seller unless it is clearly stated that prices lower than those prices may be charged. [7]

In all the above cases the onus of proof is on the defendant.

If after the investigation, it is found that the case falls under Section 3 of Competition Act, the Competition Commission of India can pass the following orders;

1.      CCI can direct the enterprises or individuals, who are part of the agreement to discontinue the same and re-enter into a fresh agreement

2.      CCI can direct the individuals or the enterprise to modify the agreement as per the directions of the commission.

3.       CCI can also impose penalties on such individuals if it deems fit. Such penalty shall not exceed ten percent of the average turnover for the preceding three financial years. (Section 27)

4.      In case the agreement or related to cartel then such fine or penalty shall be applied to each maker, supplier, dealer, broker or service provider involved in that cartel and the amount of the penalty may be extended by up to three times its profit for each year of continuation of the arrangement, or by up to ten per cent, whichever is greater.

5.      Payment of cost and issuing of directions to the enterprise to comply with the orders.

There are certain loopholes in the Act regarding anti-competitive agreements which needs attention.

1.      The Act is silent on the issue that what could be the proceedings against enterprises which are situated outside India but are making an adverse impact on Indian market.

2.      In the changing world of internet there are many e-commerce companies. Provisions related to the same should also be incorporated in the Act.

3.      Anti-competitive components in legislations like Patent Act should stand reduced under the Act.