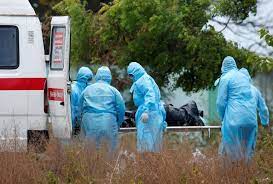 “Death must be so beautiful. To lie in the soft brown earth, with the grasses waving above one’s head, and listen to silence. To have no yesterday and no tomorrow. To forget time, to forget life, to be at peace.”- Oscar Wilde[1]

India is well-known for its diversity and land of multiple tolerance towards different paths of religion. The 42nd Amendment of 1975 added the ‘secular’ to the Preamble of the Indian Constitution, with reference to the case of Indra v. Rajnarayan 1975[2] where the Supreme Court emphasised ‘that state shall have no religion of its own and all persons of the country shall be equally entitled to the freedom of their conscience and have the right freely to profess, practice and have the right to freely profess, practice and propagate any religion. Being secular country multiple religions are followed and practised, and in every religion after the demise of a person certain age-old ritual or custom is being practised to depart the soul in peaceful way. So, for example: Hindu religion has its huge practice of AsthiVisarjan mainly a typical tolerance and adherence is observed for specific days, in which the remaining ashes and few scattered bones are collected then dipped in the Holy river Ganga. Covid-19 broke out world-wide making matters worse which resulted in the huge thrown away of dead bodies in the water bodies like rivers especially Ganga, only because of the terror of getting infected by corona disease. This abnormal behaviour of the people is been force the NHRC (National Human Rights Commission) to take major steps and adhered to bring out solutions.[3]

ARTICLE 21 and its Ambit covering Right to Decent Burial:

Article 21 of the Indian Constitution lays down, “No person shall be deprived of his life or personal liberty except according to a procedure established by law”. In the case of Francis Coralie Mulin v. The Administrator (1981)[4], Justice P. Bhagwati emphasised that Article 21 ‘embodies a constitutional value of supreme importance in a democratic society’. In addition to this Justice Iyer gave a unique interpretation to Article 21 by laying as ‘the procedural Magna Carta protective of life and liberty’. Article 21 has two elements of right to life and right to personal liberty. Hence, Article 21 is the valve of the Indian Constitution. It is the most authentic and original form of evolving according to the changing environment. [5]Right to Privacy of Dignity and Fair treatment, The Right to Decent Burial, and many other encompassing rights.

Article 21 not guarantees numerous rights to a person but also assures rights even after death too. The Right of Cremation with Proper Respect and Dignity has been added to Article 21 by the revision of different High Courts of India under the umbrella of Article 21, so that there can proper respect to be paid to the departing soul and not of throwing away the dead bodies in a mad manner. This can be referred to the cases of:[6]

1.     Kharaksingh V. Uttar Pradesh (1962),[7]here in this case Article 21 was extended by including Right to Life with Human Dignity.

2.     Common Cause (registered society) v. Union of India,[8]Article 21 has been vested with rights of people so in this case it was proposed that there should be right even after death which stands as that after death the person is to be buried in a dignified manner.

3.     AshrayAdhikarAbhivan v. Union of India[9], in this case Right to Decent Burial has been recognised as the most key factor that the respect and uprightness should well-protected and upheld.

It is also on the part of the Government to preserve and conserve the rights and integrity of the departed soul, if any infringement or mishap practised with the dead bodies that should strictly looked upon State firm actions should be taken into it.

The break out of covid-19 has led to the severe disasters in the whole world, and this has generally made people to have in an insane manner. The dead bodies infected with corona were disposed in a crooked way like throwing into the rivers or dumping them anyhow, severe violation of the Article 21 has been caused dishonouring people after their death is basically the infringement of rights. Owing to such circumstances the government and WHO (World Health Organisation) clarified that the virus cannot spread from dead bodies. There are recent judicial decisions delivered in relation to the Right to Decent burial:

1.      Pradeep Gandhy v. State of  Maharashtra[10], a petition was filed in Bombay demanding the creation of separation ground for the proper disposal of the dead bodies during the pandemic of corona, the High Court dismissed the petition and said that due to the crisis people died out of the infection would not be provided with such benefits otherwise they would have been. The Madras High Court in the case of High Court on its own motion v. State of Maharashtra, cautioned and command the locals for not disposing the bodies properly.

2.      Vineet Ruia v. the Principal Secretary, MOHFW, Govt. of West Bengal[11], the Calcutta High Court urged that Article 21 of the Indian constitution is applicable to both living people and dead bodies too. “ Even in death, human bodies are not being treated with the dignity they deserve”

1.      Section 297- Article 21 grants rights to the departed person too which also protects them from trespass committed on burial sites. This may led to imprisonment provided accordingly, which may be of one year extension as per the description mentioned of, fine may be also imposed or it can be both.

2.      Section 404- If there is any fraud conducted in the property matters of the demised one during the period of his/her death then the imprisonment may extend to three years along with fine.

3.      Section 499- This section generally deals with the defamation case. If anything spoken, written, signed, published or imputation made against a deceased person then the imprisonment may extend to two years with fine.

4.      Section 503- It is engaged with Criminal intimidation. If any person tries to coerce to destroy the reputation or property of any deceased person, the imprisonment may extend to two years with fine.

THOTA (The Transplantation of Human Organs and Tissues Act of 1994)- This Act generally protects the deceased persons organs from being getting transplanted or corrupted without the prior permission.

1.      The fourth Geneva Convention 1949 (GCIV) in which Article 16 para 2 lays down as that effective action is to be taken mandatorily if any mishap conduct is practised with deceased people. Article 130(1) ensures that it is the utmost duty of the States to look into the graves of the demised ones to take care of it, maintenance and other needs.

2.      Cairo Declaration of Human Rights in Islam, 1990- Article 3(a) emphasises that in case of armed conflict disfiguring of dead bodies are strictly not to be entertained.

3.      UN Commission on Human Rights in 2005, declared that there should be a proper etiquette to be developed while handling dead bodies it should be marked with utter respect and dignity.

Irrespective world-wide large diversity with thousands of religious beliefs practised treating the departed soul with dignity is very common with them. But in the pandemic out of fear many mishandlings with deceased has been practised at large. This would eradicated with the help of proper administration rules and guidelines. The government need to do the necessary to prevent inappropriate disposal of the bodies in rivers by providing all the needed amenities.Let’s adhere to Oscar Wilde’s quote, let the death be so beautiful, let’s make a collective effort to protect their fundamental Right, let’s not deny the Right to a decent burial.

“This blog is authorized by SWAGATIKA BEHERA, student of KIIT UNIVERSITY”