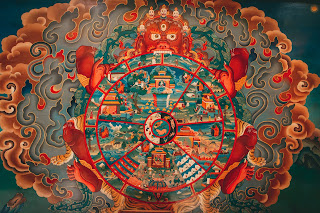 Conceptions of Hindu Law talks about different aspects of Hindu dharma in accordance with the time frame as well as the development and growth of dharma and law in the hindu society of India. It explains how and from where we get the concept of dharma and how we adopted this term in our modern society law. For best supporting tothis article it is explained with the whole theory of dharma by explaining its origin, usage, pros and cons examples and its vast meaning.

In this article, we will see that in the early times of modern society of India there existed no such term as “LAW” which at some point felt unjust to the European powers as the Hindus were being governed by the British laws and not Hindu laws. To fix this issue the Hindu texts were translated into English  so the Hindu laws can be used in the smooth functioning of the government.

The term “dharma” etymological meaning is ‘dhar’ means to bear or carry or hold and ‘ma’ means men, so it means one who carries out or bears the responsibilities, but just bearing the responsibility could be enough to be called dharma? the answer is noone should know how to do any sort of work and fulfill the required discipline and respect for the work. In this paper we will see VI different topics where dharmais derived in hindu law society.

This explains that dharma maintains the balance of the on two levels- the cosmic level and the micro level. The cosmic level is balanced when one individual maintains everything and in the micro level every element contributes in maintaining overall balance but if anyone disregards the dharma he is said to committed adharma because of which the balance is suffered.[i]

It further explains what dharmas do where he points that everything which a human being does is somehow the other connected to dharma whether it is the sleeping plan,dietplan,retirement from work plan everywhere dharma works but are the laws mentioned in the dharmasutras all correct? No from the standpoint of today’s society religion needs to be separated that from the law which was an issue in the dharmasutrasand dharmashastras, in which if a lower caste individual has committed any crime to a Brahmin  he will have to suffer till his next birth but if the same is done by any upper caste to a lower caste there will be no corporal punishments for them which is unfair and unjust.

“Nothing in this world comes up without any reason” it is a very famous saying and so similarly the dharmashastrasand dharmasutras too had a reason,to provide a lawful,ethical,peaceful and tender livelihood but dharma didn’t just evolved in a minute or two it took time,it too has evolved from a branch and that branch is the holy Hindu literature

“The Vedas”,thevedas and dharma are synonymous, but it is said that the vedas aren’t written by men but by the sages who transferred it to mankind.

Comprehensiveness of Hindu Dharma and law

Intellectuals state that the teachings of the vedas are incomplete therefore the dharma that we know is incomplete though it is widely said that the Veda is indeed complete but it has been partly transferred to mankind.They even mention that in earlier times laws weren’t that much efficient and it wasn’t considered important that’s why in the dharmasutras there are very less legal rules and laws but in later time the legal practices gained popularity and then it was found more in the dharmashastras, still It would be equally difficult to draw a clear picture of the laws governing land ownership and land tenure in classical India.

Unchangeability of Hindu dharma and law

The theory of dharma is considered as eternal (sanatan) and unchanging,though this theory is complex in itself but to claim this the writings we have show an uncommon and captivating consistency, given the way that they have been made over a period out of at any rate ten centuries and in different pieces of the immense Indian subcontinent. The Hindus believe in the four yugas (best to worst)- Satya,Treta, Dvapara, and Kali(Present Kaliyug). It is said that dharma was best in the first yug but in years it kept on deteriorating and at present dharma is standing on one leg.

There have been endeavors to show that the dharma messages were for sure put to pragmatic use in classical India, and that they do mirror the tradition that must be adhered to. A more detailed and sweeping endeavor to show the viable utilization of the dharma analyzes the general sets of laws as they rise out of the dharmashastras of Manu, and Yajnavalkya, and infers that they reflect two totally different monetary and social circumstances. In the manu we see 3 levels of fines being 1000panas(highest),500panas and 250panas, whereas in the Yajnavalkya fines imposed as 1080panas( highest),540 panas, 270 panas. It must be logically accepted those Brahmins who realized the writings more likely than not attempted additionally to authorize them, at any rate partly, at whatever point they were approached for exhortation.[iii]

Further to explain the silver lining of Dharma and law we can look into the legalities that Indian Courts took into consideration. To connect Dharma and law the very prominent case that we should come across is the “Indian young lawyers association Vs. State of Kerala” [iv]In this case it challenged the Constitutional validity of Rule 3(b) of the Kerala Hindu Places of Public Worship (Authorisation of Entry) Rules, 1965. This rules womens of age group 10 years to 55 years were not allowed to worship the deity of lord Ayyappa and were also restricted to enter into the temple premises. Though what in practice was basically the women aged between 10 years and 50 years were not allowed inside the temple premises.

This same issue was raised in 1992 by the PIL(Public Interest Litigation) filed by S.Mahendran in the Kerala High Court stating that there was an exclusion of women between the ages of 10 and 50 from Sabarimala Temple premises was in accordance with the utilization predominant from days of yore. Fourteen years later this case was again mentioned but this time the bench was not of a High Court but the Supreme Court Of India.[v]

Indian law has emerged throughout the years in situations where governments have passed laws to manage what they see as common movement, however it is related to strict practice. The religious bodies have protested government activity on the ground that the action is religious and not secular. To get the extraordinary rights under Article 26, most cases included an endeavor by gatherings to show themselves as an unmistakable religious denomination.

The Highest Judicial body of our country i.e The Supreme Court manages and handles all the contraries and situations so that fair and just decisions are made and are in the public’s domain of interest and so was done in Sabarimala Temple case judgement. To reach a verdict a lot of questions were raised and a lot of cases were taken for reference,herein I am mentioning a few judgements which somewhere made the Indian Courts feel that they were evolving out of the religious notions and bringing an upliftment in the societies of Indian Culture.

This case was registered in the late 1950’s where the trustees of the temple of Sri Venkataramana of Moolky[vii]challenged the Madras Temple Entry Authorisation Act, 1947 which threw open the doors of the temple to the Harijans, their sole demand was that harijans should not be allowed in the temple. In this case Justice VenkataramaIyer J, did not give the religious denomination complete autonomy in the matter of deciding what rights and ceremonies are essential to its religion. He stated that the demands were not essentially religious as the religion doesn’t allow this in any scriptures.

In a similar case of Qureshi Muslims of Bihar petitioned the Supreme Court asking for removing the ban on cow slaughtering as their religion demands a sacrifice of cow on the holy day of Bakrid,but the Court again slammed the petition by claiming that there was no evidence to show that sacrifice of cows on Bakrid was an essential practice for the Qureshi Muslims.

Indian Courts were facing so many cases which were on the boundaries of religious attributes and to defy the terminology of every case was getting harsher and full of difficulties. This again happened when the case of chandims were presented in front of the court seeking for banning offerings by the pilgrims on the dargah of Hazrat Khwaja Moin–Ud-Din Chisthi of Ajmer. Justice P.B. Gajendragadkar J while dismissing the case dropped a remark saying “even purely secular practices which are not an essential or an integral part of religion are apt to be clothed with a religious form and may make a claim for being treated as religious practices within the meaning of Article 26.”[ix]

So now the courts were making the distinction between religious practices and superstitious beliefs,and in the same account the Sabarimala case verdict was passed

In this paper we drew a very fine line between the term dharma and law by giving opinions and proposed ideas but on the very other hand also mentioned the quote of the translators “dharma equals law”.Thus, over the decades, Indian Courts have played an important role in deciding what is or is not essential to a religion, and what practices are mere superstitions and beliefs couched in a religious colour.This judgement takes the bull by the horns, refusing to find a way out from discussing the taboos of menstruation,but is it always the duty of the courts to tell us the distinctions to serve a life of dignity.

Sowe can conclude that there is no perfect definition to what dharma means as it is very vast but all we know with this article is that with dharma one individual can lead a daily existence of bliss and brimming with fulfillment.

This Blog is authored by Vaibhav Vikash, of Symbiosis Law School, Nagpur.