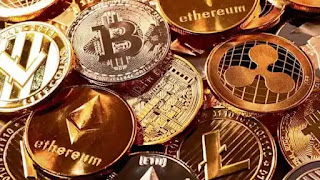 Cryptocurrency is the decentralized virtual or digital currency that is free from government intervention and it is not possibleto counterfeit. Popularcryptos are Bitcoin,Litecoin, Ethereum and many more. They are based on blockchain technology which is a distributed ledger where all the transactions get recorded and it is a securedtransfer of money, as thereare no middlemen or third person. “Crypto”refers to variousalgorithms and cryptographic entries to safeguard all these entries. Then comes Bitcoin mining, where new bitcoins are entered, mining means here solving extremelycomplicated math problemsusing sophisticated hardware.The miners maintainthe ledger of the transactions of the peoplewho are purchasing Bitcoin. But there comes a question, where is the privacy if everyone can know how much I am earning?The solution to this questionis Cryptography, where codes are used for encrypting written communication, the name of the person is not written. It is a process of protecting information by encoding it into an unreadable format. The interesting thing about Bitcoin is the limitation of mining Bitcoin is 21 million where 19 million has been already mined and it is estimatedthat by 2040, the remaining2 million will get mined. And mining gives cryptocurrency as a reward to the miners without the need of putting down of money which is known as Proof of Work, but Proof of Stake is the alternative solution for the POW because POW needs excessive use of electricity. In POS, miners are randomly selected to validate transactions (though it is not completely random, the miner with more no. of cryptocurrencies in their deposit gets first preference and it requiresa specific numberof currencies to be offeredas collateral which is called Stalking.

The journey from Barter to cryptocurrency

Money does not have value in itself, money is the medium that is universally accepted by the people in exchange for goods and services. In earlier times,there used to Barter system,where commodities were exchanged with commodities like: – Cow for 10 kgs of rice. Then evolved paper money and coins, metals were used to make metal coins and China became the first country to issue paper notes. Then the government-issued fiat money (Paper currency) like- US dollar, Indian rupees, where golds were kept in the Reserve Bank and the currencies were printed according to the value of the gold and it became very easy to store paper currencies in the banks. But, in the case of fiat money, there is no privacy, like the bank knows how much we are earning, transferring, or depositing. Gold and Silver are kept as assets but they are not the medium of purchasing commodities. Fiat money leads to inflation (the price of commodities gets high and the purchasing power gets low), which loses its global value. Then the electronic payment came in to picture like: – Debit or Credit Cards issued by the banks for the medium of exchange of commodities. And finally, after several attemptsof creating onlineencrypted currencies, Bitcoin evolved as the very first cryptocurrency in the year 2009. It was invented by anonymous SatoshiNakamoto.

Pros and Cons of Cryptocurrency Pros

·         The cryptocurrencies are decentralized, it is free from governmentintervention or any third person or middlemen,thus privacy is maintained.

·         It is much cheaper comparedwith other online transactions.

·         Payments are safe and securedas payment is made directlywithout revolving the currency in different hands.

·         The cryptos do not have geographical boundaries.

·         The cryptocurrencies cannot be counterfeited, as it is free from middlemen.

·         Payments are irrevocable and there comes a chanceof incurring a loss.

·         Mining cryptos requiresan excessive amountof electricity and it is a threat to the environment.

POS is the solution to it.

·         Bitcoin can be kept only as an asset like Gold, it is yet not a medium of exchange for purchasing commodities.

Bringing Cryptos as a medium of exchange can be a threat to rupees, so it is better to keep that as an asset.

·         As the cryptois decentralized, it is very easy to replicate or duplicate the currencies, as there is no such body to repair the loss caused to a person for such a fraudulent act.

Countries that have owned Cryptocurrency and got benefited

Countries like Nigeria, Vietnam, the Philippines, Turkey, Peru, Switzerland, China, the U.S, Germany, and Japan have accepted Cryptocurrency. Crypto has becomea cheaper solutionfor sending money across borders. And the prevalence of peer-to-peer payments has led to the steep rise of Cryptocurrency use in Africa’s largest economy. Nigerians use cryptocurrencies in their day-to-day uses. Many cryptocurrency users are in Latin America.

In the Netherlands Bitcoin has been accepted widely, they have Bitcoin ATMs. In Georgia, there are no BitcoinATMs, but here one can buy and sellcoins with a wide varietyof options, they do not have any legislative restrictions for crypto exchange, and also it gives a beneficial tax system for encouraging foreigninvestment in the IT industry. In Estonia, dealerscan carry out Bitcoin transactions in banking, insurance, or healthcare. In Denmark people invested in Bitcoin 24/7, where the economic graph is increasing day by day. In South Korea, all the taxeson cryptocurrency got waived so that people can invest more money in crypto. The United States of America also has ATMs and other start-ups to promote Bitcoinsbut there is a Capitalgain tax for the cryptos. In Canada there are over 900 ATMs of Bitcoin, capital gain tax is there. In Slovenia, there are 200 ATMs of Bitcoin, where income tax is imposed instead of taxing Bitcoin as either money or security. In Singapore, Cryptos are the revenue asset and taxes are applied depending on the nature in return. It allows cryptocurrency companies to operate without a license for six months. Japan was the first country to embrace bitcoin and make it legal all over the world. And it proposeda crypto exchangethat was aimed at improving

their security. All the businesses and start-ups have started investing in Bitcoins and to acceptcrypto exchanges in their usual activities. It is a very cryptocurrency-friendly country.

The global cryptocurrency is valued at $3trillion. Accordingto WTO, blockchain can revolutionize international trade and it is going to evolve a new technology. IMF says cryptocurrency is the next step towards the evolution of money and according to the World Bank, through Blockchain a new wave of technology is going to come. China intended to put a ban on cryptocurrency and which is an opportunity for India. China has cracked down on crypto mining operations and the People Bank of China directed banks and payment firms to wipe out cryptocurrency trading. The electricity in China is very cheap and thus over the years, a large percentage of crypto mining took place.China is not in favor of decentralizing anything and thus People Bank of China is directed to cut down all payment channels directed with cryptocurrency transactions. China is launching its own digital currency and that is the reason for banning decentralized cryptos. Where many countries have opted to regulate the world of cryptocurrencies, China took strict measures over the years to ban them.

Status of Cryptocurrency in India

The government planned to ban cryptocurrency and which allowed RBI for digital coins. The government says a ban should be made on private cryptos, which impliedly means a ban on private blockchain. There are mainly two types of blockchain, they are private blockchain and public blockchain. In the case of a private blockchain, one needs permission to access and only a limited number of people can view the ledger, only the parties participating will have the knowledge of the transactions. An example of a private blockchain is the Hyperledger fabric. On the other hand, public blockchains need no permission. No one is there to control the network. Examplesare Bitcoin, Ethereum,etc. In this blockchain, a proper ledger is maintained. According to the cryptocurrency and Regulation of Official Digital Currency Bill 2021, it facilitates a framework to RBI for issuing digitalcoins. Cryptocurrencies are not illegalin India, but the government is not accepting them widely for trading. Since the era when the Internet evolved, it was quite hard to accept the new technology, but still, it was accepted globally and now we cannot imagine spending a single day without the internet. Most of the countries are accepting Bitcoins all over the world if India delays it is going to regret in near future. During the time of Demonetization, the government put a ban on usingthe notes on 500 and 100 but at the same time, new notes of the same value were issued in exchange, so the consumer faced no loss or profit. But in the case of cryptocurrency, if the government puts a ban, nothingis going to give an equivalent value of approx.6 lakh crore rupees and our countrywill not be able to handle such loss.

The Indian government is cracking down on cryptocurrencies for the fear of financialinstability, that if a non-official virtual currency is regulated then the monetary policy of the government will be hampered.And as the entire transactions are decentralized, there are higherchances of money laundering, fraud, or terror financing. And also, the transactions are transparent and thus If India buys some very expensive or spends on military expenses, the other country will be able to see the entire transactions.

Though the government has put a restriction on cryptos, the people of the country are still investing in it. In the time period of the pandemic Covid-19, India did the biggest donation through cryptos (Ethereum was donated $1 Billion). And new companies or startups can also make their profit margin high with the help of cryptos. It is not necessary to bringcrypto as an alternative to rupees, but it can be kept as an asset.

In the Union Budget, 2022, finally India’s finance minister announced that the Reserve bank of India (RBI) launches its digital currency starting from April 1, which is a great initiative by the Indiangovernment. 30% tax is imposed on income from digital assets or crypto, no set-off will be allowedin case of losses. Also, gifts in virtual digitalassets would be taxed in the handsof the recipient.

During the pandemic,many people lost their jobs, and in today’s days it has become very hard to get a job, thus to earn a livelihood people need money. Banks nowadaysprovide a very less percentage of interest against fixed deposits, so people of the country are not in the advantage of investing their money in FDs. They want a platform to invest where they can get the fullest advantage and earn more profit. Investing in cryptocurrencies can be the best option for them. It gives the highest benefitto them. Other countries are already promotingcryptos and they are getting benefited as well. It is time for India to go with the flow of cryptocurrencies and make the economy of the countrystable.

1)       Why China’s cryptocurrency ban is an opportunity for India? The Economic Times, URL: https://economictimes.indiatimes.com/markets/cryptocurrency/why-chinas-cryptocurrency-ban-is-an-opportunity-for-india/articleshow/87649012.cms?from=mdr