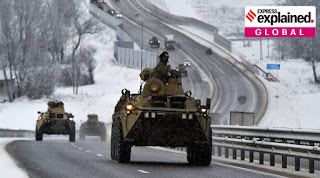 The conflict between Russia and Ukraine is an on-going conflict as over the past few weeks it is being reported internationally that there is a very high possibility that Russia may invade Ukraine, and this is evident by the Reuters news headline on 14th November 2021 [i]where it is stated that Ukraine is confident that Russia will invade it soon since Russia had mobilised nearly 1,00,000 troops near its border. The USA and other European countries have warned Russia saying if it invades Ukraine strict actions will be taken against it. Whereas on the other hand countries like China have affirmed their support to Russia on this matter. Another way to look at this situation is that a lot of major countries have aligned themselves with either Russia or Ukraine and for that reason it is believed that there is a threat of a World War III and the same was stated by Sky News in their article on 18th December 2021.[ii]

In order to understand the tensions between Russia and Ukraine it is imperative to understand the past of these two countries. Let’s start with the year 1991, in the mentioned year Soviet Union (which became a union of 15 countries in the year 1922 also known as the USSR) was divided into 15 parts or we can say it was divided into 15 countries in which Russia was the biggest country and Ukraine was also a part of Russia before 1991 but after that Ukraine was made into a separate country.

The Breakdown of Soviet Union

After the partition of 1991 there were two categories of people in Ukraine. The first category believed that they were now finally independent, and they would like to become a part of the European Union and become like other European countries whereas on the other hand there were people who had sympathy for the Russians as they themselves considered them to be Russians. They believed that Russians and Ukrainians are ethnically similar, both are put in SLAVIC category, both had similar religions etc. So, for these types of people the partition that happened in 1991 was nothing short of a tragedy and one of the people who believed that was Vladimir Putin who is currently the President of Russia and for that reason, in an article published in Reuters on 12th December 2021[iii]Putin had said that after the separation of 1991 there were 25 million people that suddenly found themselves cut from Russia. In Ukraine there are considerable number of people who are pro-Russian but the majority of the people (53% according to a survey published in the Brookings on 18th October 2017[iv]) want Ukraine to join the European Union and according to the same survey 46% of the people are in favor of joining NATO (North Atlantic Treaty Organization). The division of people which I talked about earlier is not limited to the people in Ukraine, but such is also the case with Ukraine’s politicians.

1st May 2004 was a historic day for the people in Ukraine as on that day the European Union took in 10 new countries as their members. The interesting thing is that 8 out of 10 countries were formerly a communist country which were either a part of the Soviet Union or were under the influence of the Soviet Union. NATO is a military alliance and for that reason Russia doesn’t want Ukraine to join NATO as Russia is surrounded by European countries on one end and Japan on the other which is also a member of G7 and QUAD group. Apart from that Finland also shares a significant border with Russia although Finland is not an active member of NATO but has been a contributor for NATO led operations. Ukraine also shares a significant border with Russia and if Ukraine becomes a part of NATO, then naturally that would increase the pressure on Russia because then it would be surrounded in all directions.

In the year 1997 NATO – Ukraine commission[v] was formed so that NATO and Ukraine could become partners of each other. After about 10 years Ukraine expressed its desire to become a part of NATO during one of NATO’s summits and other members of NATO were also ready to welcome Ukraine but only after a proper procedure was done and so Ukraine was asked to work on their Membership Action Plan (MAP) to become a part of NATO. In June 2017 the Ukrainian Parliament adopted legislation reinstating membership in NATO[vi] as a strategic foreign and security policy objective.

The Ukraine Revolution of 2014 is also known as the revolution of dignity. During this revolution, Millions of people protested on Ukrainian streets demanding resignation from the president and accusing the president of corruption. In February of the following year, the president responded to protests with even more violence, which turned the protest into riots. More than 100 protestors died, and 18 police personnel lost their lives as well. But finally, after this, the Ukrainian President Yanukovych was impeached, and the Ukrainian government was overthrown and the elections were held again.

In March 2014, Russia sent its army to invade Crimea. Crimea is in the South of Ukraine; it is an autonomous region of Ukraine. In other words, Crimea can be considered as an area or state of Ukraine that had been given autonomy to quite an extent that it can be considered almost as an independent country. However, in 2014 Russia sent its military to capture Crimea and the rest of the world could not do anything but to watch. In response to this Ukraine said that the actions of Russia are a violation of international law. In reply to this, Russia carried out a referendum in Crimea, trying to show that they aren’t really invading Crimea, rather they have just sent their military merely to ask the people about what they want and whether the Crimean people wanted to join Russia or Ukraine. The official result of this referendum showed that 97 people voted in favor of Russia and it had a voter turnout of 83%. However, this referendum wasn’t recognized by any international agency as it was considered illegal. In fact, the United Nations believed that Crimea is officially a part of Ukraine. In the month of May 2014, Your Indian news site had posted that the Russian president’s Human Rights Council had posted the real result of the referendum on their website by mistake, and it was quickly removed later. These results showed that the voter turnout was only 40% and only 50% of them had voted in favor of joining Russia. meaning that only 20% of the Crimeans had voted in favor of Russia.

After the invasion, Russia had put up a high defense fence between the border of Crimea and Ukraine and started building up a lot of infrastructure. The whole Crimea region is under Russian control. However, the Ukraine president has stated that Crimea is Ukrainian territory, and it will also be Ukraine’s goal to liberate it but Russia’s President Putin asserts that it is Russia’s territory.

The Russia-Ukraine conflict, as mentioned in the beginning of the analysis, is an on-going conflict so no conclusions can be given per se. As of now, what can be given are opinions and speculations. So, in our opinion Russia feels insecure about Ukraine joining NATO as then it would be surrounded in all the directions, also it is to be noted that Russia and USA have never been able to maintain good relations with each other and Russia is constantly under economic sanctions from the United States, so that is another reason why Russia doesn’t want Ukraine to join NATO. I say this because if Ukraine joins NATO and USA directs Ukraine to do something that would harm Russia economically then it would become difficult for Russia to retaliate against Ukraine since the force of NATO and sanctions from the USA would prevail.

On the other hand, there are some countries and politicians who believe that Russia is only trying to scare Ukraine to extract some sort of deal from the USA (it may be trying to get some leniency on the economic sanctions) so they believe that nothing should be done. However, the situation is such that it cannot be overlooked since Russia had already invaded Crimea in 2014 so the threats of Russia cannot be taken lightly. Another reason why the threats of Russia cannot be taken lightly is because even in 2014, before invading Crimea, Russia had done the same thing when it deployed 1000’s of soldiers in the context of running a military drill.

This blog is authored by Saksham Bhatnagar, student of Symbiosis Law School Nagpur.