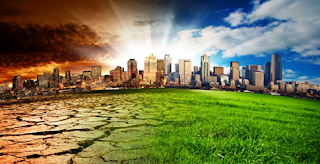 Climate change is one of the biggest problems the whole globe is facing in today’s time. It has become a reason for concern for many economies as the effect of climate change, such as damage from severe weather and health problems will impose a big cost on the society. India being located in the south-eastern Asia is affected the most by the heat wave during the summer season and increase in the global warming contributes to the same, and further to this in a report by NASA and NOAA, 2016 was reported the warmest year on record. The agricultural sector is the most vulnerable sector in such climate change as it tends to reduce the production of the crops as this heat deteriorates the crops and in developing countries like India due to lack of infrastructure and newer technologies in most of the part the rural areas there is a direct effect on the farmers and the farming communities.

Developing countries already suffer from hugely adverse effects of adaptation to climate change. India in addition already has a sizeable climate variability due to monsoons. This compels them to devote substantial part of their GDP to meeting this challenge. All mitigation of greenhouse gas emissions, unless it results as co-benefit from sustainable development processes, will cast net additional economic burden on developing countries. Most mitigation of GHG emissions in developing countries leads to diversion of resources, earmarked for development, to meeting a global environmental problem for which such countries are not responsible.[1]India has dependency on coal for most of its energy output and it is only going to increase in the coming future by 40-50% by 2047, India was also ranked as the third largest country contributing to carbon emission in the world in 2015. Such emissions will only add up to the greenhouse gases and increase temperature. The research will explain how the climate change will affect the agriculture sector and further affects the economy and the other sectors.

Agriculture is and has been the largest livelihood provider in India which is more prominent in the rural sector. The Indian economy at the time of independence had 72% of workforce in the agricultural sector which contributed to 50% of the national income. This trend has been declining throughout the years and has come down to contributing to only 17% of the total GDP (Gross Domestic Product) but it still provides employment to 53% of the population.

Climate change will result in changes in the temperature, rainfalls, climate extreme (e.g.- heatwave, drought etc..), rise in water level due to melting of glaciers…etc. And as the climate continues to heat up due to global warming, the most affected part of the population will be the farmers, and farming communities. Further it has been predicted that global warming will reach 1.5 degree Celsius between 2030-2052. There are already consequences witnessed by the world of 1-degree Celsius global warming due to which there is rise in the sea levels and diminishing arctic sea ice. If this temperature increases and goes up to 2 degrees Celsius the largest impact on the economic growth will be on countries like India, China, and others in the southeast Asia. The monsoon onset dates have also varied from year to year even after the predictions made by the Metrological Department of India

Agriculture is a large share of developing economies than of industrial economies and if steps are not taken to curb carbon emissions, agricultural productivity could fall dramatically, especially in developing countries’ economies. If such climate changes occur the productivity of the agricultural sector is going to go down and as the population is growing and the demand for food is also growing there will be less of supply and more of demand if the crop production keeps getting affected by the climate change. The UN Food and Agricultural Organization showed that grain yield rose at a rate of 2.7 percent in 1960 -70, and now have risen at only by 1.6 percent annual rate in the past quarter century. As the population is increasing and lesser area of land with this level of increase in climate change it will be very difficult for the government to help meet the demand of the population with less supply.[3]

Agriculture sector affects the economy in many ways, it provides food and raw material to non-agricultural sectors of the economy , creates demand for goods produced in non-agricultural sector, providing investable surplus in the form of savings and taxes to be invested in non-agricultural sector, earning valuable foreign exchange through the export of agricultural products, provides employment to a vast number of uneducated, backward and unskilled labour. [4]India is one of the largest exporters of rice and a few other products like vegetables, dairy products, groundnuts etc. Developing countries in the world are the largest exporters of primary products and if such exports of agricultural goods decline, these countries will incur heavy deficit in the balance of payments which might result in foreign exchange problem.

Ø  Effect on the Economy and other sectors

India is predicted to be the worst hit amongst all the nations by the adverse effect of climate change. Heat wave is gradually affecting the global warming due to the carbon emissions which in turn is affecting the population as India has seen around 4520 deaths because of heatwave. According to the Environment Ministry desertification, drought and land degradation costs India about 2.5% of the GDP IN 2014-15. The economy can get affected as this climate change will affect many sectors of the society like the agricultural sector, infrastructure, labour, tourism and many more. Most of our population depends upon agriculture as its livelihood, due to such climate change there has been reduction in the workforce of the agricultural sector because people are moving towards the service sector for job security. There are other areas too where climate change has a direct effect on the economy , one of them being labour sector as India is projected to lose 5.8 % of working hours in 2030 which makes productivity loss equivalent to 34 million full-time jobs, due to global warming impacting agriculture and construction sectors .It is suggested that by 2030, 2.2% of total working hours worldwide will get lost due to higher temperatures which equals to loss of 80 million full-time jobs, the loss in productivity by 2030 because of heat stress could be the equivalent of India losing 34 million full-time jobs which could be the  (the highest among the world’s most populous nations.[5]

It is now very prominent that the climate change is a very big concern for the globe, day by day increase in the temperature, rise in sea water, melting of glaciers, heatwave, greenhouse gases – carbon dioxide, methane and water vapour into the environment will all contribute to the change in the climate and worsening of the same. The prediction of the rise in global warming temperature by 1-2 degrees Celsius will affect the whole of the globe, as the most affected sector will be the agricultural sector and the developing countries which have most of their capital inflow from export of the primary goods they export, the farming communities will be at a huge loss and as it is said that most of the rural sector depends upon agricultural sector they will have nothing to earn.

It is suggested that it is high time now as there is no time left to think, actions must be taken by the countries to tackle such situations by taking strict measures to stop such changes in the climate by having stringent laws to reduce the carbon emissions, find new ways to move from fossil-fuel based energy system to other areas where there is less carbon emission ,have new technologies introduced in the agricultural sector for the farmers, set up policies, invest in research related to such issues mainly in the under developed and developing countries and launch of conservation programs.

4 Importance of Agricultural Sector in a country’s economic development, Muharram Macatta, at:- https://www.ippmedia.com/en/features/importance-agricultural-sector-country%E2%80%99s-economic-development

5 Working on a warmer planet: The impact of heat stress on labour productivity and decent work, International Labour Office, at :- https://www.ilo.org/wcmsp5/groups/public/—dgreports/—dcomm/—publ/documents/publication/wcms_711919.pdf