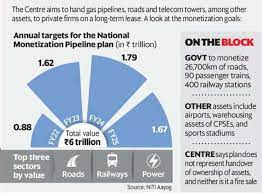 Infrastructure is the core of any development in any nation or economy. Investment in top-notch quality of infrastructure aids in increased employment, access to markets and materials, improved quality of life, and empowerment of vulnerable sections. Capital and asset recycling are one of the prerequisites of investment-led growth, and a key to value creation in infrastructure for two objectives:

2.      Usage of private sector efficiencies in operations and management of infrastructure

The union budget has focused on the monetization of assets, for 2021-22, as one of the three pillars for enhanced and sustainable infrastructure financing, by announcing the launch of a new national monetization pipeline. NITI Aayog has made the creation of the “National Monetisation Pipeline (NMP Volumes I and II) in respect of the brownfield core infrastructure assets, which is in furtherance of the Government of India’s strategic divestment policy. The major aim to establish is the reduction of government’s presence to a selected area of sectors, and the rest handled by the private players.

Asset monetization means “a limited period license/lease of an asset, owned by the government or a public authority, to a private sector entity for an upfront or periodic consideration”. The concept of asset monetization was introduced in India via the Toll-Operate-Transfer transaction (TOT) of the National Highways Authority of India (NHAI). The monetization of diversified areas of assets for different objectives makes NMP a huge and upfront initiative. The assets to be monetized are diversified into core and non-core:

However, the NMP in its current stage is mainly concerned with only the core assets of the central government line ministries and central public sector enterprises in infrastructure sectors

The framework of the National Monetization Policy for core asset monetization has the following key imperatives:

1.      The focus for monetization is the brownfield de-risked assets with stable revenue streams. The assets that are already in existence and have the ability to be upgraded and modified further are brownfield assets. The main idea for the government is to unlock the value of investments in existing public sector assets that are either languishing or underutilized with an invite to private sector capital and efficiencies. The proceeds would be further utilized to develop greenfield assets.

3.      Structured partnerships under transparent competitive bidding and defined contractual frameworks. The partners would have to abide by strict key performance indicators and performance standards.

The potential aggregate monetization through core assets under NMP is estimated to be INR 6 Lakh crore over four years from FY 2022 to FY 2025.

There are mainly two models of asset monetization in volume 1 of the NMP:

1.      Direct Contractual Approach: The asset is transferred to a single or a consortium of developers (chosen after a transparent bidding process) through a defined contractual agreement with payments made either upfront or periodically. These agreements would include:

iii.                Design-Build Finance Operate Transfer agreements, which were entered into by the railways department for railway station redevelopment projects that enjoy existing brownfield infrastructures like tracks and signals.

ii.      Inadequate due diligence due to inaccurate/lack of information

It is crucial for NMP projects, the public sector to have a mindset of a “Partner” and aid the private sector partner in ensuring a fair return rate on investments.

The government does not have a satisfactory success rate in the monetization of Brookfield assets, taking an example of the privatization of Indian Railways, which did not generate interest from the private players and there were no serious bidders for these projects. The private players are expected to invest large capital in the existing public assets to eventually realize revenues and the revenue structure may not be satisfactory to them making the project non-feasible.

3.      Long Term Leases: This model aligns with the PPP model. The model is apt when it comes to sectors such as telecom, where the license to provide an infrastructure service is already available with a private party and the unused/underutilized assets of public sector entitiesare leased out to such private-sector party for providing service under its license.

1.      Transaction Structurization: There is a need for “differentiate market structures” for different asset classes at different levels of maturity. Government should not implement one size fits all approach and prefer a personalized and asset-specific monetization plan.

2.      Bankable contracts: The government should ensure that the contracts entered by the parties are bankable and have proper risk mitigation measures to protect the investors. The private investors have an objective of making profits out of partnerships and contracts, that have revenue structures for them. The proper mechanism for cost and time overruns due to government actions or omissions would need to be provided. The contracts would need to be structured credibly with flexible and fair amendments, enforcement, and dispute resolution.

3.      Independent regulators and separate dispute resolution mechanism: As there is the constitution of Core Group of Secretaries on Asset Monetisation (CGAM) under the chairmanship of cabinet secretary, independent regulators must be setup in sectors that are going for NMP and a specialized adjudication tribunal should be created.

There is also a need for a quick and efficient dispute resolution system, with regulations given by the government for operations of these projects including valuation. To increase investor confidence, the government’s role as a partner and regulator will need to be segregated.

5.      Due diligence: The government would need to provide the vendor due diligence report on the assets and reduce risks and issues associated with the assets. The investors would also need to conduct detailed due diligence on the operational, financial, and technical aspects of the assets.

6.      Transparency: This is one of the most crucial aspects of the project, as there should be an open, fair, and transparent bidding process for the selection of the private parties, and fair valuation is achieved. The opinion of the stakeholders should be considered with their consultations before decisions.

The project aims to boost competition and collaborations by inviting and attracting private players, to improve the public infrastructure sector. The success of the NMP would be subject to successful and efficient implementation or execution of the sector-oriented process with open and fair participation, with strategic and negotiating solutions.