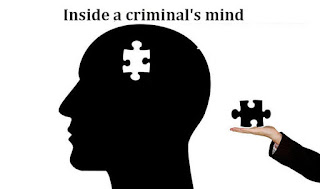 1.      A group of ordinary men who are driven to crime by overwhelming external circumstances.

2.      The apparently customary individual who is carried away by an irresistible impulse.

3.      The neurotic criminal who is driven by equally irresistible but unconscious forces, the nature of which is unknown to him.

4.      The genuine criminal who prides himself on the delinquent exploits in which he expresses his anti-social attitude.

5.      A group of criminals whose behaviour is the result of mental deficiency or organic illness.[1]

Based on Dr. Schmideberg’s classification, one can discern those certain factions of the society are more prone to have unexplained psychological tendencies that can hurl the urge to engage in a behaviour that is immoral if not criminal. In these modern times when the concept of crime has become so ambiguous and equivocal, the study of the criminal psyche has become quite trivial to develop an understanding of what drives certain criminals to commit a crime.

The essence of this theory is that interaction with the social environment is the principal means by which human behaviour can be explained. The distinctive character of behavioural theory is that people adjust or alter their behaviour, as this behaviour triggers reactions in others [2]. The conduct is accompanied by incentives, and negative responses or penalties are extinguished.

The adherents of Behavioural theory believe that certain factors like a threat, challenge, any stressful event, beliefs like bellicosity and vehemence would be valued or any social rewarding system that values violent behaviour might compel an individual to follow a violent path. The second cause of compartmental issues, environmental experiences, indicates that people living in crime prone areas are more likely to have violent activities than those residing in low-risk regions.[3]They are interested in schools or extracurricular sports, for example football, baseball, or girl scouts.[4]Mass media was the third cause of behavioural issues. Researchers also indicated that movies, video games and TV shows portraying violence are detrimental to children. The consequences for children who witness and imitate this behaviour by the professional athletes is both concerning and alarming.

Psychopathy was described as a ‘‘socially devastating personality disorder defined by a constellation of affective, interpersonal, and behavioural characteristics, including a propensity to violate social and legal expectations and norms”.[5]Conduct disorder is one example of a disorder seen in kids. Children with behavioural disorder have trouble following laws and acting in ways that are socially appropriate.[6]Conduct problems in young adults are ultimately manifested as a group of behavioural and emotional issues. Many potential causes exist; some of the most common include child abuse, brain injury, genetics, poor school performance, and a traumatic event.

Children with conduct disorder are more likely to display violent attitudes towards others, and they can be abusive to animals. There is no doubt that a medical and psychological assessment must be offered to children who display the behaviours described above. It is important to remember that many kids with conduct disorder may have another current illness, such as anxiety, posttraumatic stress disorder, misuse of drugs or alcohol, or attention deficit disorder.[7]

Another example of childhood disorder is oppositional disorder. Oppositional defiant disorder manifestations or characterizations include defiance; uncooperativeness; irritability; a very negative attitude; a tendency to lose one’s temper; and deliberately displaying annoying behaviours towards peers, parents, teachers, and other figures of authority, such as police officers.

Psychodynamic theory proponents claim that the personality of an individual is controlled by unconscious mental processes grounded in early childhood. Sigmund Freud (1856–1939), the father of psychoanalysis, originated this theory. Freud created an additional paradigm in order to broaden his theory to account for ordinary and abnormal personality growth – the structural model – which includes three mental constructs called id, ego and super-ego, all of which interact.[8]

According to Freud, the id is the seat of drives and instincts; id is concerned with instant pleasure or gratification. This is regarded as the principle of pleasure, and when considering criminal behaviour, it is always paramount. The ego, which is thought to evolve early in the life of a person, is the second aspect of the human personality. The ego serves a different important purpose, as well as the rational, sensible, reality-oriented part of the mind; it helps us handle fear by using ego-defences. Ego-defences are simply mental mechanisms that we use when we feel threatened automatically and unknown (Cramer, 2000, 2006).The third aspect of personality, the superego, grows as an individual absorbs the community’s moral norms and values; parents; and significant others such as friends and members of the clergy. The superego’s priority is morality. The superego serves to assess the acts and attitudes of individuals.

The ego mediates between the need for instant gratification by the id and the superego’s strict morality. We may presume that young people understand right from wrong as well as adults. Psychodynamic theory has much strength that account in the contemporary psychological thought for its continuing importance.

·         Theories about intelligence and crime

The essence of Intelligence based theories is to establish a relationship between criminal psyche and intelligence quotient. When the concept of Intelligence quotient was introduced to measure intelligence, psychologists like Goddard concluded that low IQ was the sole reason that individuals were driven towards criminal attributes and delinquency.[9]A study was conducted by Hirschi & Hindelang in 1977 by which they concluded that education in schools is the factor that mediates between IQ and delinquency. They discerned that the difference in IQ between delinquent and non-delinquent individuals was what led to prejudice against them by the teachers and fellow students which eventually pushed them away from the chances of normal employment, social presence and led to development of criminal attributes in such individuals.[10]In the early twentieth century, criminologists often argued that intelligence was closely linked to crime.

While some researchers say there is a direct connection between intelligence and crime, others suggest that only an indirect correlation exists. Some claim, for instance, that low intelligence results in poor performance at school. In turn, low school performance leads directly to criminal activity. The controversy surrounding the presence of the intelligence relationship is unresolvable.

Several researches and theories have established that certain individuals are more prone to commit crimes and delinquency than the others. Some psychologists believe that such criminal attributes and traits are inherited while some are of the opinion that individuals develop these traits due to interaction with certain environmental or social factors. In a study conducted by Bhojak in India, it was established that inmates who had committed crimes like murder scored quite higher on hectic and stressful life, obsessive and fanatical behaviour leading to psychopathic traits. [11]. The theories of psychopathy highlight the roles of mental illness and psychopathic personalities in development of criminal attributes. The role of intelligence, imitation and development of personality trait in childhood are some of the other rationales that is the thread that connects criminology with psychology. Therefore, it can be established that certain individuals are more prone to commit crime and there are various psychological factors that lead to development of these criminal attributes and traits amongst these individuals.

[5]Hare, R.D. (1993), Without conscience: The disturbing world of the psychopaths among us. New York, NY: The Guilford press