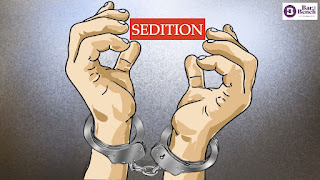 “Sedition is bred in the lap of luxury and its chosen emissaries are the beggared spendthrift and the impoverished libertine.”[1]

The freedom of speech and expression is a fundamental right guaranteed under our constitution with the essence of providing a sense of security to individuals who aim to attain self-fulfilment or are in some social pursuit. The freedom of speech and expression strengthens the pillar of democracy by providing a secure outlet for individuals that seek to discover the truth about something, to those who aim to strengthen the capacity to take decisions and facilitate a balance between social change & stability.[2]The freedom of speech and expression comes with a sense of responsibility that the individual exercising it must follow as well as the state having enough scrutiny in its responsible exercise among the citizens. In Indian constitution, article 19(1)(a) of the guarantees freedom of speech and expression to all citizens of the Indian republic. However, this freedom of speech is subjected to certain constraints like the security of the State, interests that govern the sovereignty and integrity of India, public order, decency or in relation to contempt of court, defamation or provocation to a felony. Merriam-Webster describes sedition as incitement of resistance to or insurrection against lawful authority. In a modern democratic state, the notion of a boundary between freedom of speech and sedition is often blurry and governed by state laws which in our case are established under Section 124A of the Indian constitution. Time to time, the question about constitutional validity of sedition in a democratic nation has been risen as a subject of continuous debates and discussions. The apprehension of this law being another colonial endowment or being used by the government to suppress the critique and violate the right to free speech forms the basis of the agony among the antagonists of this law.

Before making its way into the Indian constitution, the first draft on sedition drafted by Thomas Babington Macaulay was incorporated into the colonial Penal code in 1870 on suggestion of Sir James Fitzjames Stephen who thought it would be an expedient tool to curb legal issues in Government of India. [3]The draft finally made its way as an act when it was amended through the IPC Amendment Act of 1898 and formed the basis of the modern day Section 124A of Indian constitution.  The first trial that was held under section 124A was Queen Empress v Jogendra Chunder Bose, in Calcutta high court in 1891. Basu was charged under sedition on account of the claim of authorities that his article criticizing the Age of Consent Act of 1891was inflammatory and had incited rebellion. In this case, the Chief Justice William Comer Petheram explained the meaning of “disaffection” as “a feeling contrary to affection, in other words, dislike or hatred” and linked it with disobedience towards the government.[4]

Besides this, the most interesting sedition trial under the colonial rule was probably the trial of Lokmanya Tilak in 1897 who was charged under this law, found guilty by the jury and sent to eighteen months of rigorous punishment. During Tilak’s trial, Justice Arthur Strachey widened the understanding of Section 124A by explaining that the attempt to excite “feelings of enmity” against government was also a form of sedition. Besides this trial against sedition for his article “Shivaji’s Utterances” in his daily, Tilak also faced charges for his other articles that he published in his daily titled “The Country’s Misfortune” (12 May 1908) and “These Remedies Are Not Lasting” (9 June 1908) for which he was again found guilty and sentenced to six years of imprisonment in Burma.[5]

Besides Tilak, Mahatma Gandhi was another victim of this law who was charged and imprisoned under sedition for his three articles for Young India journal. While appearing in court, Gandhi referred to Section 124A as the “prince among the political sections of the Indian Penal Code designed to suppress the liberty of the citizen”.[6]

It is important to note that after the colonial rule ended, sedition was termed void & unconstitutional by various courts like the Punjab High Court in 1951 and a similar ruling was given by the Allahabad high court in 1959. Answering an appeal by the Government of India in 1962, the Supreme Court ruled that speeches against the government or political parties was not illegal, while upholding it as applicable to separatism by persuasion or force; this pronouncement had the effect of diluting the law.[7]

The continuous debate against Section 124A’s constitutional validity is fuelled by the fact that it is a colonial law which was aimed to suppress the voices of freedom fighters and yet still remains a part of our constitution in a modern day democratic republic. Section 124A describes an individual who practices sedition as anyone who, by words, either spoken or written, or by signs, or by visible representation, or otherwise, brings or attempts to bring into hatred or contempt, or excites or attempts to excite disaffection towards, the Government established by law in India and sets the punishment with imprisonment for life, to which fine may be added, or with imprisonment which may extend to three years, to which fine may be added, or with fine.[8]

Critics of this law are of the opinion that this colonial law curbs the freedom of speech and expression and must be scrapped or amended. Successive centre and state governments have been using this law as a tool to curtail the free speech of activists, media, political leaders, students, artists, comedians in the post-independence era. Between 2014-2019, 326 sedition cases were filed in India, charge sheets were filed in 141 cases which resulted in only 6 convictions.[9]

The instances of failure of conviction under charges of sedition in the courts are drastically high. Besides this, the abuse of the law for political gain is of the utmost concern.

A consultation paper published by the Law Commission in 2018 sheds light on the fact that sedition as a law has already been abolished or the right to free speech is already protected by amendments in constitution of different democratic states. Section 124A which was a law enacted in colonial era, was deleted by section 73 of the Coroners and Justice Act, 2009 by the lawmakers of the United Kingdom in 2009 itself. [12]

[1] George Bancroft, “The Office of the People in Art, Government and Religion”, p. 424