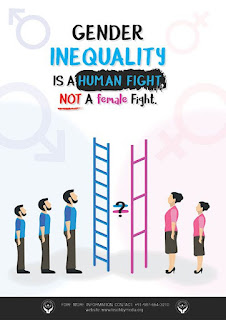 Maya Angelou quoted Gender equality as a human fight and not just a woman fight, alluding that gender inequality is a lifelong, unconscious and subtle process fueled among society through implicit cognitions about the role of women and men in stereotypical gendered pictures of community.In every angle of life, we see the paradox that makes the genders suffer adversities putting them in unpleasant situations. Gender inequality has become one of the most heartfelt social changes in the world,expressing the essence and certainty of breaking this vicious cycle of gender imbalance to reconstruct egalitarianism[1]. This can be achieved through an awareness of all the structural and individual factors amplifying the issuesof gender disparity.

When this is such a paramount socio-economic contention causing a revolution, questions are to be pondered upon. What is the history and reasons for gender inequality? What is the difference between gender equity, gender equality and women empowerment? And most importantly, Why is discussion and understanding of this issue important?

In the 1800s, women were not allowed to vote and surrender their property to their husbands upon marriage. In 1848[2], the USA, for the first time, called for equal voting rights. Recently in 2011[3], equal voting rights were given to women in Saudi Arabia. Notably, enforcing a mere voting right took 163 years which indicates the assumptions underpinning gender inequalityare resistant to changes.

A bias made it easier for the man to pursue divorce despite the Matrimonial Causes Act of 1857[4]. Germany outlawed spouse rape in 1997[5], Zambia in 2010, and it hasn’t yet been prohibited in India.

The overall literacy rate for women regarding education increased from 0.2 % in 1882 to 6% in 1947[6]. In India, particularly western school’s were open to girls in 1818, secondary education in 1849 and college courses in 1875. A large gap in male and female schools signifies backwardness and may be associated with lower economic growth.

Therefore, it is clear that we have come a long way from discrimination, but it is critical to note that complete democracy and peace cannot be attained unless equal rights and chances for women are provided.

REASONS FOR DISPARITY AND THE GENDER COUNTERPARTS AFFECTED

One of the main reasons for gender imbalance is uneven access to education. One-fourth of young girls and women aged 15-24 do not finish primary school, which makes up 58% of the population[7]. Of all the illiterate people in the world, about two-thirds are women. This unequal disparity affects the opportunities for women in the long run.

Only six countries give women the same legal work rights as men, which causes a domino effect on the lack of employment equality. 90% of women take responsibility for unpaid labour, whereas 22 % of women participated in employment compared to 71 % men, and hence job segregation plays an important role. The lack of legal protections causes places to become unsafe and unprotected, causing women to compromise and limit their goals.

Lack of bodily autonomy, poor medical care, lack of religious freedom, lack of political representation by 25 %, racism, societal mindset; the reasons are endless. Though impacts for women have been specifically mentioned, these reasons impact all genders without mainstreaming any of the genders, in particular, leading to a lack of representation.

Gender equality means that men and women have equal power and equal opportunities for education, financial independence and personal development. Gender equity is the process of being fair to women and men. Ensuring fairness includes proper strategic measures that must be available to compensate for women s historical and social disadvantages that prevent the genders from starting on a levelled field. [8]Equity thereby leads to equality. Women empowerment is an expository aspect of achieving gender equality.

Despite the common problems facedsuch as gender violence, stereotypes, shaming, migrant and refugee crisis with separate treatment for separate genders etc.,the variant issues dealt with women, men and the other genders are explained respectively.

One of the disappointing marriage traditions is the concept of dowry in the present times, which is a key issue to gender inequality faced by women. Why do the parents of a girl child need to pay the groom family money to keep her safe? Marriages have now become material negotiations. The suicide rates of girls due to domestic violence has increased tenfold[9]. There are subtle societal ideas pertaining to a patriarchal society, such as male-dominated surnames, family obligations, and, most importantly, media representations of gender stereotypical normsand embedded sexism that influence our thinking.In most areas, women are treated as a liability, whereas men are treated as assets.

Gender imbalance for men reverts to toxic masculinity where men from a young age are taught that crying doesn’t make someone “manly”. Crying is an expression, and men expressing their emotions are not a sign of weakness. Why is it so easy to hear the word housewife but not the word househusband? Men can be feminists, too, for feminism stands for equality and not just protecting women.Hence, it is brought to light that men must channel support to campaigns such as the White Ribbon Campaign, the world’s biggest campaign that engages men in fighting violence against women.

It is not just women and men who face inequality issues, but the LGBTQ community faces immense challenges. Whether receiving an education or pursuing their dreams in jobs, entertainment, news, politics[10], they are not treated with the respect and dignity they deserve. It is drilled into our heads that pink is for girls and blue is for boys from a very young age, but what about all the colors between? Harassment and gender violence is rooted in a heterosexist ideology, and it can be concluded that changes must be brought to broaden the social structure as gender has diversified itself.

REPRESENTATION OF GENDERS IN THE LEGAL FIELD

Though the fights of the justice system continue, the genders have received a fair share of their posts. Joyita Mondal is a 29-year-old transgender woman who recently became the first transgender judge of Lok Adalat[11]. Women’s representation is very low as only 5.08% of the women are in the legal profession in India[12]. Even the 34-member supreme court has only four members – the highest it’s ever seen. There have been only 11 women, Supreme court judges, in 71 years.[13] Men have the upper hand in the legal field, but the statistics overshadow the challenges they face. Hence, it is to be noted that there is immense hope for the development of all genders in the legal profession, hoping to achieve feminist courts and posts based on capabilities and not genders.

SOLUTIONS TO CREATE EQUALITY AMONG GENDERS

To conclude, the genders-in-equality must be a forum showing equality through actions.Everyone must work to achieve Goal 5[14](gender equality)of the 17 SDGs of the United Nations.Awareness must be brought to ensure gender equality, equity and empowerment are achieved.In my opinion, sustainable solutions to reduce the gender gap are to stimulate full autonomy and independence through education and lifelong learning, equal rights to participate in society and equal sharing of family care. This brings about a paradigm shift in the stereotypical private and public images on the role of gender. Gender diversity is necessary to improve outcomes, and a comprehensive approach must be addressed regarding gender inequity through a shift in national and international policies.The world changes only when a single person starts to change, and genders must be treated as allies and not enemies.So the question is; Are we ready to make the world more equal?