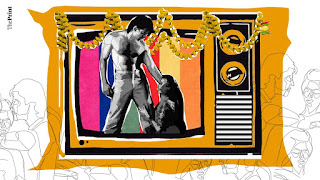 Gender-based Violence (“GBV”) refers to harmful acts committed against someone because of their gender. It is a serious violation of human rights and a health and protection problem that endangers life. According to statistics, a third of women suffer from sexual or physical violence at some point in their lives. It can take many forms, such as intimate partner violence, sexual violence, child marriage, and female genital mutilation. GBV includes sexual, physical, mental, and economic injuries committed in the public or private spheres. GBV has serious effects that can last a lifetime and even cause death in some rare cases.

One way to understand GBV is to analyze daily soaps, movies, and web series that deal with GBV. Indeed, it is a comprehensive area to study. To limit the scope, in this essay, the concept of GBV will be explored with context to the content that is demonstrated in the Indian Cinema (Bollywood) and how these representations influence your imagination and shape your mind creating a mindset that is tarnished with the feelings of violence and sex. In the due course of this essay, it will be depicting how the Indian Cinema has normalized GBV in the reel world for entertainment purposes.

Most people think of movies as a source of entertainment. If we consider cinema as a means to circulate information like the other types of communication media, we will find that cinema is a vehicle of social change. It is not only a piece of art, but also a powerful tool to convey contemporary human emotions and social concepts. Observers have believed that movies will have a huge impact as soon as they are released.

Despite increased interest in movie reviews, film studies have remained largely unexplored. While there have been a lot of movies already presented to the public, not many movies have resulted in important insights about the nature of movies and their function in society. Contemporary films have urged us to consider those areas of life which shouldn’t be normalized, thereby, perhaps don’t feature social issues as prominently as they did in the Old Bollywood.

Right from the start of the Indian Cinema, the Hindu tradition and beliefs are clearly portrayed in the films. Films like ‘Raja Harishchandra’ portrayed mythology during the silent era, and afterward came films based on drama fantasy elements and melodic tunes. In the 1930s, there was a mounting interest in social issues that affected everyday life. However, by the 1940s, a winning strategy for box office success had been developed, which included songs, dance, stunning imagery, rhetoric, and imagination.

Music and songs became the vibrant elements of filmic experience. In the 1950s, the issues of nationalism, independence and ethnic and religious visions appeared as prominent themes. By the 1960s, cinema had switched its attention away from social issues towards more romantic musicals, westernized themes, flashy acting styles, and dance routines. The 1970s saw the emergence of low-budget film genres. The 1980s saw young filmmakers creating films with sophisticated elements on the harsh realities of society.[i]

The 1990s-present which is also considered as “New Bollywood” depicted extravagant romance, prosperous lifestyles, and shooting in fancy locations that contained scenes of GBV without any trigger warning.

Starting from Main Hoon Na (2004), where a female was forced to wear makeup just to get noticed and subsequently Cocktail (2012), in which a man rejects his modern friend just because of her traditional friend. The husband in English Vinglish (2012), used to repeatedly scold and humiliate his wife.

Badlapur (2015), an award-winning movie, portrayed a scene in which the protagonist rapes the girlfriend of one of the men he’s after. Then we wonder why girls, females, and women are always being raped and are not safe anywhere!

Kabir Singh (2019), where the protagonist is portrayed abusing his girlfriend, Preethi, while claiming to love her. Further, he threatens to rape a woman and approaches his domestic help violently.

Bulbbul (2020), a film that subtly encourages you to think beyond what you see on screen. It is a horror-themed film that contains all the forms of GBV and provides us a thorough picture of the elite Bengali household and its vulnerabilities.

In short, the New Bollywood has countless movies that include GBV in it without any warning. Whereas, on the other hand, the audience should also understand that the scenes which include GBV or any kind of violence should be minimized as it will show negative behavioral outcomes in the coming time especially in the youth.

As a result, in a country like India, where superstars inspire everyone, should portray such scenes with extreme caution and sensitivity, and instants involving violence against children, women, and LGBTQ people should be avoided.

Bollywood films have always been criticized for almost ignoring the issues of gender. The LGBTQ community’s image is tarnished, and the creators ignore taking LGBTQ people in the ordinary films. People who are identified as LGBTQ are either cast as villains or mocked at. Examples are Dostana (2008), Kanchana (2011), Laxmii Bomb (2020) and many more.

Bollywood films portray females as physically frail and psychologically weak. In most of the movies, women are portrayed either as victims who are too naive to understand that they are in danger or cunning vamps who speak out boldly and provoke the criminal into committing a crime.

Young ladies and girls are shown as people with only one ambition in their life: to marry someone who will pay for all of their extravagant habits. Most mainstream movies depict a man and woman falling in love and then either marrying or being jilted for money or family prestige.

These stereotypes help the creators to minimize the impact of GBV, by implying that the female and LGBTQ community deserve this and should now deal with the repercussions of their actions silently. The reel world has normalized such content in the name of general entertainment and is paving a way where there will be a huge gap between the reel and real world. As a result, there is indeed a great demand for a body to interfere and govern which films should be shown to the public.

Recently, BCCC has asked “TV channels to exercise necessary prudence and caution while scripting, filming, and editing scenes portraying gender-based violence.” Further, it added that the “Disclaimer” should state, “Gender-based violence is a penal offence. This channel does not support any form of GBV or abuse of any nature.”[ii]The self-regulatory body emphasized more on the message that violence is illegal and unacceptable and this message must be clearly conveyed to the audience.

After the advisory issued by the BCCC, there is a ray of hope that the creators who indulge in creating and making such content will abide by the guideline and will avoid portraying important social issues just for the entertainment purpose. Now let’s have a look at those films where women played a major role and were not merely used as a side character who was either cast as victim or were just simply used as an ornament for home or subject to fun.

The Strong Portrayal of ‘Her’

Mary Kom (2014), based on the real-life story of an Indian fighter who achieved international acclaim for India. It’s a noteworthy picture to watch because it depicted the challenges faced by Kom during her career. This movie clearly portrays a message that women can do whatever they want to do even after their marriage.

Neerja (2016), based on the true story of a flight purser who was shot and killed while ensuring safety of hundreds of passengers on the hijacked Pan Am Flight 73.

Lipstick Under My Burkha (2017), is a coming-of-age film concerning women’s sexuality. It’s a daring movie that serves as a mirror to the current phase.

In a limited scope, movies have normalized such content in the face of general entertainment. The juvenile watches these types of contents without a constraint on a stable internet-connected device like laptop, smart TV, phone, tablet, etc. If there is no restriction on the display of such violence and abusive content, then the mind of the current and the upcoming generation will be corrupted with the feelings of violence and sex.