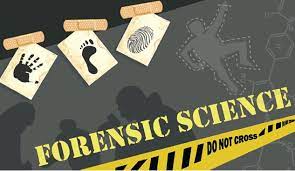 The Code of Criminal Procedure, 1973 and The Indian Evidence Act, 1872 discuss the various provisions to be followed in criminal cases specifically. They also solidify its legal validity and recognize the very contribution of Forensic Science in Crime detection. Forensic Science requires a scientific inquiry supported by adequate evidence and diligent investigation. There are various genres under this domain which further facilitate this mode of inquiry in day to day cases involving the application of forensic science. When we try to visit the alibi of the crime committed, the investigator and the court itself has to find a way through the physical evidence present at the crime scene.

Forensic Science as a field is mother of innumerable facets that aid in the justice delivery system particularly in context to Criminal Law. Ranging from subjects such as Crime and Investigation methodology, DNA profiling, Forensic Ballistics to Forensic Linguistics, encompassing the Linguistic Fingerprint, Articulatory Phonetics, Forensics play major role in unfolding the hidden clues that further pave the way towards a reasoned judgment regarding any crime. As law requires a decent amount of evidence before any judicial decision over a crime committed, forensic science helps the authorities in finding that piece of evidence.

Almost all the jurists consider this saying –“It is better that ten guilty persons escape than that one innocent suffer”.[1]This saying in one line sums up the entire relevance and contribution of forensic science in determining the truth somewhere hidden in the shadows.

·         Forensic Pathology- This branch highlights most of the requisite features that one needs to inquire from a dead body. Autopsies, Post Mortem are some of the scientific inquiries that are conducted to understand the details about the death. Such as the time of death, the cause of death, further simplifying the path for determining whether it was a criminal act or not.

·         Forensic Anthropology- It employs physical anthropology techniques to investigate crimes by examining skeletal, decomposing, or otherwise unidentified human remains.[2] It also aims at finding the unique features of the body such as sex, height, age, the span of decomposition, etc.

·         Ballistics- The type of firearm used (if any) while the commission of crime can be identified by the ballistics report and other details associated with it, such as gun powder, shell casings, bullets, etc.

·         Digital Forensics- All kinds of digital evidence found; falls under this category. Ranging from Mails, SMS, Social Media Chats, Cloud Storage, Images, and even the devices such as computer, laptops, mobile phones, etc. This type of forensics can also be further aided by forensic linguistics in certain matters. Where the Linguistic Fingerprint, Phonetics can also contribute to the criminal justice system.

·         Toxicology- It helps us to identify if the body (dead/ living) has any kind of drug, poison or alcohol administered into it (voluntarily/ involuntarily). These scientific mechanisms kind of aid in the cases where the cause of death is due to certain kind of poison found in the body of the victim.

·         Jurisprudence- Jurisprudence is also considered the philosophy of law. Sometimes the interpretational aspects of law can further assist the counsel in finding the crime related details. For example, Medical Jurisprudence is a vast subject and needs to be read thoroughly in order to form a co relation with the medical reports presented before the court as a part of investigation conducted in various forensic science institutions.

·         Odontology-It is a scientific fact that the hardest part of body is enamel and it tends to sustain even after catastrophic events. [3]So, the teeth can be used to get the identity of the person. In another words it can also be considered as the “Forensic Dentistry” in criminal justice cases.

·         Criminalistics-When we think of forensic science as a domain, this is the broad scope that comes to mind. It contains fingerprints, blood traces, firearms, and other recognisable evidence discovered at the crime scene.

·         Psychiatric and Behavioural Sciences- It is a soft branch of Forensic Science which makes efforts in understanding the behaviour of the criminal and the journey of his psyche from that of a decent being to one with a criminal mindset. They also dig into the pre existing behaviour of a selected group who the authorities find suspicious and have the capacity to commit that specific crime, facilitating the investigation to reach a reasonable, scientific conclusion backed with strong evidence.

·         Scene of Crime- “It is said Dead speaks louder than Alive.” It particularly refers to the place of commission of crime and also includes the physical evidence found on that specific place. Sharp observation with forensic tools at scene of crime reveals much strong evidence about the Nature/ Time of crime/ Perpetrator of crime.

·         In Dharam deo yadav v. State of U.P, A DNA sample from the skeleton of a 22-year-old girl matched her father’s blood sample. On the basis of circumstantial evidence, the accused was found guilty. The court emphasised the need of employing scientific approaches in criminal detection to protect the judicial system from low conviction rates in its judgement. The importance of bettering forensic science for crime detection was also emphasised.[5]

·         In Ram Nathan vs State of Tamil Nadu, The accused was found guilty of murdering two people by shooting them. The issue of rejection of the ballistic report, as well as other grounds, were examined in the appeal. The Supreme Court ruled that it would be unjust to dismiss an expert’s conclusion based on the fact that he did not think it was necessary to take images of the markings under a comparison microscope.[6]

4)      Rare Initiative by M.P. High Court in the field of Forensic Sciences-

·         In a reformatory move, the Madhya Pradesh High Court took into consideration the case of a Bail Applicationto give the state a campus of National Forensic Sciences University which would support the criminal law machinery in the state by bringing one of the most sophisticated institute in for testing the criminal cases that require a scientific mode of investigation for assisting the investigation and judgment with a reasoned order backed by evidence.

·         And “Reasoned Order” is one of the elements of Natural law principle. This prudent realization that various branches of Forensic Sciences such as DNA, Fingerprints, Ballistic reports, CCTV Footage, Data Retrieval, etc. need a scientific mechanism to govern the cases related to criminal law in the state, is what is makes it a rare initiative.

Disadvantages due to lack of such scientific mode of inquiry–

Ø  Unutilized Potential– If we analyze the realities of some states, we find that due to absence of ‘Rule of Law’ the hidden potential of the states have remained unutilized.

Ø  Pendency-Due to the absence of such an institute the pendency of cases has constantly increased and put the criminal justice delivery system in a tough spot.

Justice Anand Pathakmade it clear that regular training programmes of Police Officers/ Public Prosecutors/ Judges should be conducted for increasing the efficiency of criminal justice delivery system and for improving the administration of justice.

·         Accuracy-It would certainly increase the efficiency and accuracy of judgments, because a complete scientific report would increase the capacity to judge the cases in a prudent manner, backed by appropriate evidence.

·         Speed– It would also speed up the justice delivery in criminal justice system. Even if we take the case of M.P., the Forensic report takes one and a half years, which after the coming of this campus would reduce to 2 months or so. This would be a reformatory step and would raise the faith of a common person in the institution.

·         Regular Training Programmes– It would help and guide officials of public administration such as police officers and people related to justice delivery system such as public prosecutors, magistrates, even at times High court judges, to meet the challenges of time.

·         Expansion of Intellectual Horizon– This would be a departure from traditional courses and would move to next level where teaching of new courses would create new intellectual workforce updated with latest technology and challenges faced by mankind in present era.

·         Employment Generation– This would further precipitate police reforms with a requirement of Ballistic experts, Digital crimes experts, experts of Scene of Crime in every district, even at every police station in coming years. This would generate more employment opportunities for more professionals in teaching and its allied colleges and digital and cyber experts would be in demand for private industries and corporate world.

·         The sub-committee also vouched for allotment of 50 acres land for establishing the campus of National Forensic Sciences University.

·         The order of this copy was sent to different officials of bureaucracy, public administration and justice delivery system such as Director, Forensic Sciences Laboratory, Additional Advocate General, and Additional Director General Cyber Crimes, etc. for recommending the implementation of the campus of National Forensic Sciences University.

·         The trend of witnesses turning hostile is on the rise. Ergo, forensic reports – DNA/ Ballistics/ Call Detail Records especially in rape or murder cases would assume importance to accord conviction to the guilty person.

·         Seeing the recent turn of events due to the Pandemic, the reorganization of Scientific/ Technological/ Digital Infrastructure became a harsh reality.  Similarly the evolved nature of digital crimes, the need of forensic linguistics needs to be countered with a developed scientific mode of inquiry. This objective seems to be furthered by the recent initiative.

For summing up the entire move, court, in a visionary manner, expressed that-“Rule of Law cannot be at the mercy of Archaic method of investigation.”[9]

[1] William Blackstone, Commentaries on the Laws of England, Clarendon Press at Oxford, Last Visited on Jan 6, 2021