India which is the largest democracy of the world is governed by a written constitution. The Constitution of India is the highest law of the land and in accordance to which other laws are set. India being a secular, democratic and republic nation hold its people most important and thus through the constitution it guarantees certain rights to its citizens to protect them from the arbitrary acts of the legislature. 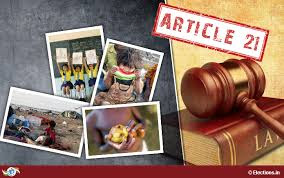 Article 21 of the Indian Constitution lays down the one of most important fundamental right which guarantees right to life and personal liberty to all persons, citizen or alien. But a person can be deprived of the same by a procedure established by a law provided the procedure must be fair, just and reasonable. However in the beginning there has been a lots of confusion over the scope of the Article 21 and in the meaning of the phrase ‘personal liberty’. These confusion were later cleared by the Supreme Court by landing series of judgements in different cases.

For the first time in the case of A.K Gopalan v. Union of India[1], the meaning of the word “personal liberty” came up for consideration of the Supreme Court. In this case A.K. Gopalan, a Communist Leader was detained under Preventive Detention Act 1950. The validity of the said act was challenged on the ground that it is violative of his right to freedom of movement under Article 19(1) (d) which is the very essence of the Personal Liberty guaranteed under Article 21 of the Indian Constitution. It was also argued that “procedure established by law” in Article 21 has the same meaning as the “due process of law” of the American Constitution, therefore similar to American ‘due process’ it also includes principles of natural justice.

Rejecting the contentions of the petitioner, Supreme Court agreed to definition given by Prof. Dicey and held that the ‘personal liberty’ in the Article 21 means nothing more than the liberty of the physical body, i.e., freedom from arrest and detention without the authority of law. The majority took the view that Article 19 and 21 deal with different aspects of ‘liberty’. Article 21is guarantee against deprivation of personal liberty while Article 19 affords protection against unreasonable restrictions on the right of movement. Supreme Court interpreted the ‘law’ as the state made law and the plea that the term ‘law’ in Article 21 include jus natural, i.e., principles of natural law.

Preceding to this in the case of Kharak Singh v. State of U.P.[2], rejecting its previous view in of Gopalan Case Supreme Court held that the expression ‘Life’ was not limited to bodily restraint or confinement to prison only but something more than mere animal existence. In this case, Kharak Singh, the petitioner has been charged in a dacoity case but he has been acquitted due to lack evidence. But he has been kept under the police surveillance under U.P. Police Regulation because police opened a history sheet for him. Police surveillance included secret picketing of his house by the police, domiciliary visits at night and verification of his movements and activities.

It was held that domiciliary visits of the policemen and unauthorised intrusion into petitioner’s home is the violation of the personal liberty of the individual, and hence the Police Regulation authorising domiciliary visits was plainly violative of Article 21. However this view was later declined by the Supreme Court in the case of Govind v. State of M.P.[3], and held that these regulations were framed under Police Act and therefore it has force of law and thus they are valid.

With his decisions in the Gopalan, Kharak Singh and Govind’s case Supreme Court tried to give new dimension to the scope and meaning to the word ‘personal liberty’ in Article 21, but the major development in the field has been seen in the case of Maneka Gandhi v. Union of India[4]. In this case the passport of the petitioner was confiscated by the Central Government under Section 10(3)(c) of the Passport Act, 1967. The act authorized the government to do so if it was necessary in the interest of the general public and through the same the central government has declined to furnish the reason for its decision. The petitioner challenged the validity of the aid order and the provision of the following grounds:
1. That the section 10 (3) (c) is violative of article 14 as it does not provide for right to hear to the passport holder before the passport was impounded.
2. That the section 10 (3) (c) is violative of article 21 as it does not prescribe ‘procedure within the meaning of the article 21.
3. That section 10 (3) (c) is violative of article 19 (1) (a) and (g) since it permitted imposition of the restrictions not provided in the Article 19 (2) & (6).

The Supreme Court held that the order of the Government for impounding the passport of the petitioner was unreasonable and was not able to be justified. Delivering the majority judgement Justice Bhagwati held that the procedure envisaged in Article 21 should be fair and reasonable. This principle of reasonableness which is an essential element of Article 14, has suffused article 14 ubiquitously.

Also the procedure envisaged in article 21 must answer the test of reasonableness in order to be in conformity with article 14. The power conferred upon the passport authority to impound passport under section 10 (3) (c) of the act is a quasi-judicial power and therefore the rules of natural justice will applicable to it. Therefore the order withholding the reason for impounding the passport was not only in breach of statutory provision but also violates the principle of natural justice embodied in the maxim audi alteram partem.
With his decision in the Meneka Gandhi case the Supreme Court has finally laid down following test for the Article 21:
1. There must be a valid law.
2. The law must provide a procedure which must be fair, reasonable and just.
3. The law must satisfy the requirement of Article 14 & 17.