India has a shocking trend where 20 women die every single day as a result of harassment over a dowry either murdered, or forced to commit suicide. But why is the dowry system still prevailing since olden times? Why do we value a woman only when she brings dowry? Why do women are treated as hell when they don’t bring dowry? Questions like these need to be raised again and again. 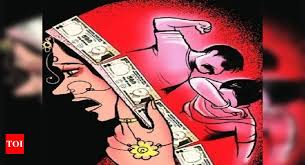 A young man, who asks for dowry not only discredits his education but also dishonors the respect of his wife and country.

Dowry has been criminalized by law as early as 1961. Nonetheless, it still plays a significant role in Indian marriages. It is demanded openly despite of several dowry prohibition laws and so much of women empowerment. National Crime Bureau of India, within the recent past in 2017, recorded nearly 7000 dowry related deaths. They jumped from about 19 per day in 2001 to 21 per day in 2016 where about many of those go unreported. The vicious reality of the dowry system is not only the story of rural areas. Even the sophisticated families sitting in metropolitan cities are harassing women for not bringing enough gold or money.

What is Dowry system?

In some cases, to escape the punishment, the husband and his family do not kill the woman directly but harass her mentally and physically forcing her to commit suicide. A similar case was reported in Kerala in 2019 when a 27-year-old woman was starved to death by her in-laws because their demand of dowry of two lakhs was not met.[i]
The first and foremost law relating to dowry came in 1961 as The Dowry Prohibition Act, which gave a clear meaning to the term dowry by defining it under section 2 and prevented giving and receiving of the same.

What is Dowry Death?

Section 304B of the Indian Penal Code,1860 provides for the clear meaning of dowry death and presumption as to who caused such death.

If a woman dies within seven years of her marriage by any burns or bodily injury or in any unnatural circumstances and it is revealed that before her marriage she was exposed to cruelty or harassment by her husband or any other relative of the husband in connection to demand for dowry, then it will be presumed that such husband or relative have caused her death.
Punishment for dowry death is a minimum sentence of imprisonment for seven years but which may extend to imprisonment for life.

Section 113B of Indian Evidence Act,1872 also provides that if the death of a woman is caused under abovementioned circumstances then the court shall presume that such person has caused her death.

The offence U/s 304-B is;
· Cognizable,
· Nonbailable,
· Non- compoundable and
· Tribal by Court of Session
Essential elements:
In the case of Pawan Kumar v. State of Haryana,[ii] the Supreme Court has laid down that the ingredients necessary to attract Section 304B of Indian Penal Code are:

Other relevant sections that lead to cruelty and harassment of a woman wherein the husband and relatives of husband can be booked under Indian Penal Code are;

Corpus delicti is a Latin term which means a fundamental fact required to prove that a particular crime was committed. In case of Dasrath v State of Madhya Pradesh,[iii] the Supreme Court held that absence of corpus delicti does not vitiate conviction of accused for dowry death.

In case of Inder Raj Malik v. Sunita Malik,[iv] the Delhi High Court held that if a person is convicted under section 4 of Dowry Prohibition Act,1961 and section 498A of Indian Penal Code,1860 then it does not attracts the provisions of double jeopardy under article 20(2) of Indian Constitution. The prohibition of Dowry Prohibition Act and Indian Penal Code is different from each other as former enactment makes demand of dowry punishable but where cruelty is not necessary whereas in the later enactment cruelty is a necessary element for becoming a crime under section 498A.

In Gurbachan Singh v. Satpal Singh,[v] the Supreme Court held that in cases where the death may not be affected by the husband or his family directly, but as long as the death results from the cruelty inflicted by them i.e. if they create any mental pressure upon the bride, the case will be of a dowry death.
In State of Andhra PradeshV.Ram Gopal Asawa & Another,[vi] the court held that there must be and proper connection between the death of the woman and effects of cruelty based on dowry demand.
In case of Niranjan Mohapatra v. State of Orissa,[vii] the hon’ble court held that the contiguity between time of claiming ill-treatment and the time of death is another vital factor that is made a necessary evidence for proof of dowry death.