The Uniform Civil Code has nothing to do with Indianisation or national integration or interfering with the religion of one community or the other. It is simply a question of equal facility of laws to all sections of our people. (A) ll people of India in all matters – except ~ the matter coming under protective discrimination should be governed by one set of laws.[1] 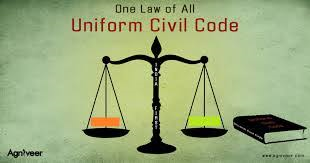 The advocacy for the Uniform Civil Code is based on the predominant call for “One Nation, One Legislation.” India, under its colonial regime, had witnessed the codification of all its major laws such as contracts, transfer of property,criminal laws, civil laws,etc.by the British Rulers. These laws were subsequently framed by the British, who acknowledged India’s rights concerning its religious matters. This is the reason as to why India is still struggling in its battle for a common personal law even after 73 years of Independence. These personal laws have a considerable role in governing a citizen’s lifestyle with regards to their marriage, family, succession, etc. The ideal of uniform civil code was a significant bone of contention between the framers of the Constitution as it was a politically sensitive issue.

After arriving at an honorable compromise, the Uniform Civil Code was added under Article 44 as a directive principle of state policy by the founding fathers of the Constitution. Nehru said in his 1954 speech in the Parliament, “I do not think at present the time is ripe for me to try to push it (Uniform Civil Code) through.”[2] They were hopeful of the Code getting implemented whenever India as a nation would be ready for it. It was accordingly included in part IV of the Constitution of India as an honorable compromise which lays down that, “The State shall endeavor to secure for the citizen a Uniform Civil Code throughout the territory of India.”[3]. Article 44 of the Constitution of India advocates for a Uniform Civil Code for the Citizens of India to ensure national integration and unity. India, as a secular country, consists of a wide permutation and combination of personal laws of Hindus, Muslims,Christians, and the Parsis. The urgent call for a Uniform Civil Code is marked by the presence of many prejudicial and iniquitous personal laws and the absence of a single statutory book that would be universally acceptable to all religious communities who co-exist in India. India must reconstitute the personal laws which have been the brainchild of outdated and regressive scriptures, statues, myths, and customs, which have proved to be a major hindrance in India’s endeavor for a progressive and advanced community. Religion is the essence of a human being’s existence, but letting a religion govern laws for its community members can be detrimental to the country as a whole. The formula of the Uniform Civil Code would be efficacious in ensuring uniformity and suppressing the evils which have bridled our existing personal laws. The principle of UCC is closely interlinked with the doctrine of secularism and gender equality in law and therefore has to be analyzed in great detail. The incessant conflict in the interpretation of these ideals of secularism has resulted in glorifications as well as criticisms of the implementation of the Uniform Civil Code.The principle of UCC has been perceived by many as anti-secular, while many have acknowledged it as a precursor of communal harmony and gender equality. The implementation of the Uniform Civil Code has been strongly detested on the grounds of secularism and freedom of religion enlisted in the Constitution of India. India has been accorded the status of a ‘Secular Democratic Republic’ which abhors discrimination on the grounds of religion. A secular state symbolizes equal respect and tolerance for all religions. However, this religion must prevent itself from interfering with the prosaic life of its citizens. It is, however, absurd to note that certain personal laws violate these principles and are proved highly discriminatory against women. It is disconcerting to witness women fighting for a gender code to demand equal status and justice even when they make up nearly half of India.The Uniform Civil Code is required not only to ensure (a) uniformity of laws between communities but also (b) uniformity of laws within communities ensuring equalities between the rights of men and women.[4] The Supreme Court of India has been a staunch supporter of the UCC, as depicted by its various landmark judgments. The court took a stance for Uniform Civil Code for the first time in the case of Mohammad Ahmed Khan v. Shah Bano Begum,[5] where uniform law came at loggerheads with the various personal laws. This case occupied a landmark position in the history of debates on religion and gender justice where the Supreme Court brought a Muslim woman divorced by the husband through triple talaq under the section 125 of the Crpc and upheld her right to claim maintenance from her husband even after the completion of the iddat period.The Apex Court also made a substantial commentary on Article 44 during the judgment of this case, stating that “It is also a matter of regret that Article 44 of our Constitution has remained a dead letter.” This decision drew widespread criticism and condemnation from the Muslim fundamentalists for it being against the provisions of Islamic law. Still, it was a progressive step towards the liberal interpretation of the law, which promoted gender justice. However, the Central Government later enacted the Muslim Women’s (Protection of rights on Divorce) Act 1986, which diluted the judgment in the Shah Bano case by granting maintenance to the divorced woman only for the period of iddat, or till 90 days after divorce. This Act exposed the depressing condition of the women’s rights in our country, which was considered a petty issue over the autonomy of a religious establishment.

Another major issue concerning the validity of personal laws is their discrimination on the grounds of religion, which is certainly prohibited under Article 14 of the Constitution. The demand for a Uniform Civil Code rises due to the discrimination in the laws of the country through which one Act is deemed unconstitutional and violative of human dignity for a particular section of women. At the same time, the same is declared as constitutional for another section as allowed by their personal law. Similar inconsistencies were noted in the case of the State of Bombay v. NarasuAppa Mali[6] where the question was with regards to the determination of Constitutional validity of the Bombay (Prevention of Hindu Bigamous Marriages) Act, 1946. This Act was held violative of Article 14 and 15 on the grounds that the Hindus were wholly prevented from the practice of bigamy.
In contrast, the Muslims were granted liberty to contract more than one marriage under the Sharia Law. Therefore this particular law was construed as discrimination on the grounds of religion. These controversies arose mainly due to the absence of a common civil code. However, in the eyes M.C Chagla, these acts weren’t a violation of any fundamental right, and he stressed on the different historical, cultural outlook of the Hindus and Muslims, which justified the difference in their religious practices as well. He prohibited people from looking at the Act through the lens of religious discrimination.
In a Uniform Civil Code, which is the cherished constitutional goal, if we have a single ground of divorce viz. that the marriage has broken down irretrievably, the scope of any controversy is ruled out.[7] Time and again, the Law Commission of India and the Supreme Court have made various recommendations to the Parliament with a proposition to make an irretrievable break down of marriage as a separate ground for divorce. In 2008 the Law Commission of India recommended that “It is, therefore, suggested that immediate action be taken to introduce an amendment in the Hindu Marriage Act, 1955 and the Special Marriage Act, 1954 for the inclusion of “irretrievable breakdown of marriage” as another ground for grant of divorce.”[8] In almost all the cases portraying a conflict between various personal laws, women have been held as the victims of torture in the garb of religious immunity. This has been due to loopholes present in the respective personal laws which widen the gap of inequality between men and women in matters of divorce, marriage, and succession.
The Supreme Court ruling in the case of Seema v. Ashwani Kumar[9] could be verified as its first step towards a uniform civil code. In this case, the Supreme Court emphasised on the compulsory registration of all the marriages irrespective of the religion of the parties to a marriage. Christian women have been troubled for a long time due to their law provisions on adultery as it acts as a valid provision the males seeking divorce from their female counterparts. On the contrary, women had to establish an additional charge like desertion or cruelty under the Indian Divorce Act 1869. But a major development for them was made in the year 1997 when cruelty, physical and mental torture was held as valid grounds for divorce.
One of the major enigmas surrounding the implementation of Uniform Civil Code throughout the territory of India and has invasioned the sentiments of people as well is its explanation as provided in Article 44. The provision has been framed with great caution as it calls upon the state to “endeavor” to secure such a code.This provision clearly doesn’t depict an urgent and a time bound situation which demands immediate attention. Raging controversies demanding for UCC have been subsided due to the pressure of various religious communities, but it must be understood that for the promotion of national unity and integrity, a unified code is essential.The code would act as an umbrella imersifying all streams of religion under one head. Only then would the true spirit of securalism emerge in our nation where a unified code of all family laws would grow and develop together.