Uniform Civil Code is one of the most debatable issues among the various religious communities in India. It is argued that UCC is a step towards secularism and a means to promote national integration so that all communities in India can live peacefully despite having different religious backgrounds and ideologies. The citizens in our country are governed by personal laws based on caste; religion etc and the UCC include all the personal laws of every religion. In this context matters like marriage, divorce are governed by personal laws. 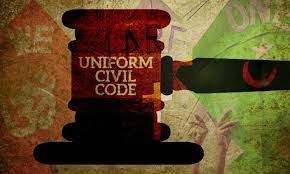 India being a secular country is lagging behind in terms of gender equality. Women in India under every religion suffer from discrimination in aspects of marriage, divorce, inheritance etc. This is where the idea of having a common civil code arose in the picture.
The issue of Uniform Civil Code gained worldwide importance due to a petition filed in the case of Triple Talaq. The demand of UCC is normally made by women as a substitute for existing personal laws. Seventy years after we attained independence, equality still remains an unachievable goal for many of us. After years of heated arguments and debates about the implementation of UCC, the result is no outcome. But there is no denial in the fact that there can’t be gender equality till India adopts UCC which protects the rights of women.
Now let’s understand what Uniform Civil Code actually is and why India is in need of such civil code.

What is Uniform Civil Code?

Uniform Civil Code is provided under Article 44 of the Indian Constitution which comes under Directive Principles of State Policy. UCC places a collection of laws to manipulate affairs of all citizens regardless of their religion. In other terms it means one nation, one rule.[i] The common areas covered by UCC include laws related to acquisition and administration of property, marriage, divorce and adoption.
UCC is a combination of three terms, Uniform; Civil; Code. Uniform means the same in the similar situation; Civil means Citizens and code means Codified laws. Thus the concept has two aspects-[ii]

● firstly to have uniform law for all communities
● Secondly to have similar laws for all and similarly should be regarding equality and gender justice.

Goa is the only Indian state which has a set of civil laws that governs its residents irrespective of their religion, ethnicity etc. The Goa Civil Code or Family law is mainly based on Portuguese Civil Code of 1867. The law provides for equal division of income and property regardless of gender. This law is also applicable in Union Territories of Dadra and Nagar Haveli and Daman and Diu. The Portuguese may also play a significant role in implementing a uniform civil code in India.

India has always been a place of many colors and before independence; it would have been hard to point out what constituted India. It was known even at that time that to further unite India and make it a truly secular nation, we would need a uniform civil code. But even after so many years of independence, we haven’t been able to enact any such code.
One of the reasons behind the UCC not being implemented yet is political will. Politicians have always found it beneficial to play vote bank politics and try to appease different groups instead of attempting to integrate our nation.
Now let’s talk about the reason why we need a Uniform Civil Code.

● Promotes Real Secularism- In India people are following and preaching selective secularism and they are very far from real secularism. A UCC means that all the citizens have to follow the same laws which are a much fait concept. It will help people to realize what real secularism is.
● Personal Laws: A Loophole- Personal laws are subject to various loopholes which are constantly being exploited by those in power. By allowing personal laws we have constituted an alternative judicial system and old values still operate in the country. A uniform civil code is expected to change that.
● Help in reducing Vote Bank Politics- Politicians often indulge in vote bank politics at the time elections. If all the religions are covered under a single law, politicians will have less to offer to certain minorities in exchange of their votes.

The implementation of uniform code and the issue of gender justice are closely connected to each other. Women empowerment in core areas like gender bias, social status, health and security are of urgent necessity. There is no UCC in India but a uniform criminal code exists which is equally applicable to each citizen irrespective of their religion. However in the case of personal laws, there is no uniformity. The law related to marriage, divorce is different for different religions. Thus a uniform civil code will help the cause of national integration.

Government needs to consider gender justice as the ultimate goal. The centrality and the power of the compulsory heterosexual, patriarchal marriage and damage it can do to women, is what must be mitigated. India still holds outdated passive laws. These laws head to domination leaving no space for women in a progressive Society. The whole concept of UCC is not against any particular religion but to prevent oppression in the name of religion.

Earlier when Article 44 was introduced in the Constitution, several Muslim members objected as they thought that their personal rights might be abrogated. However this objection was met by pointing out that UCC would promote national unity. Reference to this discussion can also be made to Article 25 which guarantees Freedom of Conscience and profession, practice and propagation of religion. The approach of Judiciary can be well appreciated at this juncture.
In the case of Shah Bano Begum[iii], the Supreme Court stated that divorced women can claim maintenance under Section 125 of Cr.P.C from her husband who divorced her.
Sarla Mudgal Case[iv] is another pertinent case which underlined the need of UCC in India. In Sarla Mudgal V. Union of India, a Hindu husband who was married under Hindu Law embraced Islam and solemnized a second marriage. The question was raised whether the status of second marriage will be valid without dissolving the first one. The court in this case held that there was to be only one nation and therefore no community could claim to be a separate entity on the basis of religion.
In the judgment of Kerala High Court, it was stated that it is not a mandate to codify all the laws related to religious community.[v] The court further stated that there is a need to bring amendment in the marriage laws of the country particularly with reference to Triple Talaq. It is possible to have a common code at least for marriages in India to bring the women on equal status.

The Preamble of the Indian Constitution envisages India as a secular country. There are many communities prevailing in India which is not even known. The need of the hour is to make uniform laws for everyone so that backward communities do not suffer. Now a day there is an ongoing problem in the divorce cases and that is where the need to make registration of marriages is compulsory. All the personal laws have few provisions discriminating women and children. These laws have to be changed, not only on the basis of uniformity but on equality and justice.

This blog is authored by- Iqra Taufique