“Masculinity is not something given to you, but something you gain. And you gain it by winning small battles with honour”. – Norman Mailer

A child is born at birth only with gender identity. As a person gets acquainted with his social environment, his identity changes according to social beliefs like caste, class, work and behaviour.
Then, even if he was born with any gender identity the person has to do clothes, thinking, functioning and behaviour according to his social identity. For example, it is natural for a child to cry but according to social identity, crying is taboo for men while crying is not taboo for women. We will find many such examples that force socially male, female and transgender into a social mould. Similarly, patriarchal thinking forces men to mould themselves into a particular kind of mould by seeing the temptation of privileges. Men are measured on ‘manhood’ scales born of patriarchy. In order to make up with these parameters, men are ready to go to any extent. From risky actions to violence, topping every scale as if these are other rules for manhood. 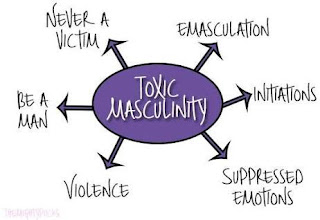 What is The Definition of Toxic Manhood?

Toxic masculinity can be thought of as “hyper-masculinity”, with a narrow and oppressive description of masculinity defined by violence, sex, status, and aggression.
Another word tied to poisonous manhood is “hegemonic manhood.” It is defined as a practice that legitimizes the dominant status of men in society and justifies the subjugation of women and other marginalized ways of being men.
The Urban Dictionary refers to toxic poisoning as “a social science term that describes narrowly repressive types of ideas about the male gender role and that defines masculinity as exaggerated masculine traits.” Toxic masculinity may also suggest that men who commit too much emotional or violent acts are not “real men”.

Manhood is not same as toxic poisoning. It is possible to be “masculine” without exhibiting toxic masculinity characteristics.
What are the characteristics of manhood, and how “non-toxic manhood” look like? Many believe that “traditional masculinity” includes characteristics such as leadership, the strength of purpose, security, and what it is right to do despite of its emotional cost. The goal among those fighting toxic manhood is not to discourage men from pursuing these symptoms. Organizations like “The Good Men Project” offer the following ideas of what “positive-masculinity” might look like:

Where Did Toxic Poisoning Come From?

The idea that men have had toxic manhood for a long time. In the past, society was established to preserve men’s privilege in terms of family power, wealth, and political control. Of course, during the twentieth century, women in the Western world gained more and more freedom – in principle – equality was achieved not only the persistent concept of poisonous masculinity is when you consider all the cultural methods that men maintain the status quo.
Sexist comments, inappropriate touching, mild scenes of violence between boys, sexual favours and so-called male divisions are all examples of toxic masculinity. Of course, some people say that such activities have been completely abolished. It is said that, as the women’s liberation movement of the 1970s and the recent ‘Me Too’ movement have shown, they are not only continuing in the pocket but are still a large part of our culture. All too often, supporters of toxic masculinity are not rightly punished. They are left unquestioned.
Although keeping in mind some high-profile cases such as Harvey Weinstein, which focus on male’s attitude towards women, toxic masculinity also spreads from men to men. A case like Kevin Spacey suggests that male poisoning is not something that revolves solely on gender issues. According to above and other cases, male toxicity has became an important issue, so brands and institutions have increasingly felt the need to take action to improve their public image. Whether you like the word or not, the concept behind it is result of deep social change and the desire for more such changes. It is a word by which we all seems to be surrounded.

How Can it Affect Mental Health?

Toxic masculinity can affect the psychological state of a person who doesn’t meet these ‘phantom’ claims but feels pressure to do so.
The American Psychological Association note the risks of trying to adhere to those exaggerated masculine traits. Men and boys forced to hold tight these traits often experience adverse effects and face problems, such as:

Furthermore, as feeling emotional or talking openly about feelings go against these traditional masculine values, there’s the added risk that men experiencing mental state issues won’t search out professional care or maybe speak about their struggles with friends or family.

How To Combat Archaic Gender Roles-

Societal pressures, expectations from family and sexual partners, and even expectations of religious identities are often burdensome to a person seeking out his masculine identity. While some social, political, or religious groups may provide a collection of guidelines for a healthy sort of masculinity, it’s better for an individual to stick to their own definition, as long as it doesn’t harm themselves or others. A new definition of ‘what it means to be male’ might includes overall human experiences, such as:

This doesn’t mean abandoning all traditionally masculine traits including some traditionally masculine characteristics, like strength and adventure, may help some people in defining their own masculinity. However, these traits mustn’t conjure a person’s entire definition of masculinity but form just one small aspect of their own identity.
Importantly, masculinity isn’t something society, or any definition can instil in a person, neither it is something which can be removed. It’s up to every individual to define their identity. Expanding and integrating new concepts into an individual’s definition of masculinity may help them better understand and accept themselves et al.

Toxic manhood hurts everyone, whether it is women, men or children. If we look closely, it can be seen that patriarchy is the real root of such crimes. The masculinity born of patriarchy is not only putting such thoughts in the minds of the youth but is also promoting them.

How are these standards of masculinity that a man hides his sensitive feelings, love, and humanity behind violence, hatred, to gain it. After all, why love, kindness, crying and caring for each other cannot be the parameters of manhood. It is very important that we present examples of being a sensitive man in homes, schools, offices and streets so that violence and hatred do not have to be weaponized for the coming generations to achieve manhood standards. Today we need men who believe in expressions like love, kindness, caring for one another. Who doesn’t need anger and hatred to hide his tears. Only with such men we can create a beautiful society that is equal, just and dignified.

Image Source
This blog is authored by Divya Shree Nandini