What is a Gene?

Genes are the distinct units of DNA sequence that encode individual proteins. DNA has been considered as a person’s book of life which provides insights into the many dimensions of the person’s future. Each person has two replicas of each gene, one inherited from each parent. Genes are arranged sequentially, on a structure called chromosomes. Human beings have approximately 20,000 genes organized on their chromosomes. 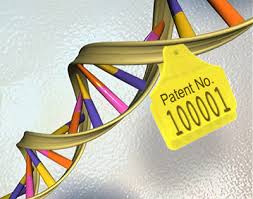 What is Gene Patent?

A gene patent corresponds to the exclusive right for a specific sequence of DNA (a gene) given by a government to someone who claims to have first identified the gene. Once it is granted, the patent holder controls how the gene can be used, in both business settings, such as clinical genetic testing, and in non-business settings, including research. This provide companies sole ownership on the genetic testing of patented genes. It generally contains a variety of claims but the most controversial of those are the so-called ‘isolated DNA’ namely a portion of DNA that have been removed from a cell. Gene Proponents often defend themselves by arguing that they didn’t patent the gene in the human body, but patented an isolated gene; which is true but it also means you can’t give your gene to your doctor and ask him to look at it say if it has any mutations without the permission of patent holder since they have all the exclusive rights over that gene. Long story short, the patent holder acquires the right to prohibit anyone from using that gene in research or clinical testing.

Can Genes be patented?

The very first question that comes in mind is that whether granting of patent rights over a gene will infringe the zone of personal privacy.[i] The patenting of genes and gene sequence may cause obstruction with privacy rights as it permits an intervention with bodily part. DNA is the foundational structure of life which is merely a product of nature whether it’s inside our bodies or sitting in the bottom of a test tube.

It is reserved exclusively to none to claim ownership, as Justice Sotomayor has rightly proclaimed that DNA is just nature sitting there.[ii]
Gene Patent is granted over two things-
1. Isolated and Purified Genes.
2. cDNA
An isolated gene is the one in which is introns are removed and cDNA is one which are synthetically created. In Association for Molecular Pathology v Myriad Genetics[iii] case two prominent issues were raised;
1. Whether isolated gene are patentable?
2. Whether cDNA is patentable?
It was held that the isolated genes or naturally occurring DNA is not patentable because it’s a product of nature but cDNA being made from scratch to a gene is patentable as they are synthetically created by human invention and does not come under the doctrine of ‘product of nature’.

Section 2(m) of the Patent Act, 1970 confines patentable subject matter to inventions, which is further limited by certain non-patentable inventions described u/s 3. Section 3(c) and section 3(j) are relevant here which when read together provides that mere discovery of any living thing occurring in nature, animals in whole or in part, and an essential biological process for production and propagation of plants and animals are non-patentable subject matters.

A gene is a product of nature/occurs in nature and shall therefore be regarded as non-patentable according to section 3(c) of the said act. A product of nature can only be discovered by us and no one can create/invent it. One cannot patent a product of nature in its original form. The Patent Office and the courts have never affirmed to give patentability to claims on what have been regarded as ‘true product of nature’. Alternatively, it may be said that lack of novelty makes that product non-patentable.
There is a difference between discovery and invention. A discovery adds to the human knowledge by revealing something which was already in existence but which has not been seen before, whereas an invention adds to the human knowledge by creating a new product or processes involving a technical advance as compared to the pre-existing knowledge. [iv]

The case of Dimond V Chakrabarty[v] marked the groundwork of a new era for the US Patent system which paved the way for patents connected with genetic technology. The court held that patent is claimed on a micro-organism which constituted a “manufacture” and thus qualified as patentable subject matter. The court found that patent claimant had produced a new bacterium with distinct characteristics from any found in nature and which had the potential for significant utility. The Court opined that the bacterium was altered to an adequate extent to qualify as an ‘invention’ and thus the mutated organism fulfilled the criterion of novelty and cannot a be considered as a product of nature. The Supreme Court adjudicated opining that patent umbrella can be expanded to anything that ‘man has made under the sun’.

However, recently the court changed its stance in the case of Myriad Genetics[vi] the Supreme Court unanimously ruled that naturally occurring genes and genetic sequences are ineligible for patent because naturally occurring DNA segment is a “product of nature” and does not become patent eligible merely because it has been ‘isolated’.
Although the Supreme Court ruled that genes cannot be patented, the controversial bill proposed tries to change the settled jurisprudence pushed by biopharmaceutical corporations and patent lawyers. The draft bill erases a precedent the Supreme Court laid out in the three unanimous rulings between 2012 and 2014. [vii] The bill proposed allows genes to be patented. It not only brings in the question of privacy as a right but it also reverses the settled jurisprudence of patent law on the ‘products of nature’.

Granting Gene Patents is nonetheless a great benefit to the society at large, provided it is only done for developmental purposes such as innovating cures of incurable diseases, innovating new advances in technologies etc. When the goal of these patents is only to build monetary benefits from that particular invention then the very purpose of granting patents is defeated (development and encouraging new inventions) and it becomes socially and morally wrong. The particular invention can be of great significance but the greedy nature of man will not allow him to extend gene patenting on a societal and global scale. However, owning patents over majority subject matters will also exploit and impact every developing and underdeveloped country. Since the country who has had maximum number of genes patented will overshadow the interests of the common people because they’ll be made available to the common public at insanely exorbitant prices which cannot be afforded by the majority section of the society.