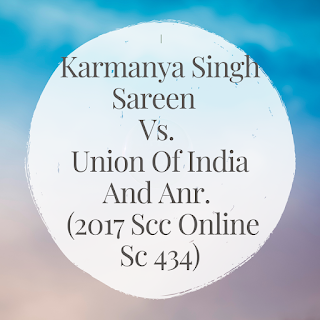 A. Since the relief is sought against the state, therefore, the writ is maintainable.
B. Entities and companies providing public service can and must be regulated. This argument was made referring to Professor Laurence Tribe on different manifestations of state power.
C. The myth of private contracts shall be attacked if it affects constitutional rights u/d Articles 14, 19, and 21.
D. The right to privacy can be even applied to non state actors.
E. Metadata was being shared between Facebook and WhatsApp apart from the content being shared.
F. WhatsApp’s policy of ‘take it or leave it’ contract violates A. 19(1)(a) as informed consent is a facet of A. 19(1)(a).
G. WhatsApp has gathered a large number of consumer base owing to their stringent privacy policy in their initial stage, now hidden consideration are imposed after building a loyal consumer base which is unconscionable bargain.

On 17th March, 2017
1. The users have voluntarily entered into the agreement and hence it is a consensual contract. Facebook and WhatsApp are private bodies and are therefore not menable to the writ jurisdiction of the High Court. Consequentially this SLP is also not maintainable because it arises out of the writ petition.
2. WhatsApp guarantees the secrecy of message content with the help of “end to end encryption” and thus neither Facebook nor WhatsApp has access and authority to content.
3. Petitioners tried to makeup personal harm and injustice into assertion public interest petition.
4. As the information shared by WhatsApp is not received by Facebook India Online Services Pvt. Ltd. and therefore the petition is not maintainable.
5. The petition against the Facebook India Online Services Pvt. Ltd. should be dismissed as the terms governing the use of Facebook services are entered between users located in India and Facebook Ireland Ltd.
6. Facebook India Online Services Limited does not own, operate, control or host the Facebook service or WhatsApp service or the servers that host the Facebook service or the WhatsApp service instead it deals with marketing support, technical support and sales support.
On 20th March, 2017
1. Telecom Service Providers don’t have any control, rights, and responsibilities for the content of Over-The-Top services (OTT) (services which are accessible over the internet and ride on private or governmental telecom operators for e.g. WhatsApp).
2. A consultation paper on regulating OTT has been issued by TRAI and recommendations are yet to submitted to the Department of Telecommunication.
3. Department of Telecommunications shall finalize policy direction on their regulatory and licensing framework for OTT services.
4. A committee on net neutrality has been formed for consideration of economic, security, privacy, innovation, etc., related to OTT services.

The court shall be approached in case of misuse of data and not against its possibility of being misused.

ANALYSIS OF THE CASE

This case concerns the WhatsApp’s privacy policy which is an internet messaging service. The privacy policy permits WhatsApp to share its data with Facebook and all its group companies for the purposes of commercial advertising and marketing. The privacy policy has been challenged as violating of the right to privacy.
At the time of buying WhatsApp from the founders in $19 billion, it was nowhere mentioned that there would be change in privacy policy if there is ‘Takeover’ instead it was change of policy could be possible if there is merger. The privacy policy which is formulated by WhatsApp after the takeover is unconscionable and is unacceptable and also gets affected from constitutional vulnerability since it maladroitly affects the freedom which is a cherished right of privacy of an individual under the Constitution. When the writ was filed with Delhi High Court it didn’t take into consideration the infringement of the right of the citizen of India instead rejected the petition. After this type of case the government was in need to make the Data Protection Policy, complying the guidelines set for protection of Right to Privacy of its citizen on the OTT as well as non-OTT platforms.